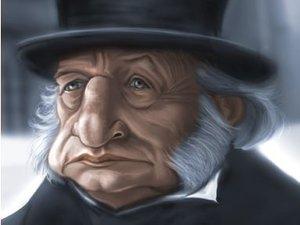 As Charles Dickens himself admits, Ebenezer Scrooge is a thoroughly peaceful man, guilty of no true crime, who has robbed no one. Therefore, we must conclude that his wealth is a sign of his ability to please at least some people, and as Michael Levin notes: “Dickens doesn't mention Scrooge's satisfied customers, but there must have been plenty of them for Scrooge to have gotten so rich.”

But as he is a person with bad manners and a disagreeable personality, many have conflated Scrooge’s personality traits with his business practices, although the two are unrelated phenomena. As a miser and businessman, Scrooge provides numerous valuable services to the community including, as Walter Block has shown, driving down prices and making liquidity available to those who, unlike the wrongly maligned misers, have been either unwilling or unable to save in comparable amounts.

His business prowess notwithstanding, however, a closer look at Scrooge’s economics suggests some significant blind spots in several areas. Scrooge, as displayed in many of his comments and observations, misunderstands some key economics concepts. Indeed, Scrooge’s ignorance in these areas may contribute to his bad habit of assuming that others are taking advantage of him, or are too foolish or lazy to attain what Scrooge has.

As Carl Menger demonstrated long ago, value is subjective and different persons value goods differently depending on the person’s goals in life. Does the person want to raise a family? Perhaps he wishes to be an independent scholar who devotes all his time to reading and research. Perhaps he wishes to be a hermit who prays most of the day. Money prices reflect these goals, and a hermit will value a video game console differently from a gamer. But of course not everything can be calculated in terms of money prices. A like or dislike of Christmas, for example, cannot be calculated this way.

Scrooge, who is apparently not a Christmas enthusiast, greatly values money, and likes to have plenty of it handy. But why? If we accept the analysis of Scrooge’s former fiancée, (a fairly reliable source on that period in his life) she suggests that Scrooge “fear[s] the world too much” and that all his other hopes “have merged into the hope of being beyond the chance of its sordid reproach.”

So here we see the real root of Scrooge’s fondness of money. In Human Action, Ludwig von Mises explained that human action stems from a desire to “remove unease” about one’s present situation. With Scrooge we see (if his fiancée is to be believed) that the thought of being destitute is a source of constant unease for him. Thus, he desires to build as much wealth as possible in the hope of being beyond the possibility of poverty.

As Scrooge’s primary goals is poverty avoidance, this colors how he views all economic action. His peers tend to not recognize this in him, either dismissing his as simply “odious,” as Mrs. Cratchit does, or as unhappy.

In fact, as Levin demonstrates, Scrooge appears rather content with his situation at this point, although, unfortunately — just as Scrooge’s colleagues and family members do not appreciate his ranking of values — Scrooge does not seem to appreciate that others might value money for different reasons.

Fred is probably wrong about Scrooge being morose, and he also appears to not understand why Scrooge values money.

But at the same time, Scrooge also displays an ignorance of value subjectivity by suggesting that Fred’s ability to be merry is rendered impossible by his poverty.

(Now, in this case, “poverty” as used by Scrooge is a highly relative term. We know from the text that Fred enjoys a comfortable middle-class lifestyle in which he can afford a servant girl, plenty of lamplight, and a Christmas feast for his many friends. Moreover, Fred’s wife is, according to Scrooge’s own assessment, “exceedingly pretty.”)

In this same exchange, although Fred doesn’t understand how Scrooge could be happy, it is Fred who displays a better understanding of economic value when, in response to Scrooge’s declaration of Fred’s poverty, Fred declares “There are many things from which I might have derived good by which I have not profited.” By this, Fred means that he profits from many things which bring him no money profits.

It is often supposed by both critics and defenders of Scrooge (and by Scrooge himself) that he is a more skilled businessman than most, and that he is more savvy, more intelligent, and more prudent in his management of his own affairs. Other people, Scrooge supposes, are more likely to be incautious and trust to fate for good fortune.

But there is ample evidence that the lack of material wealth enjoyed by others is not due to any lack of intelligence or prudence, but simply that they value things differently from Scrooge.

Scrooge’s ex-fiancée, for example, is no fool when it comes to money. In her final conversation with Scrooge, she notes that when she and Scrooge had agreed to marry, it was assumed that they would be poor in the beginning, but that “we could improve our worldly fortune by our patient industry.” In this, she is expressing what most young heads of household know — that in most circumstances, households build wealth slowly, since raising a family is costly. Her words hardly suggest a woman who plans to throw caution to the wind.

There is no denying that Scrooge is highly skilled at attaining what he values, (i.e., large amounts of material wealth in the form of cash and revenue-producing capital) but it does not follow that others do not possess these things because they are less intelligent or less industrious. Others simply value other things in life such as child rearing, Christmas celebrations, and consumption as well as the things that can be obtained by “patient industry.”

Scrooge is quick to assume that others are imprudent for marrying (he is dismayed by his nephew’s decision to marry for love) or doing other activities they find to be pleasurable when those same energies could be devoted to making money. But Scrooge is simply imposing his value systems on others, although in this, he is no more guilty than Dickens, Fred, and all the others who insist that Scrooge absolutely must celebrate Christmas.

In addition to lacking insight on the subjective nature of value, Scrooge also fails to understand the intricacies of voluntary exchange.

Much is made by Dickens of how Cratchit is the hapless victim of Scrooge’s miserliness, and in response, the contrarians note that if Cratchit were indeed underpaid, as Dickens implies, then Cratchit is free to find employment elsewhere.

This is no doubt true, all things being equal, but we also find that Scrooge himself, well before his change of heart at the end of the story, is open to re-negotiating the terms of Cratchit’s employment. Scrooge denies his openness to renegotiation in words, but shows it with his actions.

When Cratchit asks for a vacation day on Christmas day, Scrooge claims that this is akin to “picking a man’s pocket,” but ultimately, Cratchit negotiates for himself the day off, with nothing more than a tepid “be here all the earlier next morning,” from Scrooge. Scrooge was not compelled to give Cratchit the day off, so given Scrooge’s clearly demonstrated immunity to social pressures, it stands to reason that Scrooge concluded it was more profitable to give Cratchit the day off than face the possibility of losing Cratchit as his clerk. But even if he were susceptible to being shamed into giving the day off, he is nonetheless voluntarily doing so.

At this point, Scrooge shows that his claim of having his pocket picked is sheer nonsense since we plainly see that his demonstrated preference was to grant the day off. Scrooge cannot now claim that he was somehow robbed. If he felt he was being robbed, he could have denied Cratchit the day off. It turns out, however, that Cratchit, while not “underpaid,” is at least seen as a bargain employee by Scrooge, and so much so that Scrooge felt he could afford to voluntarily pay Cratchit a small raise in the form of a day off.

Ebenezer Scrooge asks very little of his fellow human beings. He only asks that they keep up their ends of the bargains in the business agreements they make. It was just his misfortune, then, that he is surrounded by a bevy of control freaks who are hell bent on making sure Scrooge enjoys Christmas in just the way they want him to.

Scrooge returns the favor by maintaining a ferociously low opinion of most others around him, concluding quite often that others are simply fools for choosing to enjoy the company of friends and family when there’s money to be made.

Ultimately, though, it’s all just an unfortunate misunderstanding, and one that might be improved by a reading of Man, Economy, and State.