The Correct Theory of Probability 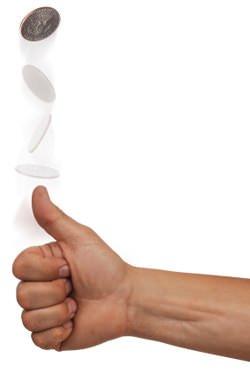 Ludwig von Mises's brother, Richard, was a distinguished mathematician, philosopher, and aeronautical engineer. While, in contrast to Ludwig, Richard was an ardent positivist, he made a distinguished contribution to probability theory that has important implications for a sound approach to the social sciences.

While probability theory is generally thought of as a branch of mathematics, its foundations are purely philosophic, and Richard von Mises, in his great work Probability, Statistics, and Truth, developed the correct, objective, or "frequency" theory of probability.

Writing clearly and nonmathematically as a philosopher, von Mises examined the nature of the probability fraction; what, for example, does it mean to say that the probability of a die coming up as a two-spot is one-sixth?

Richard, in a probability theory later adopted by Ludwig, demonstrated that it is meaningless to say that the probability of each throw coming up two is one-sixth; what the fraction means is this: if the die is not loaded, and if it is thrown a very large number of times, it will tend asymptotically to come up as a two one-sixth of the time. And the only way you can really make sure that the die is not loaded, i.e., that the two-spot will come up one-sixth of the time is to make the very large number of throws.

The contrasting theories of probability maintain that the probability fraction is subjective, that the fraction refers to the subjective belief or hunch in the minds of each person, and therefore that probability theory can be applied to the individual case.

The implications for social science — for the study of human action — of the contrasting theories are profound. For, if one holds to the objective Mises theory, it is unscientific and illegitimate to apply probability theory to any situations where the events (like the tossing of a die) are not strictly homogenous, and repeated a large number of times. And since, outside of die tossing or roulette, all the events of human action, economic or political or in daily life are clearly not homogeneous and therefore not repeatable, the Mises view demonstrates that all use of probability theory in social science is illegitimate.

Hence, it is scientifically meaningless to say that the "probability of Jerry Ford being elected in 1976 is three-eighths," since elections are not homogeneous events repeated a large number of times. And yet a large amount of modern social science and of its mathematizing rests on this faulty view of probability theory.

Since, as one might expect, the Mises view of probability has been neglected in recent years, it is good to see the Gillies book carry on the tradition and the argument. While Gillies deviates, in most ways unfortunately, from the pure Mises line, his book is a thorough, largely nonmathematical evaluation of the current state of the debate.