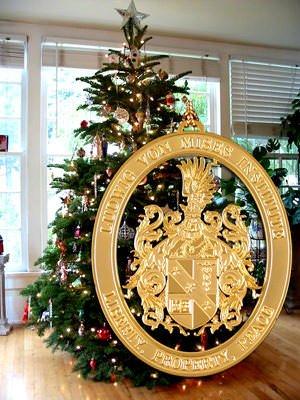 Christmas is a make-or-break time for many retailers, and the holiday season's importance to the American economy is so great that "Black Friday" sales at some retailers, particularly Wal-Mart, are reported as a macroeconomic indicator. The holiday season is indeed festive and inspiring even in spite of clichéd paeans against the "commercialism" of Christmas. But does the Christmastime "bacchanalia of peace on Earth and goodwill towards men" promote economic growth or not?

This is an intriguing question, for the holidays are (rightly, in my view) a time of liberality and generosity toward our friends, families, and fellows. However, it is important to remember that consumption is precisely that — consumption, and not production. Moreover, it is not clear that the resources we use to enable consumption are always used efficiently or effectively. Joel Waldfogel once wrote an article in the American Economic Review about "the deadweight loss of Christmas,"

suggesting that the institution of gift-giving may be economically inefficient if we consider only the preferences of the recipient. (In response, Jeffrey Tucker defends gift-giving in The Free Market, a Mises Institute publication)

One of my favorite Christmas stories is A Christmas Carol, but my reasons for liking it so much have changed over the years. As I've learned more economics, I've come to see that Ebenezer Scrooge's tight-fisted, miserly ways have some admirable qualities. Michael Levin makes this point in a Mises.org Daily Article that is usually re-posted around the holidays, and Steven Landsburg also discusses the economics of miserliness in an article he wrote for Slate several years ago.

While Scrooge may have indeed been a wretched person (more on that in a minute), Landsburg points out that Scrooge's miserly ways should be celebrated, not scorned. Scrooge devotes almost all of his time and energy to the production of wealth, but he consumes very little, choosing instead to prepare his own meager meals, apparently refusing to hire domestic help, and in one of the story's most vivid illustrations of his cold-heartedness, steadfastly refusing to allow his employee Bob Cratchit to burn another lump of coal on Christmas Eve.

We are supposed to be horrified. However, Scrooge's penny-pinching in fact redounds to the benefit of all mankind, to borrow a phrase from F.A. Hayek, for in being so tight with his money Scrooge leaves valuable resources unconsumed. He prefers to shiver (or to wear a coat indoors) than to use his wealth to bid into his service additional coal or the labor and capital necessary to produce it. Landsburg points out that he employs no one to clean his house or cook his meals. This leaves, if not necessarily coal or domestic labor, at least the labor and capital that would have otherwise produced coal, dust-free floors, and hot food available to produce goods for others.

This is half true. If we refrain from consumption and save more, inventories of current consumption goods will indeed accumulate. Retailers' profits will fall, and perhaps some retailers might have to lay people off. As inventories accumulate, prices for these goods should fall to re-establish equality between quantity supplied and quantity demanded, and perhaps some will be dissuaded from entering the retail sector.

The other half of the story, however, is that, as Auburn University economist Roger Garrison has argued (and I paraphrase), people save up for something. They don't just save for the sake of saving. Presumably, they are saving so that they can consume future output. If people decide to save instead of consuming, this will reduce interest rates. The lower interest rate suggests to producers and investors that people want to consume in the future rather than today. They will then invest relatively more in future output and relatively less in present output. For example, as the population ages we will likely need more late-life medical care. Thus, firms might invest more in the development of future medical technologies.

Christmas is often the time when we think it well that we should make some slight provision for the poor and destitute. In his recent book Discover Your Inner Economist, George Mason University economist Tyler Cowen makes several interesting observations about charity, observations that are perhaps appropriate for a discipline called "the dismal science." As we know that people respond to incentives, if we increase the returns to begging we will see more begging. Cowen points out that in some desperately poor parts of India, people invest resources in attempting to seem more helpless, going so far as to pay to have limbs amputated because it increases charitable alms. Such expenditures are clearly wasteful.

This is discouraging, especially for one who seeks to help others, but it is a necessary implication of changing incentives. Cowen suggests an interesting solution: the most efficient social transfer is accomplished if one gives to those who look like they least expect it. While we may allow concessions for exceptional circumstances, indiscriminate charity may actually be wasteful.

Scrooge's reluctance to spend money meant that he contributed to the pool of unconsumed resources that we use to produce tomorrow's output. It is true that greater liberality in the form of higher wages, charity, or opulence might manifest itself in observable increases in someone's wealth (buying a prize turkey for the Cratchits, for example, or giving to charity). The benevolent offices executed by Scrooge's saving are harder to see, but they are nonetheless there. Every penny Scrooge saved was a penny available to lend to someone to start or expand a business. While he stands as a symbol of self-centered greed, Scrooge's penny-pinching provided unseen help to many.

Should we be depressed? In my view, no; we should be optimistic. Christmas is a joyous and festive time, and the economics of Christmas shouldn't spoil the fun. At the same time, however, we shouldn't harbor any illusions about Christmastime consumption providing a "boost" to the economy or anything like that. Consumption reduces the stock of goods available for use in future production. While there is certainly nothing wrong with this, it is important to remember that stories of Holiday spending-induced economic growth may be misleading.