GET NEWS AND ARTICLES IN YOUR INBOXPrint
A
A
Home | Mises Library | Capitalism, Socialism, and Democracy 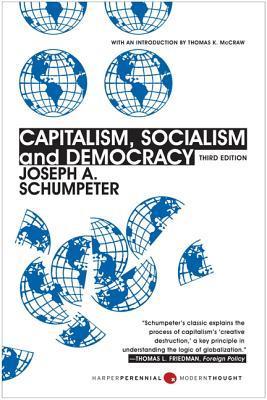 Capitalism, Socialism, and Democracy is packed with scintillating insight on all the topics that really matter: capitalism and its future, the absurdities of socialism, the dangers of democratic rule, the future of freedom, and the social dynamics that protect and undermine freedom.

Schumpeter himself cannot be called a member of the Austrian School but he emerges from within its culture and among its leading thinkers. Schumpeter went his own way with an eclectic and unsystematic theory of economics. But he is second to none in the integration of social, political, and economic thought. He understood Marxism and capitalist theory as well as any of his contemporaries, and managed to keep enough distance from the affair of the day to observe the big trends and the dynamics pushing them.

It was written in 1942 and its importance has grown year by year to the point that no student of the liberal society can afford not to read and master this treatise. It is most famous for its prediction that capitalism is unsustainable not because it is a flawed system but rather because voters and bureaucrats in an otherwise free society will fail to protect capitalism from its enemies.

He is particularly ruthless in observing how people take the triumphs of capitalism for granted, and how even those who benefit most from its productivity tend to be the same people who want the capitalist process shut down in their own self-interest.

Not everything he says in here is prophetic but he makes the reader think hard about the big issues in society. His most lasting contribution is his insight that capitalism is a process of creative destruction, constantly bringing us new innovations and wiping out the old ways. Thus does the free society insist on relentless adaption to progress - and he has grave doubts that people are culturally prepared for this process. Insofar as the democratic process allows them to do so, the public will turn on freedom, he predicts, and smash the source of its own well being.

Schumpeter was also a pioneer in doing what Rothbard later perfected: drawing from both left and right to forge a new path forward. (Rothbard, in particular, was a huge fan of this work.)

Rather than being a gloomy book, as one might think, the prose is bursting with energy, creativity, and insight - and has a lasting power to provoke deep thought on the social, cultural, and intellectual foundations of the economic order.

Schumpeter was never better than in his crafting of this masterpiece, and no one serious about social and economic thought can fail to benefit from his provocations.

Some thoughts from Schumpeter herein:

Capitalism, Socialism, and Democracy is packed with scintillating insight...

Shumpeter presents a theory of how states become empires and applies his insight to explaining many historical...