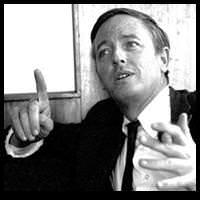 [In his 20s, Murray Rothbard wrote a newsletter called The Vigil, in which he wrote the following review of William F. Buckley, Jr., "A Young Republican View," The Commonweal, January 25, 1952.]

Buckley's article in the recent issue of this Catholic magazine is significant in its revelation of the full extent of Buckley's views. As a result, we congratulate ourselves for treating the Buckley Boom on the intellectual Right with considerable skepticism. The article is completely deplorable, and reveals the morass into which the individualists of today have sunk.

The brief article begins splendidly, with the affirmation that our enemy is the State, and excellent quotations from such great individualists as Albert Jay Nock, Herbert Spencer, and H.L. Mencken. Buckley declares that the great issue of our time is freedom vs. Statism, and sides with Spencer that the State is "begotten of aggression and by aggression." He goes on to castigate the Republican Party for offering no real alternative to the Statist power-drive. It begins to appear that young Buckley is indeed a welcome newcomer to the libertarian ranks.

But such an illusion is not destined to remain very long. It soon appears that Buckley is really, in 1952 terms, a totalitarian socialist, and what is more, admits it.

He admits that his opposition to Statism, eloquently expressed at the beginning, is merely romantic academicism. For Buckley favors "the extensive and productive tax laws that are needed to support a vigorous anti-Communist foreign policy," and by implication supports ECA aid and 50-billion dollar "defense" budgets. He declares that the "thus far invincible aggressiveness of the Soviet Union imminently threatens U.S. security," and that therefore "we have got to accept Big Government for the duration — for neither an offensive nor a defensive war can be waged … except through the instrumentality of a totalitarian bureaucracy within our shores." Therefore, he concludes, we must all support "large armies and air forces, atomic energy, central intelligence, war production boards and the attendant centralization of power in Washington — even with Truman at the reins of it all."

In the light of this errant nonsense, Buckley, considered by practically everybody (and, saddest to relate, by himself) as an "extreme individualist" must be classified as a defacto totalitarian.

This unhappy incident reveals that individualism is practically non-existent in present-day America, and that the biggest and most important defection stems from the uncritical support given to the wasteful, dictatorial policy of military-socialism that now prevails. It spurs us on to continue our analysis of foreign policy and formulate a program in that field. But it is certainly clear that our foreign policy must not be aimed at holy crusades against Communist infidels. Neither should it be based on a policy of blithely and enthusiastically taxing the American citizen in order to pile up useless armaments. Freedom and peace are inherently intertwined, and the way to preserve peace is to avoid war, not to go out of your way to seek one. The best rule for foreign policy is still the great Richard Cobden's "Peace and Retrenchment."