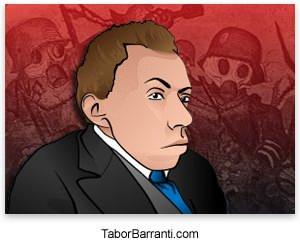 "War is the health of the State."

The famous seven words appeared in an unfinished manuscript written by the progressive essayist Randolph Silliman Bourne (1886-1918) during World War I. In a collection of Bourne's essays entitled War and the Intellectuals (1964), editor Carl Resek explained the phrase's meaning. Resek wrote, "In its proper place it [the saying] meant that mindless power thrived on war because war corrupted a nation's moral fabric and especially corrupted its intellectuals." The seven words contain a complexity of meaning that is often overlooked by those who use it.

America has been at war for over a decade now and hostilities are not abating. Quite the opposite. American troops and clout have spread across the Arab world and the Middle East, leaving casualties heaped and enemies gathering. If economic emergencies usher in conflict, then more war is coming. The complexity of Bourne's insights needs to be explored in order to deprive the state of as much health as possible.

The State, Government, and Society

In times of peace, Bourne believed the majority of people pursued their own interests according to their own values. They worked and cooperated with each other, married and raised children without paying much attention to the state. Instead, they dealt with the government. Bourne defined government as

a framework of the administration of laws, and the carrying out of the public force. Government is the idea of the State put into practical operation in the hands of definite, concrete, fallible men.

Government was the practical day-to-day "offices and functions" of a state such as the post office or the public school system, with which people came into contact as they simply pursued life. There was no ritual and no singing of national anthems as postage stamps were purchased. The civil servants whose jobs make government function had no sense of sanctity about them. Indeed, Bourne described them as "common and unsanctified men." He believed this was a salutary situation and a reflection of America's egalitarianism.

Meanwhile, the average person rarely dealt with the state — that is, with institutions that were sanctified and expressed the "enduring" state, such as the Supreme Court. Thus in times of peace, Bourne wrote, "the sense of the State almost fades out of the consciousness of men."

In other words, the state is more of a concept than a physical reality. In the United States, it is the political structure established after the American Revolution that is embodied in the Constitution and Bill of Rights. It claims a chain of legitimacy that dates back to President George Washington. While governments come and go with elections, the state remains essentially the same — only growing stronger with time. It is the state rather than government that inspires emotions such as awe or patriotism. It is to the concept of the American state — not to any particular government, Republican or Democratic — to which people pledge allegiance with hands placed over their hearts.

Meanwhile, "society" functions differently from the state, government, or the self-interested individual. Society, which Bourne refers to as "nation" or "country," is the collection of factors that constitute American life. They include characteristic attitudes, common lore and literature, religious convictions, a shared history, and the prevailing cultural norms. They are the nonpolitical factors that make American society different from Chinese or French societies. In times of peace, Bourne believed most people identified more closely with society than they did with government. For example, most people defined themselves most closely in relationship to a community, religion, or ethnic heritage rather than to a political party.

Unlike government, society is not an expression of the state, nor can it peacefully coexist with the state; the two concepts are antagonistic. In an essay entitled The State in which the first section is entitled "War is the health of the State," Bourne observes,

Country [society] is a concept of peace, tolerance, of living and letting live. But State is essentially a concept of power, of competition; it signifies a group in its aggressive aspects. And we have the misfortune of being born not only into a country but into a State, and as we grow up we learn to mingle the two feelings into a hopeless confusion.

To sum up Bourne's preceding argument: in times of peace, people pursue their own self-interest, identify with society, interact with government, and only occasionally encounter the sanctified state.

The Impact of War

Bourne defined war as the ultimate act of statehood, as the utmost act of "a group in its aggressive aspects." He wrote, "War is a function … of States," and it could not exist except in such a system.

Bourne argued further that war blurs or erases the lines that separate government from the state and both of them from society. The blurring happens largely within the individual himself. Stoked by emotion, the average person fills with patriotism and loses "all sense of the distinction between State, nation and government." Bourne described the process:

Patriotism becomes the dominant feeling, and produces immediately that intense and hopeless confusion between the relations which the individual bears and should bear towards the society of which he is a part.

In times of war, the government and state become virtually identical, so that to oppose the government becomes an act of disloyalty to the state. For example, although criticizing the president or military attitudes is a right regularly exercised by Americans in peace time, such criticism becomes an act of treason when war has just been declared. As Bourne explained,

objections to the war, luke-warm opinions concerning the necessity or the beauty of conscription, are made subject to ferocious penalties, far exceeding in severity those affixed to actual pragmatic crimes.

Thus, in wartime, individuals who only casually interacted with the government now become fervid defenders of the state.

Every individual citizen who in peace times had no function to perform by which he could imagine himself an expression or living fragment of the State becomes an active amateur agent … in reporting spies and disloyalists, in raising Government funds, or in propagating such measures as are considered necessary by officialdom.

The activities of society — from the words spoken at pulpits to those written in newspapers, from economic exchanges to entertainment — begin to conform with the purposes of the state rather than the self-interest of individuals.

As society and government merge into the state, the individual begins to disappear. The individual becomes part of what Bourne called "the herd." He described the term: "The State is the organization of the herd to act offensively or defensively against another herd similarly organized."

Bourne acknowledged that the herd was not an emotional or intellectual whole but included a wide range of reactions to events and to war itself. Nevertheless, "by an ingenious mixture of cajolery, agitation, intimidation, the herd is licked into shape, into an effective mechanical unity, if not into a spiritual whole."

Moreover, the state used powerful inducements to convince people to "choose" to enlist or otherwise support the war effort. Individuals usually agreed, reluctantly or not, because in "a nation at war, every citizen identifies himself with the whole, and feels immensely strengthened in that identification."

But if an individual refused, then the state revealed that choice was never a real issue.

And, so, individuals obey wartime measures even to the point of risking their lives on battlefields. People cease to be individuals acting in self-interest and become citizens of the state acting in concert. The man who dissents and remains an individual feels "forlorn and helpless," while those who think and feel collectively have "the warm feeling of obedience, the soothing irresponsibility of protection."

Bourne concluded, "people at war become in the most literal sense obedient, respectful, trustful children again, full of that naive faith in the all-wisdom and all-power of the adult who takes care of them."

What he referred to as "this great herd-machine" functioned under "a most indescribable confusion of democratic pride and personal fear" that makes the individuals who constitute the herd "submit to the destruction of their livelihood if not their lives, in a way that would formerly have seemed to them so obnoxious as to be incredible."

The individual became a "child on the back of a mad elephant" that he could neither control nor abandon but was compelled to ride until the elephant decided to halt.

Bourne's essays are not typical of antiwar literature in that they provide little critique of specific policies. He does not dwell upon the "Butcher's Bill" of dead soldiers and civilians. He does not rail against the profits reaped by the military-industrial complex, which were then collectively known as "the munitions makers." Bourne's essays attack the sanctity of war by showing how it leads to the moral collapse of society by destroying the peaceful interactions and principles on which society rests.

Bourne eloquently argued that postwar America would be morally, intellectually, and psychologically impoverished. By this observation, Bourne did not mean that peacetime America would struggle under an increased bureaucracy that never seems to roll back to prewar levels. Many historians have made this point. Again, he was addressing less tangible, though arguably more lasting, costs of war. For example, post-1918 America would be burdened by intellectuals who had "forgotten that the real enemy is War rather than imperial Germany." In converting WWI into the equivalent of a holy war, the intellectual and psychological groundwork was laid for a future filled with what he termed "the sport of the upper class" — global conflict. But, then, the impact of war on intellectuals is the theme for a future article and it was addressed by Bourne in his second most acclaimed essay "The War and the Intellectuals."