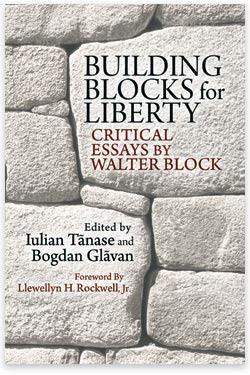 Murray Rothbard, in his life, was known as Mr. Libertarian. We can make a solid case that the title now belongs to Walter Block, a student of Rothbard's whose own vita is as thick as a phone book, as diverse as Wikipedia. Whether he is writing on economic theory, ethics, political secession, drugs, roads, education, monetary policy, social theory, unions, political language, or anything else, his prose burns with a passion for this single idea: if human problems are to be solved, the solution is to be found by permitting greater liberty.

Yes, Walter Block is provocative. He is an admitted anarchocapitalist, and his signature treatise is called Defending the Undefendable. But readers who spend time with his prose discover that there is far more to the Blockian method than simply breaking taboos. He is provocative not just because of his conclusions but also because he is relentlessly logical, unfailingly truthful, and unusually sincere. He wants answers to the most vexing human problems — whether they are small or large — and he is going to pursue that truth as far as human reasoning can take him.

I can recall looking through correspondence that Professor Block has had with colleagues in topics such as monetary policy, letters in which Block is sharply in disagreement with his correspondent. His argument on behalf of his position is so pointed and attractive that his opponent cannot resist attempting an answer, but of course that only elicits yet another response, and yet another rejoinder, and another response, and so on. The rounds of correspondence can go on for dozens of interchanges. Block persists not because he wants to beat anyone down, but because he is so sincere about finding truth and ferreting out error. If he is wrong about a point, he wants to know it. That's why his opponents always end up on the hot seat.

There is another aspect to his work that should be noted. His public persona is as a plumb-line libertarian, but his method and mode of argument come from his core training in the science of economics. He deploys economic tools in the service of finding answers to social problems. This shows up not only in his exposition; he is also an inspired teacher who never misses a chance to present his argument step by step so that the reader can come to understand economic logic along the way.

You might be surprised at how reasonable-sounding Block can make what might otherwise be considered an outrageous idea. Not every reader will accept every one of Block's conclusions. But everyone will learn how a top-notch economic thinker in the Austrian tradition approaches a huge range of issues. If you disagree with him, you would do well to do so with the same method: that of thinking through problems with close attention to logical and analytical detail.

There is one final trait of Block that might be overlooked: his humility. In a world of academics with inflated egos and selfish ambitions, Block displays constant sincerity, even a kind of naïveté in believing that the truth demonstrated with patience and logic should be enough to carry the day. In our politicized world of charlatans and agenda-driven ideologues, this is rarely the case, of course. But Block charms us with his truth-seeking way, his desire to engage counterarguments of any sort, and his willingness to be shown where he is wrong.

A volume of all the "critical essays" by Walter Block would surely run into thousands of pages. But this is an excellent sampling, and a great tribute to one of the most inspired and hardworking intellectuals of our time.