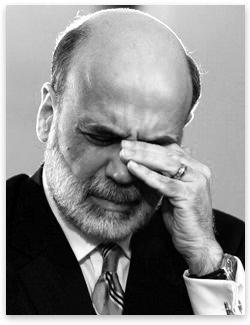 The strangest thing about the ongoing financial crisis is that US Fed Chairman Ben Bernanke has so far come out of it relatively unscathed. Except for the narrowing of some credit spreads over the last few months, economic indicators have not sustainably improved since Bernanke initially moved to address the crisis. In fact, matters have grown significantly worse.

Most observers have seen little or no connection here. But there is one. By setting interest rates too low right from the outset, Bernanke aggravated the crisis. He did so by putting a destructive chain of events in motion, starting in the foreign-exchange market, then moving into the oil-trading pits, the latter eventually making itself felt in the economy, and all of this culminating in the financial conflagration experienced this past fall.

The story begins on August 9, 2007, when BNP Paribas, a leading French bank, announced that it was closing three of its funds due to losses on US subprime mortgage securities, news that roiled credit markets worldwide. In the ensuing week, a cacophony of voices from Wall Street implored the Fed to cut rates. But with inflation running in the upper level of the Fed's target range, Bernanke tried to forge a nuanced response.

On August 16, the Fed lowered the discount rate at which the Fed lends to commercial banks by half a percent, leaving untouched the federal-funds rate at which commercial banks lend to each other. The idea was to make it less costly for troubled banks to borrow from the Fed without incurring the risk of stoking inflation through the imposition of lower rates in the general economy.

Yet just over a month later, even though markets had stabilized, Bernanke's Fed relented to Wall Street's pressure, reducing the federal-funds rate as well by a half a percent to 4.75%. It was the first in a series of moves that would see that benchmark rate taken down to 2.75% by the spring of 2008.

Before this loosening of monetary policy began, the Fed had only recently managed to bring interest rates up to a reasonable level. This is evidenced by the Taylor rule, named after Stanford University Professor John B. Taylor, which states that the appropriate interest rate ought to reflect the discrepancy between the actual and optimal rates of economic growth and inflation.

By this standard, after having been established rightly since late 2006, Bernanke's swift rate cutting drove the price of credit below the point dictated by the Taylor rule. This deviation was mostly owing to the fact that inflation kept on rising in the fall of 2007 and well into 2008, going above 5% in the spring.
Clearly, Bernanke discounted this disturbing price trend because of his previous scholarly work on the Depression. This had convinced him that the Fed in the 1930s was chiefly responsible for the economy's breakdown by not doing enough, amid grievous stresses in the financial system, to provide liquidity.

At the 90th birthday celebration for Milton Friedman, who had famously argued that thesis along with Anna Schwartz in A Monetary History of the United States, Bernanke said,

Let me end my talk by abusing slightly my status as an official representative of the Federal Reserve System. I would like to say to Milton and Anna: Regarding the Great Depression. You're right, we did it. We're very sorry. But thanks to you, we won't do it again.

Guided by this interpretation of economic history, Bernanke wreaked havoc on the US dollar. Between the time that the news from BNP Paribas alarmed the markets and the Fed's first rate cut, the greenback actually rallied against the Euro on a flight to safety. But when that cut was made on August 16, 2007, the rally was snuffed out and the US dollar entered a steady descent, from €0.746 to €0.625 in the spring and summer of 2008.

In the past, when countries have similarly tried to deal with a financial crises by relaxing monetary conditions, they often exacerbated the problem by fomenting a run on the local currency that increased the foreign-exchange-denominated liabilities of its banks. Bernanke's Fed did not have to worry about this prospect, yet it did need to reckon with the fact that the US dollar is the world's most elemental financial asset.

And once traders and investors around the globe saw that the Fed was deliberately cheapening the intangible value of that paper, they sought protection in more tangible objects, especially oil. As the Euro rose against the greenback, so too did the price of crude oil, both reaching their peaks in July 2008.

Going into the original eruption of the crisis in August 2007, oil was already trading near its historical highs. Unlike previous spikes in the mid-1970s, early '80s, and early '90s, Western economies had withstood the negative impact on firm production and individual fuel costs associated with higher oil prices. Partly, this was because companies had, over the last three decades, become more efficient in the use of energy. Moreover, prices had not yet consolidated above earlier peaks on an inflation-adjusted basis.

However, the price move instigated by Bernanke's devaluation of the US dollar changed the equation, particularly once oil catapulted above US$80 per barrel in early 2008, putting it at an all-time inflation-adjusted high. As it proceeded higher to US$147 per barrel, egged on by a sequence of Fed rate cuts, the American economy finally succumbed.

In the summer of 2008, eye-popping drops began showing up in industrial production, manufacturing durable orders, retail sales, and personal consumption. Auto sales, which had already been suffering under the burden of ascending energy costs, started going into free fall.

Since financial institutions are effectively long the economy through the loan and equity portfolios they hold, the stage was thus set for the resumption of the crisis in the fall of 2008. This time it would be more acute, inasmuch as the financial system had already been weakened by numerous writedowns and the collapse of Bear Stearns in March.

Lehman Brothers, being the weakest of the remaining major investment banks, was the first to lose the confidence of its counterparties, declaring bankruptcy on September 15. When AIG subsequently emerged desperate for funding, and credit markets seized up, Bernanke teamed up with US Treasury Secretary Hank Paulson to petition the US Congress to approve a US$700-billion relief package.

Literally at the moment that Congress said yes to Bernanke on October 3, the stock market dove into the ugliest period of the current bear market. By November 21, the S&P 500 was off 53% of its October 2007 peak, the largest drop of the postwar period.

Though they initially reacted positively to the prospect of the bailout legislation, the markets came to understand its passage to signify that an era of activist government was at hand and all that this implies about unpredictable policy making and anemic growth.

When confronted with the reality that conditions have deteriorated under Bernanke's watch, supporters of the Fed's current policies insist that his prolific printing of money is necessary to stop the economy from spiraling down further. Eventually, it is said, his actions will bear fruit, once the time lag in monetary policy passes.

Yet if we consult the prediction markets on Intrade, which have a good record of forecasting events, we come across a contract being traded based on whether the downturn will extend all the way into 2010. That contract is currently suggesting a worrisome 30% probability of that happening, up from 5% in early November — notwithstanding all that Bernanke has done.

George Bragues is assistant vice-provost and head of the business program at the University of Guelph-Humber in Toronto, Canada.