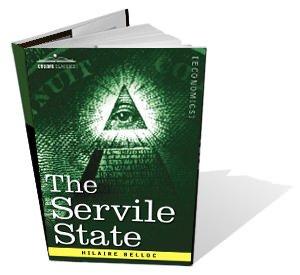 The first appearance under an American imprint of Hillaire Belloc's work, The Servile State, is a curious event. The book was published in 1912. Two world wars, the Russian Revolution and the ruin of Europe have not touched it. To the first American edition Christian Gauss sets an introduction. Thirty years ago, he says, Belloc's indictment of that "evil thing, capitalism," could not disturb American complacency. Now presumably it is different. That is presumably the reason for bringing out an American edition in which not one word has been changed.

Belloc hated capitalism as a "dreadful moral anarchy" that could not endure; if it did not destroy itself it would be destroyed by the moral sense of mankind. A perfect capitalistic state — logically perfect, that is — simply could not exist for long because

there would be no food available for the non-owner save when he was actually engaged in production, and that absurdity would, by quickly ending all human lives save those of the owners, put a term to the arrangement. If you left men completely free under a capitalist system there would be so heavy a mortality from starvation as would dry up the sources of labor in a very short time.

And therefore in order to exist at all,

capitalism must keep alive, by noncapitalist methods, great masses of the population who would otherwise starve to death.

If that had been his main thesis the book might have been adopted by all the anticapitalist intellectuals in the world. What saved it from that fate was the fact that with withering logic he attacked also socialism — collectivism in any form and the entire modern structure of social reform, and reserved the essence of his scorn for the practical reformer. This is one of the very fine passages.

Now, if the socialist who has thought out his case, whether as a mere organizer or as a man hungering and thirsting after justice, is led away from socialism and towards the servile state by the force of modern things in England, how much more easily do you not think the practical man will be conducted towards that same servile state, like any donkey to his grazing ground? To those dull and short-sighted eyes the immediate solution which even the beginnings of the servile state propose are what a declivity is to a piece of brainless matter. The piece of brainless matter rolls down the declivity, and the practical man lollops from capitalism to the servile state with the same inevitable ease.

He knows nothing of a society in which free men were once owners, nor of the cooperative and instinctive institutions for the protection of ownership which such a society spontaneously breeds. He "takes the world as he finds it" — and the consequence is that whereas men of greater capacity may admit with different degrees of reluctance the general principles of the servile state, he, the practical man, positively gloats on every new detail in the building up of that form of society. And the destruction of freedom by inches (though he does not see it to be the destruction of freedom) is the one panacea so obvious that he marvels at the doctrinaires who resist or suspect the process.

What then is his thesis? To make it clear he states it three times, and it is this:

The capitalist state breeds a collectivist theory which in action produces something utterly different from collectivism: to wit, the servile state.

Capitalism, socialism, collectivism — they are all leading man to the servile state, which is defined as a kind of pagan slavery where the few command the labor of the many and the many have security and status without freedom. Capitalism is that state of society in which a wicked few possess the means of production; there is also political freedom, which makes it all the worse because a man who, though politically free, does not possess a "useful amount of the means of production" is a proletarian. If the means of production are transferred to the state peaceably by purchase, as the socialists would do, you come anyhow to the servile state, and if you liquidate the owners and confiscate "the springs of life," as the collectivists would do, by violence, you come to it at once in the totalitarian form.

Is there an alternative? Historically there was. Toward the end of the Middle Ages, after ten Christian centuries, slavery had gone and in place of it had come an "excellent consummation of human society." Property was widely distributed. All industry was organized in the form of guilds, a system partly cooperative but in the main composed of private, self-governing owners of capital. Competition was so limited as to "prevent the growth of one at the expense of another." There were restraints upon freedom, but

If liberty of purchase and of sale, of mortgage and of inheritance was restricted, it was restricted with the social object of preventing the growth of an economic oligarchy which could exploit the rest of the community. The restraints upon liberty were restraints designed for the preservation of liberty.

For this happy condition, the happiest and freest in man's history, there was at the time no name. Belloc provides the name. It was the distributive state. What happened to it? Why did men forsake it? Belloc finds that they didn't forsake it. In the struggle between the state and the church for control of the individual the state won and confiscated the church lands — especially in England, and especially there for purposes of illustration because the modern industrial system began in England and spread from there — and then, having confiscated the church lands, the state gave them to the lords. Thus the means of production passed to the possession of a few evil men, and that was the origin of capitalism. The Industrial Revolution had nothing to do with it. Capitalism had been fastened upon England before that. If the distributive state had not already been destroyed the Industrial Revolution might have been financed by the guilds, pooling their little parcels of wealth, whereas, because by this time capital was in the hands of a few, only the few could find the capital.

Thus, coming as it did in England upon a people who had lost their economic freedom, industrial development took at its very origin a capitalist form, and this form it has retained and perfected through 200 years — instead of the cooperative form it might have had.

This is bad history. What people might have done in place of what they did do is not history at all. It is fantasy. With all industry in the hands of the guilds who limited freedom of competition to protect their own warm little world, it was not likely that they would run small parcels of wealth together as risk capital to finance the Industrial Revolution that was going to destroy them.

Secondly, the statement that "when any one of the new industries was launched it had to be capitalized" is misleading. At the beginning of the Industrial Revolution new industries were not launched, as we think of it today. They grew from strange and hazardous beginnings, generally against the ridicule of all observers. They were not capitalized. The amount of actual money capital that went into them at the beginning was almost nothing, and of what little there was there is no trace left in the world. The original capital was idea, personal privation, despair and disappointment.

The fact is that the Industrial Revolution financed itself, making its capital as it went along. The first automobiles were not capitalized. They were created by tinkers and mechanics, working in the woodshed and sometimes blowing everything up. When their automobiles would run then they borrowed money from their friends or mortgaged the family dwelling to start a factory. No banker would finance them. Now to launch an automobile enterprise might cost half a billion dollars and the bankers would form a syndicate to do it. But that is after it has all happened.

Having proved by logic that capitalism, socialism and collectivism all tend inevitably to bring the servile state to pass, Belloc comes to speak of the solution and there his distributive state fails him. The way back to that state of society in which ownership of "the springs of life" shall be happily universal is a road of appalling difficulties. They are perhaps insurmountable. Suppose you think of doing it boldly, as to say, "all shall own," instead of saying, as the collectivists would, "none shall own." Very good. But by what scale of justice shall this new ownership be apportioned among the people? What will the people do with it? How would you keep the many from selling it back to the few? "Action of this kind," he says

would so disturb the network of economic relations as to bring ruin at once to the body politic.

is divided between the proletarian mass which thinks in terms not of property but of employment, and the few owners who alone are familiar with the machinery of administration.

Moreover, you would be working against the grain of society, whereas the collectivist is working with it.

If capitalism is self-destroying, as he says it is, if socialism leads to the servile state, and if the distributive state as a practical matter is not feasible, then we have but one choice; and that is a choice between serfdom and death.

He cannot believe it himself. At least he cannot rest it there. In the last paragraph he leaves logic in the lurch and says that upon the whole he is hopeful that people will be seized with a kind of faith that will save them from "sinking back into our original paganism — for the tendency to the servile state is nothing less." And this notwithstanding the fact that he is at the same time despondent about people. They have fallen into the proletarian trough. You cannot be sure that they are interested in ownership, really. Nor can you be sure that any tradition of property ownership surviving among them will be strong enough to keep them from squandering their new wealth. You could hardly trust them even to manage it.

Briefly, when Mr. Belloc thinks of a return to his distributive state the figure of the proletarian man rises before him as the chief obstacle; and for this he blames capitalism. It was something capitalism did to deform mind and morals.

And yet this proletarian man may know something that Mr. Belloc seems never to have thought of. Whether he thought of it or not, he doesn't mention it. Modern industrial capitalism, with all the ugliness and cruelty he finds in it, has nevertheless enabled the earth to sustain at least twice as many people as ever lived on it before. If capitalism were not here, neither would the proletarian man be here. He wouldn't have starved; he would never have been born. And if Mr. Belloc's ideal distributive state were re-established — all industry in the hands of guilds, every man owning his own little spring of life — probably half the people now living in the world would perish for want of food, clothes and shelter. Would Mr. Belloc mind?