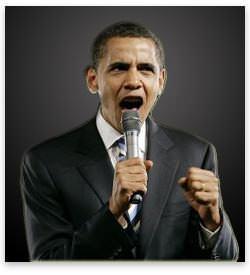 It's raining, pouring, economic fallacies by the hour, followed by a flood of horrible policy that is driving us ever further into economic depression. The regime in charge has really gone nuts, revealing itself as both deeply ignorant and horribly evil.

We find ourselves facing the horror of what has always been the Achilles heel of the left wing: its abysmal ignorance of economic science. The ideological tendency has gone from Keynesianism to outright socialism in a matter of a few weeks.

And the trajectory seems to be accelerated mainly by the logic of the interventionist cycle: bad policy leads to bad results that are addressed through bad policy, and so on, straight down the fast track to serfdom. Obama's attachment to "transparency" — the buzzword of the day — allows all intelligent people to observe the sickening sight in real time, and to the cheers of the kept class of intellectual phonies like Ben Bernanke and Paul Krugman.

The encouraging thing — and perhaps this too was inevitable — is that the right wing is getting its act together. It has suddenly discovered that economics matters. You can cheer on the hot wars, fight the culture wars, and crack down on political dissidents all you want. But in the end, what makes for the good society is a sound economy. Without it, all the rest falls apart.

Thus all our favorite conservatives are starting to make sense. The American Spectator is alarmed. Rush Limbaugh sounds like LRC. The American Conservative has temporarily dropped its love of protectionism to warn of dollar inflation. The love of war has gone AWOL at National Review. The Heritage Foundation is warning that government spending and taxation are driving us to ruin. Pat Buchanan is defending the free market!

Where were these people during the last eight years of Bush's misrule? Asleep or seeking preferment or something. It's not as if Obama caused this crisis; he is only making it worse. In any case, the Right has begun to turn to the side of truth and justice, precisely as they did during Clinton's rule, and this is all to the good, in general.

But just in case we are observing yet another expedient shift, it might be a good idea to understand precisely why socialism is a bad idea. The Obama administration doesn't seem to get it. And there is plenty to get. Socialism crushes human rights, builds the state, impinges on the liberty of conscience, and breeds social, cultural, and economic degeneration.

People have made those points for hundreds of years. Somehow, and for whatever reason, many people rejected these critics. No, they said, all of this sounds plausible, but you don't understand how the sheer glory of the socialist ideal, with perfect equality and social justice, will bring about a new sense of things. Mankind will be inspired to share, create, work, and obey by the astonishing emergence of a completely new form of social organization.

Ludwig von Mises in 1920, however, added something special and new to the critique of socialism. He said that socialism in all its forms cannot accommodate any economic development beyond the hunter-gatherer stage. And the reason has to do with the socialist attack on the ownership and exchange of capital goods. Without ownership, there is no exchange, and so prices do not emerge. Here is his 1920 essay, which says it all.

Without market prices for capital goods, accounting is not possible. You don't know if you are making money or losing money, saving resources or wasting them, doing the right thing or not doing the right thing. Think of all the decisions that have to be made on the production end that require you to know whether you are wasting resources or not. With steel, do you make more buildings or trains? Or do you make cutlery or computers? Or cars or cables?

You can't just rely on assessing consumer demand. The demand for stuff is infinite. What matters are choices in light of foregone alternatives. These can't be discerned with polls or intuition. What matters here is the weighting of all alternative uses of resources. They can only be worked out in real time, in light of the choices of consumers and the profitable production decisions of producers.

None of this is possible if you don't have real market prices providing the real stuff that makes cost accounting possible. Collectivize property and you abolish the market for capital goods. No prices emerge. Every choice you make is arbitrary. There is no more rationality remaining. You just end up groping around in the dark.

No socialist has ever been able to provide an answer to Mises's devastating point. And why? Because no socialist has seriously thought through how their cockamamie system would work. Lenin used to say, oh whatever, just run the whole economy the same way the post office is run. But notice: the post office has a problem with innovation, pricing, cost accounting, and making ends meet. Its only source of life comes from the competition provided by private competitors. The post-officeization of the entire economy would mean a return to barbarism.

Mises's illustration of the failure of socialism provides a fantastic means to discover what is right about markets and wrong about all forms of collectivized economic planning. It shows what happens when you nationalize banks and credit. But it also shows what is wrong with all bureaucracies.

Mises put all his criticism together in a single book, a book that remains the definitive refutation of the entire intellectual apparatus of socialism. It is a classic, a must-read, a treasure for all ages. To read it is to be amazed. It has changed the minds of millions of people since it appeared in 1922. It is the one book that utterly crushes the economic agenda of the Left, revealing what fools they really are.

Mises's point has also been a fruitful one for further theorizing about all forms of collectivism. See, for example, Hans-Hermann Hoppe's Theory of Socialism and Capitalism.

And look: it's not as if socialism is a new idea. It was tried in the 20th century. It produced economic stagnation and despair. In its purest form, it extinguished more than one hundred million people. That's why The Black Book of Communism must be owned and read and understood by every thinking person. It is the most terrifying book you will ever read. It is a standing rebuke to any living soul who claims that economic understanding doesn't matter.

Take this seriously: it is where the Obama tendency is leading us.