GET NEWS AND ARTICLES IN YOUR INBOXPrint
A
A
Home | Mises Library | Barthélemy de Laffemas: The First Major French Mercantilist 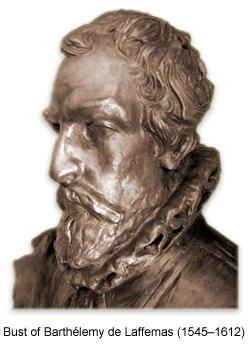 The first French mercantilist of note was Barthélemy de Laffemas (1545–1612), an uneducated son of a very poor Protestant family in Dauphine. All his life he was the servitor of Henry of Navarre, the Protestant pretender, rising in 1582 to the exalted post of honorary tailor and valet to his master. When Henry of Navarre became King Henry IV, Laffemas's fortune was made, and he became in 1601 controller-general of commerce and head of the Commission of Commerce, to remain so until the king's death. Like a devoted dog who dies shortly after his master, Laffemas, now broken in power, died a year after Henry was assassinated in 1610. Laffemas comes to our attention because of the literally dozens of execrably written pamphlets he produced during his decades in power, on behalf of the mercantile system which he was helping to put into place in France.

Laffemas's focal point, his criterion for numerous economic policies, was whether or not they brought bullion into the kingdom. But note that these views need not necessarily be interpreted as dim-witted reliance on money-as-wealth; for when Laffemas wrote that gold and silver were "the sinews and support of kingdoms and monarchies … the true matter and substance which maintains the state against … enemies," he was of course quite right. The more money kings can amass from their subjects, the wealthier and more powerful they would become. There is nothing odd or fallacious about that. The fallacy existed — should the argument be taken seriously — for anyone who identified the king's interest with that of all of French society.

The one spark of economic intelligence here came with the fact that Laffemas was one of the first mercantilists to shrewdly advise the king not to directly prohibit the export of bullion. Far better, he believed, to allow bullion to flow in and out of the country freely, and then strictly regulate commerce and industry in such a way that bullion would flow into the country.

Apart from that, Laffemas's economic advice was a dreary litany: prohibit all manufactured imports; prohibit fairs, which drained money out of the kingdom and into the hands of foreigners; force merchants to buy only raw materials abroad and not manufactures; prohibit the export of raw materials. Guilds must be revived and used to regulate all urban work and to keep up the quality of products; committees of masters should supervise guilds; a bureau of manufactures should supervise them, and so on up to the royal court.

Promoting the usual mercantilist cant, Laffemas assured agriculture that it would benefit, not suffer, from the establishment of protected manufactures, since these would supply a home market for farm products. That this would be a highly inefficient and costly home market Laffemas did not bother to add.

Everyone who opposed his views, according to Laffemas, was selfish, ignorant, and/or a traitor, and should be dealt with accordingly. All who disobeyed the regulations and prohibitions should suffer confiscation of their goods as well as death.

"Everyone who opposed his views, according to Laffemas, was selfish, ignorant, and/or a traitor, and should be dealt with accordingly. All who disobeyed the regulations and prohibitions should suffer confiscation of their goods as well as death."

Like most of his mercantilist confrères, Barthélemy de Laffemas was enamored of the idea of full employment and the eradication of idleness. Full employment, of course, meant coerced employment, and Laffemas called for an end to idleness by putting the idle to work, the reluctant to be forced into it by "chains and prisons." Taverns and cabarets were to be severely restricted, and confirmed drunkards arrested and put into the pillory.

Protectionism begins by trying to ensure national self-sufficiency in goods that can be made at home, and then continues by expanding the definition of what can indeed be made. For when profitability on the market is abandoned as a criterion, virtually every good in creation can be made — at some cost — at home. If Americans wanted to, they could undoubtedly grow all their bananas in hothouses in Maine or Montana at astronomical cost. But what would be the point, apart from subsidies to a few privileged hothouse growers?

One of Barthélemy de Laffemas's daftest projects, which as controller-general he did his best to put into effect, was to make France self-sufficient in one of her favorite luxury imports: silks. Many of his pamphlets and practical efforts were devoted to force-feeding an enormous expansion of the French silk industry, hitherto small and confined to the south of France.

Laffemas insisted that the climate of France was ideal for raising silkworms; any belief to the contrary, any subversive talk that France was largely too cold and stormy for silk growing, was merely propaganda spread by the "evil designs of certain French merchants, retailers of foreign silks." Laffemas pointed to his own successful silk growing, to King Henry's planting of mulberry trees (on which silkworms were fed). He advocated a law compelling all property owners, including the clergy and monasteries, to plant two or three mulberry trees per acre. He painted a beautiful picture of vast profits that were sure to flow from mulberry trees and silk culture. Laffemas also claimed magical medicinal properties for mulberries: they would cure toothache and stomach trouble, relieve burns, chase away vermin, and be an antidote to poisons.

Even though Laffemas persuaded the king to pour hundreds of thousands of livres into fostering the growth of mulberry trees and silk culture, and the king duly ordered each diocese in France to establish a nursery of 50,000 mulberries, the great silk experiment proved an abject failure. The climate of most of France indeed proved inhospitable, a product of hard reality rather than misinformation spread by selfish and traitorous importers. The mass of the French clergy understandably dragged their feet at suddenly being forced to become silk producers. France continued to be a heavy net importer of silks.

Laffemas's main if not only disciple was his son Isaac. At the tender age of 19, young Isaac de Laffemas (1587–1657), keen to become the heir of his powerful father in every sense, published a History of Commerce in France (1606). The History was scarcely a memorable work, distinguished mainly for the fawning praise which he lavished upon his father and on King Henry, and on the slavish repetition of his father's pet notions and nostrums. The tone of this work may be gauged from the fact that Isaac lauded Henry IV as the source of all that is good in France. Addressing His Majesty, young Isaac wrote that heaven "has favored my father in having let him live during your reign."

With the fall of his father from grace and his subsequent death, Isaac's career as a political economist came to an untimely end, and he ended his days as a minor but faithful lieutenant of the chief minister, Cardinal Richelieu.