Banking and the Business Cycle 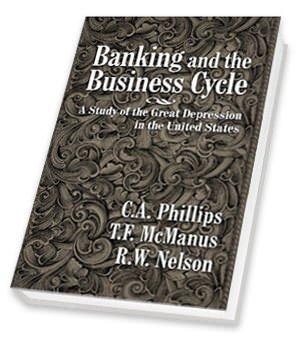 08/28/2009Robert Higgs
I recently read a book titled Banking and the Business Cycle: A Study of the Great Depression in the United States, by C.A. Phillips, T.F. McManus, and R.W. Nelson. It was originally published by Macmillan in March 1937, later became a hard-to-find, almost-forgotten book, and in 2007 was reissued by the Mises Institute in an inexpensive paperback edition.

No one ever assigned or recommended this book to me when I was a student. Indeed, no one ever mentioned it. Only a few years ago did I become aware of it, when I encountered favorable mentions of it by economists whose views I greatly respect. Several years ago, Larry White kindly photocopied the book and sent me a copy, but until recently, I had read only a few parts of it.

Now, having read it from cover to cover, I am willing to say that I know of no better book on the economic dynamics of the 1920s boom and early 1930s bust in the United States. I know about several other excellent books that every student of economics and economic history should read on the same topics, but if I could recommend only a single book to an aspiring economist, or even to an interested lay reader, this is the one I would recommend.

It is tempting to characterize its theoretical framework as Austrian, as indeed it is in many respects (Mises and Hayek are cited favorably, along with many other sound economists, many of them now forgotten), yet Phillips, McManus, and Nelson's framework is broader and more eclectic than a strictly Austrian analysis would be. Moreover, besides being packed with excellent economic analysis in a great variety of applications, the book contains a wealth of quantitative evidence, which the authors handle with admirable caution and good sense. They present many tables and charts, but not a single equation. For modern mainstream economists, who can scarcely move a muscle without writing a raft of equations, this book stands as a brilliant reproach.

To give you a taste of these authors' views and to whet your appetite for reading their book, I present here a few passages, drawn from various sections in more or less random fashion.

An investment deflation, or a deflation of capital values and capital assets, is a much more prolonged process than a commodity, or commercial credit, deflation. (p. 161)

The execution of the [Federal Reserve] Board's control operations [in the 1920s] involved inflationistic action if stabilization of the price level was to be achieved, in the sense that it artificially maintained that level and forestalled the inevitable and natural decline which otherwise would have accompanied the post-War expansion of production, and hence explains the bank credit inflation which resulted. (p. 184)

There is nothing inherently bad in a falling price level (in fact, there is much to commend it…), provided the rate of decline is gradual. (p. 186)

If all prices [including asset prices] are considered, then, it is clear that an inflationary price rise actually did occur in the period following 1922, despite the fact that wholesale commodity prices were relatively stable. (p. 191)

The shrinking of business failures to a minimum at the same time that prices are rising is usually a storm signal for the economic system in the not-so-distant future. And the government is almost always, in the subsequent depression, importuned to "take care of" those rash adventurers who (with more credit than sense at their disposal) rushed into those industries where soberer business judgment indicated the treading was not good. (p. 207)

Commenting on the government's measures to reverse or moderate the depression:

Foolhardy procedures which are divorced from economic realities, or whose economic implications are not understood by their promoters, do not perforce become sanctified and wise merely by designating them as "action"; tilting at windmills does not draw water. (p. 212)

[W]e must save our way out of depression, we must increase the real savings that make the creation of real capital possible, instead of spending our way to recovery by cumulating governmental deficits which concentrate attention on consumption as has now been done for five years. (p. 218)

"This remarkable book deserved a far, far better fate than to have faded into near oblivion."

There is no quarrel [by the authors] regarding the desirability of higher prices for some classes of goods, but there is disagreement with the view which holds that monetary and credit manipulation alone will suffice to cure the unbalances left over from the depression. (p. 241)

[C]onditions in the investment market are still [early in 1937] such that extensive long-term investment is not being made. (p. 242)

This remarkable book deserved a far, far better fate than to have faded into near oblivion. Indeed, if it, rather than Keynes's General Theory, had been the point of departure for subsequent study of macroeconomic fluctuations, the world almost certainly would have been a much, much happier place.

This review originally appeared on Independent.org.