The Attack on Accidental Americans 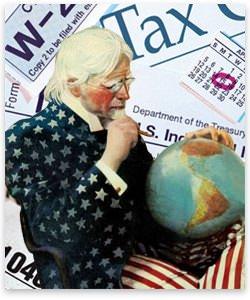 When Julie Veilleux discovered she was American, she went to the nearest US embassy to renounce her citizenship. Having lived in Canada since she was a young child, the 48-year-old had no idea she carried the burden of dual citizenship. But the renunciation will not clear away the past ten years of penalties with the Internal Revenue Service (IRS).1

Born to American parents living in Canada, Kerry Knoll's two teenaged daughters had no clue they became dual citizens at birth. (An American parent confers such status on Canadian-born children.2) Now the IRS wants to grab at money they earned in Canada from summer jobs; the girls had hoped to use their RESPs (registered education savings plans) for college.3

The IRS is making a worldwide push to squeeze money from Americans living abroad and from anyone who holds dual citizenship, whether they know it or not. It doesn't matter if the "duals" want US status, have never set foot on US soil, or never conducted business with an American. It doesn't matter if those targeted owe a single cent to the IRS. Unlike almost every other nation in the world, the United States requires citizens living abroad to file tax forms on the money they do not owe as well as to report foreign bank accounts or holdings such as stocks or RSSPs. The possible penalty for not reporting is $10,000 per "disclosed asset" per year.

Thus, Americans and dual citizens living in Canada (or elsewhere) who do not disclose their local checking account — now labeled by the IRS as "an illegal offshore account" — are liable for fines that stretch back ten years and might amount to $100,000. A family, like the Knolls, in which there are two American parents and two dual-citizen children, might be collectively liable for $400,000.

Approximately 7 million Americans live abroad. According to the IRS, they received upwards of 400,000 tax returns from expatriates last year — a compliance rate of approximately 6 percent. Presumably the compliance of dual-citizen children is far lower. Customs and Immigration is now sharing information with the IRS and, should any of 94 percent expats or their accidentally American offspring set foot on US soil, they are vulnerable to arrest.

So far, the IRS push into foreign territory has been a rousing success by their own standards. In 2009, the IRS offered "amnesty" — that is, lessened but still hefty penalties — to whoever stepped forward to disclose foreign bank accounts. According to FOX Business News, the 2009 program netted

the government $2.2 billion in tax revenues … and $500 million in interest from the 2011 program, for a total of $2.7 billion.… Moreover, the IRS says it has yet to reap penalties from these evaders, which could rake in hundreds of millions more.

we are in the middle of an unprecedented period for our global international tax enforcement efforts. We have pierced international bank secrecy laws, and we are making a serious dent in offshore tax evasion.4

Going after the college money earned by children born and raised in Canada (or elsewhere) is just one part of the international enforcement effort. The entire package is called the Foreign Account Tax Compliance Act or FATCA; it was a revenue-raising provision that was slipped into one of Obama's disastrous stimulus bills. Starting in 2013 — or 2014 if an exemption is granted — every bank in the world will be required to report to the IRS all accounts held by current and former US citizens. If account holders refuse to provide verification of their non-US citizenship, the banks will be required to impose a 30 percent tax of all payments or transfers to the account on behalf of the IRS. Banks that do not comply will "face withholding on U.S.-source interest and dividends, gross proceeds from the disposition of U.S. securities, and pass-through payments."5

Australia and Japan have already declared their refusal to comply. Canada's Finance Minister Jim Flaherty has publicly stated that the proposed American legislation "has far-reaching extraterritorial implications. It would turn Canadian banks into extensions of the IRS and would raise significant privacy concerns for Canadians."6

Toronto-Dominion Bank is putting up a fight against a new U.S. regulation that would compel foreign banks to sort through billions of dollars of deposits to find U.S. citizens who might be hiding money.… TD has complained that the proposed IRS rule is unreasonable because it would require the bank to make US$100-million investment in new software and staff. Other lenders resisting the effort include Allianz SE of Germany, Aegon NV of the Netherlands and Commonwealth Bank of Australia.… Now the Canadian Bankers association has joined the fray. In an emailed statement the CBA called the requirement "highly complex" and "very difficult and costly for Canadian banks to comply with."7

[O]ne of Asia's largest financial groups is quietly mulling a potentially explosive question: could it organise some of its subsidiaries so that they could stop handling all US Treasury bonds? Their motive has nothing to do with the outlook for the dollar.… Instead, what is worrying this particular Asian financial group is tax. In January 2013, the US will implement a new law called the Foreign Account Tax Compliance Act.… [T]he new rules leave some financial officials fuming in places such as Australia, Canada, Germany, Hong Kong and Singapore.… [I]mplementing these measures is likely to be costly; in jurisdictions such as Singapore or Hong Kong, the IRS rules appear to contravene local privacy laws.… Hence the fact that some non-US asset managers and banking groups are debating whether they could simply ignore Fatca by creating subsidiaries that never touch US assets at all. "This is complete madness for the US — America needs global investors to buy its bonds," fumes one bank manager. "But not holding US assets might turn out to be the easiest thing for us to do."8

US banks will be desperately trying to cover their liability by checking the exact purpose of the payment, to make sure it doesn't come within the scope of the legislation. The burden of proof will naturally pass to the account holder who is trying to transfer money, to demonstrate that the transaction is not subject to the new withholding tax. If the sending bank in the USA has any doubt at all about the purpose of the transaction, they will be forced to deduct 30 percent tax. Net result? It is going to be darned difficult for anyone to transfer money out of the USA. If that isn't a form of currency control, then I don't know what is! (emphasis original)

Returning to the Little Guy and Gal

Expat Americans and children — a.k.a. dual citizens — will be caught in the indiscriminate steel net that the IRS wants to throw around the globe. Their innocence or ignorance will not matter. The IRS wants money. If expats and duals do not owe money from their earnings, then the IRS will pursue obscure reporting requirements and apply them to people who did not even know they were American. It will try to yank their college funds and drain their parents' retirement savings.

They can renounce their American citizenship but that is an imperfect solution. For one thing, it does not immunize them from the past ten years of nonreporting. For another, following the United States' "exit" sign takes many people directly through the Treasury Department where they may be required to pay a brutal one-time exit tax. Basically, for those with more than $2 million dollars in assets, the tax comes to $600,000.

Moreover, renunciation is a difficult process. The Globe and Mail is one of many Canadian newspapers now explaining to readers how they can renounce American citizenship. G&M states,

Renouncing your U.S. citizenship starts with a hefty fee — $450 (U.S.), just for the chance to appear in front of a consular official. Need it done in a hurry? Forget about it. It can take about two years to get an appointment.9

The true hope lies in a worldwide refusal to comply. The only power strong enough to rein in the United States is the world itself. There is hope that this will happen. Reuters declared,

A U.S. law meant to snuff out billions of dollars in offshore tax evasion has drawn the criticism of the world's banks and business people, who dismiss it as imperialist and "the neutron bomb of the global financial system." … A senior American finance executive at the Hong Kong branch of a major investment house [declared] that FATCA was "America's most imperialist act since it invaded the Philippine Islands in 1899." The regulation … was "engendering a profound and growing anti-American sentiment abroad."10

How long can America maintain that people "hate us for our freedom?" People fear and hate America for its totalitarianism. And among those people filled with fear are American citizens.