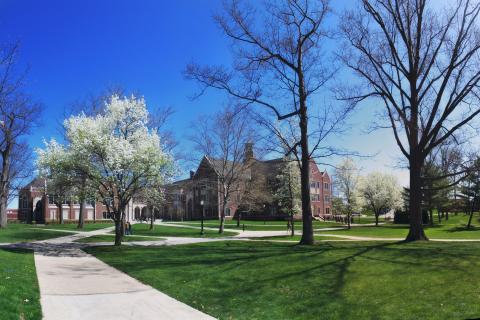 In late 1977, the College refused to sign an Assurance of Compliance form, required by the federal government in the wake of the passage of Title IX of the Civil Rights Act. Even then, the College accepted no direct federal aid. Some Grove City students did receive Basic Educational Opportunity Grants (now Pell grants) and Guaranteed Student Loans. So the government said the College was in fact receiving federal financial support. The result was that in 1977 the Department of Education sued the College to force it to sign the compliance agreement.

The case went all the way to the U.S. Supreme Court. The case was not about discrimination by the College. Justice Powell wrote in his concurring opinion: "Grove City does not discriminate - and so far as the record in this case shows - never has discriminated against anyone on account of sex, race or national origin."

The Supreme Court decision, Grove City College v. T. H. Bell, Secretary of the U.S. Department of Education, held that the student grants did constitute indirect aid to the College, and that this opened the College to regulation under the provisions of the Higher Education Act. Rather than accept such regulation, the College decided that it would no longer admit students with federal grants. ln order to continue to provide the needed student aid, it substituted scholarships financed with private funds.

Since the Court had not said that its ruling extended to federally guaranteed student loans, the College continued to accept payments of tuition and fees that were financed with these loans-the Stafford and PLUS programs. Then in June 1996, the federal Department of Education suddenly changed its stance on participation in the loan programs. Now it insisted that the College sign an agreement that would subject it to regulation under all of the subsections of the law that pertain to financial aid, including those governing programs in which it did not participate, such as the Pell grant program. This would have opened the College up to the entire vast range of federal regulation under the federal financial aid statutes.

According to one careful estimate, there are more than 7,000 separate items - regulations and the frequent modifications issued by the Department - to keep track of. In view of the sheer number and complexity of the regulations, the College could never be entirely sure that it was in compliance. Most important of all, there is no way to be sure that the government would not add regulations that would strike at the heart of the College's mission. As a private, Christian college, GCC had a legitimate concern about federal interference in what was taught and how it was taught. This was the most compelling reason for deciding to withdraw from the loan programs.

As in 1984, after withdrawing, Grove City had to be able to offer its students something to substitute for the federal program. Since nearly 800 students were then borrowing through these programs, the College had to provide for their future needs and had to enable incoming students to finance their education. Grove City College was able to arrange with a private bank to create a completely private loan program for GCC students that is fully competitive with the federal loan program. Now the College is entirely free of federal funding.

Grove City College has no federal scholarships, no federally guaranteed loans, no federal work-study funds, no federal research grants or contracts, not even students paying for their education with veterans' benefits. The College did not withdraw from these programs out of caprice, just for the sake of independence, or because of the costs of compliance (although they can be steep). Grove City College broke away from Uncle Sam because it wanted to be free to pursue its mission as it saw fit.

Excerpted from a March 6, 1998 speech delivered by Dr. Moore in Canton, Ohio