GET NEWS AND ARTICLES IN YOUR INBOXPrint
A
A
Home | Mises Library | Ac-cent-tchu-ate the Positive: The New Accounting at the Fed

Ac-cent-tchu-ate the Positive: The New Accounting at the Fed 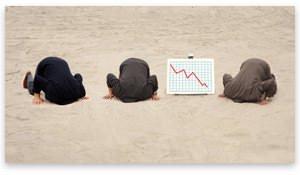 Back in early January, the Federal Reserve made an obscure announcement in its weekly report. It appeared to be an inconsequential accounting change in the treatment of earnings, and was sold as a step toward greater transparency.

The change was buried in such jargon that it took weeks for the financial bloggers to fully digest what had happened — the new move made it effectively impossible for the Fed to go bankrupt! In this article I'll explain the rule change and speculate on the Fed's motives.

You Call This Transparency?

On January 6, in the opening of its weekly H.4.1 release — which details changes to the Fed's holdings from the prior week — the Fed announced the following:

If the reader had the stamina to go through the entire statement above, he or she can understand why nobody thought much of it, at the time of the release. The Fed seemed to be saying that the rule change was no big deal, was perfectly consistent with the treatment given to other items, and that, if anything, it was a move promoting greater transparency of the Fed's operations.

It was not until later in the month that skeptical financial bloggers realized the implications of the rule change: the Fed was now impervious to bankruptcy, as a matter of accounting.

Bernanke Wanted to Focus on the Positive …

Here's a summary of the new situation from an investment website:

Here is how Bank of America's Priya Misra explains this curious, and most certainly politically-motivated development: "The Fed remits most of its net earnings on a weekly basis. Prior to this accounting change, any unremitted earnings due to the Treasury would accrue in the 'Other capital' account, but will now be shown in a separate liability line item called 'Interest on Federal Reserve notes due to the Treasury.' As a result, any future losses the Fed may incur will now show up as a negative liability (negative interest due to Treasury) as opposed to a reduction in Fed capital, thereby making a negative capital situation technically impossible regardless of the size of the Fed's balance sheet or how the FOMC chooses to tighten policy." (emphasis in original)

Well now, that's rather a different flavor from the Fed's original statement, isn't it? To see how the two are consistent, let's look again at the critical passages from the Fed's announcement:

The trick is that the Fed led the reader to assume that "the balance in its surplus account" would be positive. In other words, the Fed was dealing with the standard case where its assets grow over time (because of interest earnings on its bonds, etc.). That would lead the left-hand side of the balance sheet (i.e., the "Assets") to grow, and so something on the right-hand side of the balance sheet (i.e., "Liabilities and Capital") would need to grow by the same amount.

Prior to the announcement, the immediate move would be to mark up an increase on the "Assets" side with a corresponding credit to the "Capital" (or "Shareholder Equity") items on the right-hand side. But now, the Fed is saying that when its assets appreciate, it won't credit the capital accounts. Instead, it will make the right-hand side of the balance sheet go up by entering a new liability, titled (paraphrasing) "Earnings We Need to Send to the Treasury."

(To understand the big picture, keep in mind that after the Fed pays its bills, any excess earnings are remitted to the Treasury. As I argued in this piece, that mechanism means that Uncle Sam effectively pays no interest on those bonds held by the Federal Reserve.)

So far, so good. It seems as if the Fed is simply eliminating one of the steps in the accounting. Before, the Fed would earn income on its assets, would then recognize that jump in its holdings by marking up its capital, and then would transfer some of that increment in capital over to the Treasury.

But now — so one would think, from reading the Fed announcement — the Fed is just directly relating asset increases into payments that it owes the Treasury. So those earnings don't "flow through" the capital portion of the balance sheet (on the right-hand side) anymore. No big deal, right?

Denial Is Normal after a Traumatic Loss

Ah, but as Bank of America's Misra pointed out, the real fun happens when the Fed suffers losses on its assets. In normal accounting, when the market value of a company's assets goes down, the firm marks down its "Assets" (left-hand side of the balance sheet) and correspondingly marks down its "Capital" by the same amount (right-hand side of the balance sheet).

The danger is that if a firm loses too much, then it might wipe out all of its capital. At that point, the firm would be insolvent, because its remaining "Assets" would be smaller than its "Liabilities." Remember the basic accounting truism:

If the company suffers such large losses that its "Capital" (or "Equity") becomes negative, that is simply another way of saying that the company owes people more money (i.e., its liabilities) than it has in assets. That is the definition of insolvency, and unless the situation is rectified the firm will eventually default on its obligations and go bankrupt.

Fortunately, from the Fed's viewpoint, this tragic outcome is no longer possible for the US central bank. No matter how big the hit to its assets, the Fed will never be insolvent from an accounting standpoint. Even if the Fed's bond portfolio lost $1 trillion in an afternoon, the Fed would be fine: It would mark down its "Assets" by $1 trillion, and under its "Liabilities" it would list "negative $1 trillion owed to the Treasury." Thus the left- and right-hand sides of the balance sheet would still balance, and "Assets" would still exceed "Liabilities."

Over time, if the Fed continued to earn interest income from its holdings, the Treasury would "work off" its debt to the Fed. For example, if the Fed's excess earnings — which would normally be remitted as a payment to the Treasury — were $10 billion in the next quarter, then the Fed's books would show that its liability to the Treasury had increased to "negative $990 billion." (Note that when negative numbers get bigger, they move toward zero.)

Nothing Can Stop the Ben Bernank

When QE2 was the hot item, analysts were openly wondering whether the Fed could become insolvent. After all, "the Bernank" was loading up its balance sheet with bonds at a time when interest rates were at historic lows. If and when interest rates were to spike, the bonds held by the Fed would suffer a large decrease in market value. In principle, if the spike were high enough, the Fed could wipe out all its capital and become insolvent.

Or at least, the Fed could have done so before the January rule change. As I wrote in November, there is no technical hindrance to Bernanke's money-printing operation, even from insolvency. The Fed's "liabilities" consist in Federal Reserve Notes (and bank reserves, which are legally equivalent). If a person gives Bernanke a $100 bill, he "owes" them five $20 bills, or ten $10 bills, etc.

Even so, before the January rule change, it would have been very awkward for the Fed to become insolvent. The financial community would have seen just how nihilistic fiat-money central banking really is.

But never fear, that awkward possibility has been eliminated. It is now mathematically impossible for the Fed to become insolvent, through the magic of "negative liabilities." There is nothing to hinder Bernanke's inflationary spree now, except public backlash against rising prices.

The Fed's rule change, couched in obscure language, is very ominous. It suggests that Fed officials know just how vulnerable they are, and that large interest rate hikes may be much closer than they have led us to believe.