GET NEWS AND ARTICLES IN YOUR INBOXPrint
A
A
Home | Wire | When it Comes to Household Income, Sweden and Germany Rank with Kentucky

When it Comes to Household Income, Sweden and Germany Rank with Kentucky

Last year, I posted an article titled "If Sweden and Germany Became US States, They Would be Among the Poorest States" which, produced a sizable and heated debate, including that found in the comments below this article at The Washington Post. The reason for the controversy, of course, is that it has nearly reached the point of dogma with many leftists that European countries enjoy higher standards of living thanks to more government regulation and more social benefits. What the data really suggests, however, is that even after social benefits are incorporated into the income data, the median American still has a higher income than most European countries.

Since I published that analysis last October, the Organization for Economic Co-operation and Development (OECD) based in Paris has updated the numbers. Here is the ranking straight fom the latest "Society at a Glance" report from the OECD:

The comparisons were based on a measure of income known as "annual median equivalized disposable household income." The measure attempts to take into account the realities of taxes and social benefits, and thus provide a more practical estimate for differences in household income among countries. The data is also adjusted for purchasing power parity, which means it's taking differences in purchasing power in different countries into account. Moreover, median income is more helpful when there may be large income inequalities at work. Use of a median measure instead of an average reduces the effect of a small number of extremely rich people skewing up the numbers.

In the updated measure, we can see that the United States is in fourth place behind Luxembourg, Norway, and Switzerland. The US comes in at $29,100, while Luxembourg's median income level is at 36,400.

These comparisons are only at the national level, of course, and one of the largest problems with comparing the US to other countries, is that the US is much larger than every European country. This is true even of Russia, which has less than half as many people as the US.

Many countries — especially the smaller ones, including all the Scandinavian countries — are composed of only a handful of metropolitan areas, often with fewer than ten million people. The US, by contrast is very large, and very diverse in terms of geography and demographics. The US has more than 320 million people. Consequently, any statistic for the "United States" ends up burying within it the often-sizable differences from state to state and from metro area to metro area.

For example, if we adjust state incomes to match up with our disposable income measure, we find there can be notable differences from state to state. While it's true that the wealth and income differences have become much smaller since the 1940s, gaps remain: 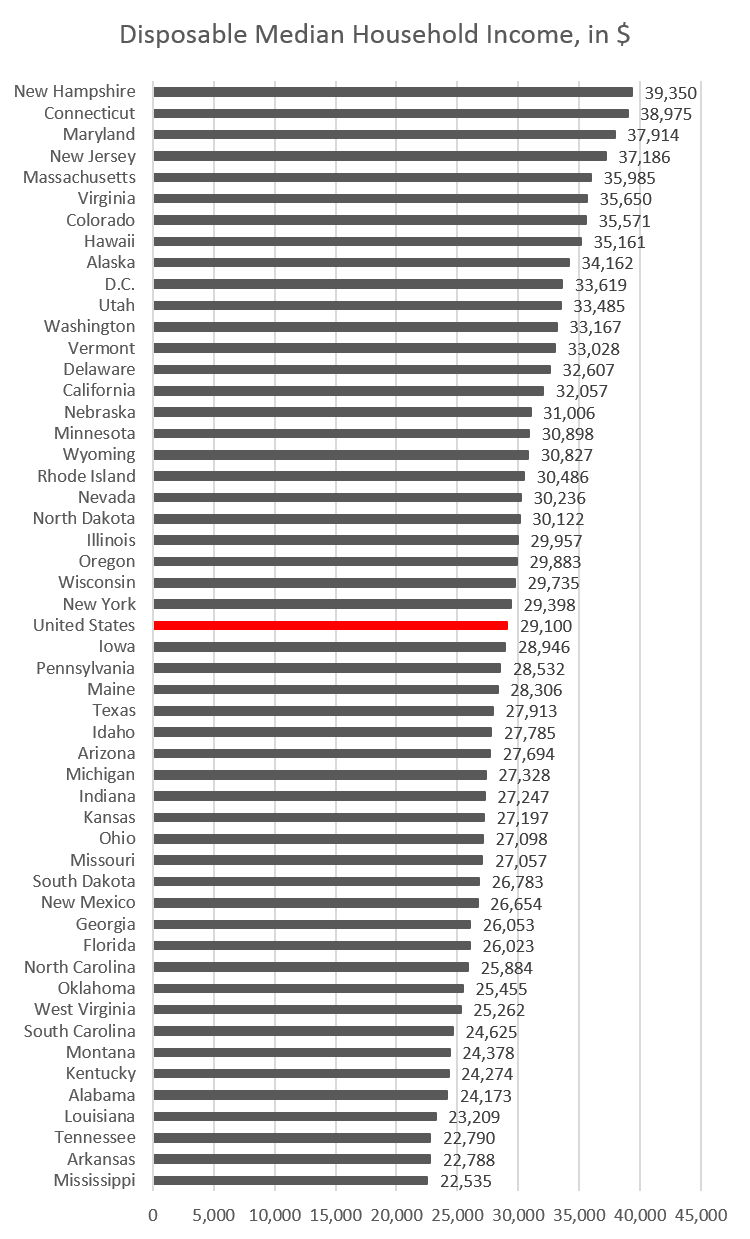 To incorporate individual sttes into the analyis,  I have looked at how the Census Bureau's median income for each state stacks up against the US median income overall. I've then adjusted the OECD measure to be proportional to that.1

While it is a rather crude means of adjusting the data, can see that the result is plausible. A wide variety of other measures of state-level wealth routinely put Massachusetts — for example — above national levels, while measures of Arkansas put it below national levels.

The next step, then, is to compare these values to the OECD's values for each country. Obviously, any country with a disposable income measure above that of the US overall will find itself with an income level above most US states. At the same time, a country with a disposable income measure below that of the US overall is likely to find itself ranked below many US states.

When we graph them all together we find: 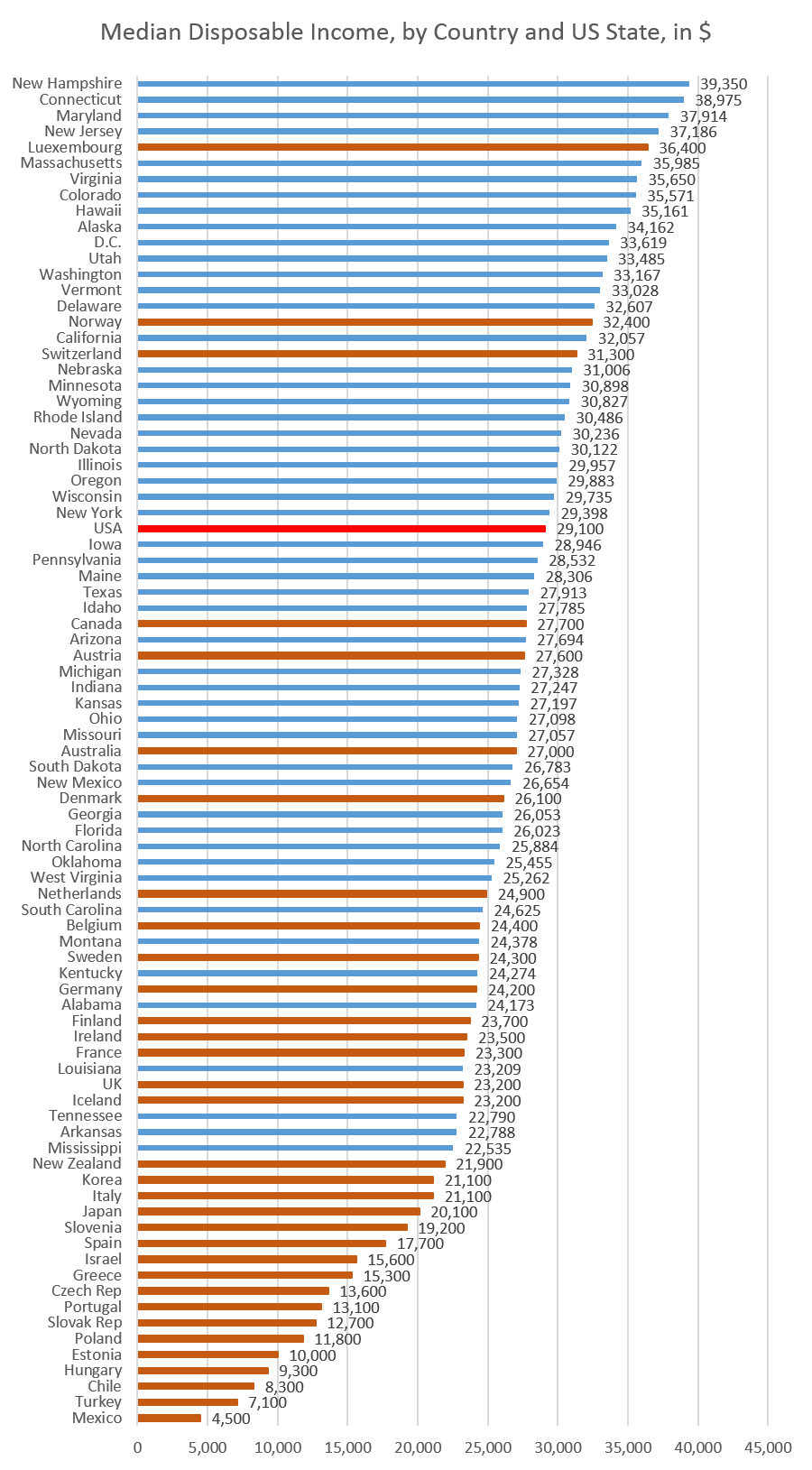 The US overall is the red bar and all US states are blue bars. This provides us with a sense of how foreign countries would compare were these places part of the US. Were Norway a US state, it would rank between Delaware and California, which are among the US's more urbanized and wealthy states. Sweden and Germany, on the other hand, place closely to Kentucky, which is sixth from the bottom for US states in terms of median income.

Last year, similar analysis showed that Sweden ranked 12th from the bottom. The analysis used in that article was somewhat more complicated in which I attempted to adjust the cost of living, in very cheap-to-live states like Arkansas, to account for the fact that these places were far less expensive than most areas of Western Europe. Theoretically, that should have increased the real median incomes in cheaper states.  This time, I have opted for a simpler analysis with no adjustment for cost of living, and have taken the OECD median income numbers straight from their publications without any of my own adjustments for purchasing power parity.

Nevertheless, the slight change in method produced no large changes in the result. Sweden and Germany do rank lower this time around, although the overall result is simply that most European countries — aside from the wealthiest small countries like Switzerland and Norway — fall within the bottom third of the United States. When making comparisons, however, it is best to not read too much into difference of a mere few hundred dollars. For example, all states and countries in the $24,000 range (i.e., Belgium, Sweden, Montana, South Carolina) should all simply be regarded as more-or-less alike. The difference between Colorado and Canada, on the other hand, is a sizable gap of more than $7,000.

As with the last time I published this analysis, there is no doubt that many defenders of the European interventionist states will protest that income is not the only measure of the standard of living. This is true enough. Income data cannot capture the realities of comparing living standards all by themselves. Income measures, are, however, certainly more objective than many living-standard measures such as feelings of happiness or well being, which are often put forward as important for making comparisons between countries.

Certainly, one of the more important measures to be considered in light of income data is the household wealth data. By this measure, we do indeed find that many countries report higher household wealth than the US. I discuss many of the details here in "Why Do Americans Have Such High Incomes and So Little Savings?" However, even in that case, household wealth in the US comparable to that found in Germany, Denmark, and Spain. In other words, those countries are characterized by both income levels and wealth levels that fall below that found in the US overall.

While there are indeed many quality-of-life aspects that make the Western European welfare states attractive, this analysis shows that it cannot be said that it is self-evident that the standard of living throughout Western Europe is higher thanks to the region's presumably lavish welfare states.