The US Median Income Is Falling

Last weekend, John Crudele at the New York Post noticed, in an article titled "Americans haven’t gotten a raise in 16 years"  that in spite of the current administration's many claims of economic prosperity, the voters don't seem particularly pleased:

One of those pundits made me chuckle Tuesday night when he was talking about Trump’s primaries victories in another five states. He suggested that Americans were somehow being brainwashed by the media into thinking the economy was really bad when in fact it was good.

Then, on Thursday, the Commerce Department showed just how good the economy wasn’t. It announced that the Gross Domestic Product grew by an annual rate of just 0.5% in the first three months of 2016.

But that didn’t stop the media from trying to explain away the disappointment.

Here's a graph of GDP growth mentioned, by the way (hint: growth is weak): 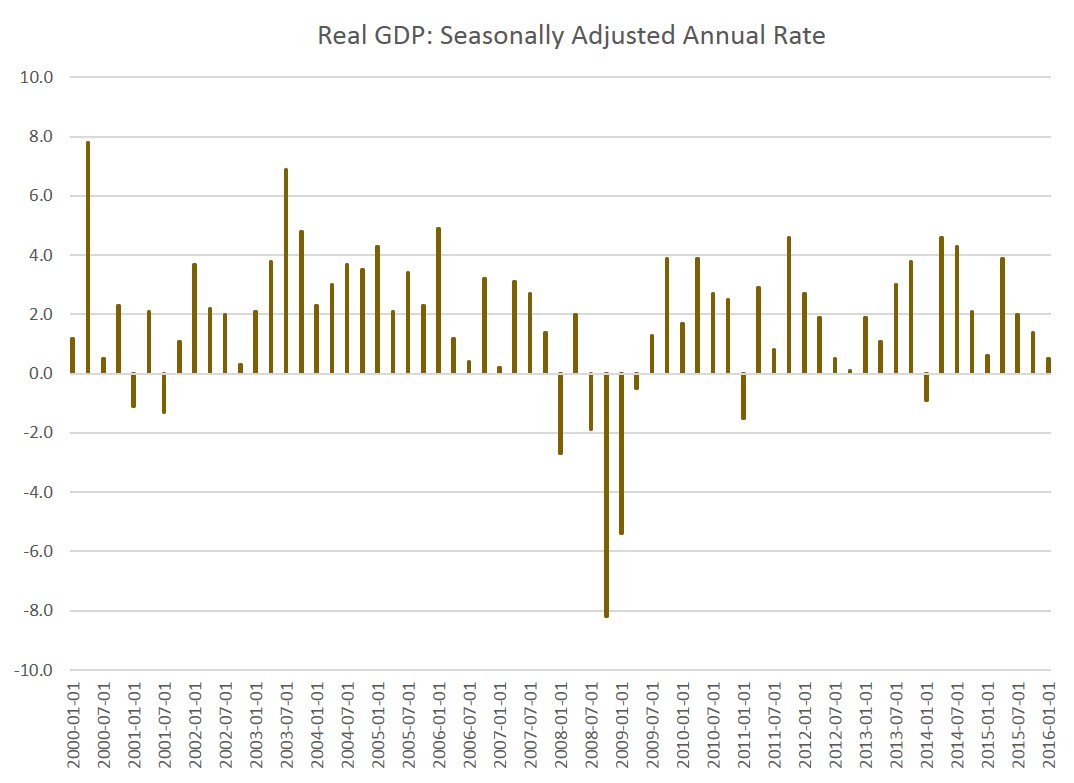 This "accentuate the positive" attitude isn't all due to alleged partisan bias on the part of the news media. The media really does think the economy is doing quite well. First of all, it's unlikely that the seven-figures-earning national media stars have any idea of what life is like for normal wage earners out there, but it's also just a function of the extremely limited skill sets of most journalists. Outside of a small core of die-hard business reporters, journalists are incapable of examining statistical information in a way that requires one to look beyond the headline and the first paragraph of the federal government's official press release.

When dealing with government statistics, of course, we should generally approach them with skepticism, and we should also eschew seasonal adjustments in favor of old-fashioned year-over-year comparisons.

But, as we explored earlier, the oft-repeated claim that "millions of jobs" have been created in recent years turns out to be really a matter of 0.8 percent growth in full-time jobs. By this measure, we're barely back to where we were before the last recession:

See here for more on this.

Crudele brought this up too:

When you count all the workers who have been stuck with part-time employment or who haven’t searched for work in a year, the jobless rate is twice the official 5% level. And many of the full-time jobs created have been in the lower-paying service sector of the economy.

So, yes, there are reasons for voters to be grumpy. Moreover, Crudele noted that household income hasn't actually increased at all since 2000:

One last statistic, from Sentier Research. Median annual household income in the US reached $57,263 this past March, which was 4.5% higher than in March 2015.

But — and here’s where the anger comes in — this March’s figure is still slightly below the $57,342 median annual income in January 2000.

Americans haven’t gotten a raise in more than 16 years.

Crudele uses data from a private research firm, but we can get similar numbers by using the fed's own data as well.

For example, median household income, as reported in the Census Bureau's Annual Social and Economic Supplement, shows a decline from 2000 to 2014: 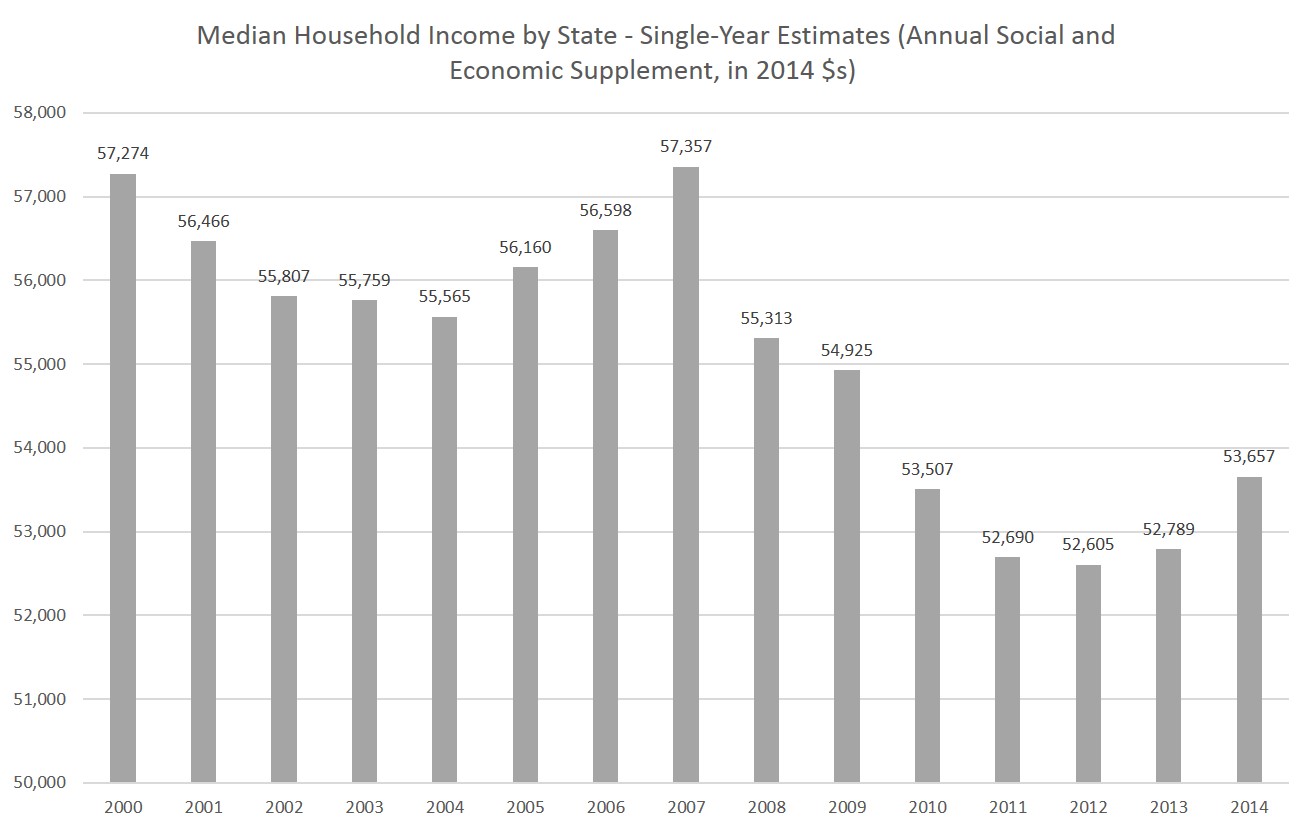 Similarly, in a separate measure of median family income (there's a technical difference between a household and a family) we also find a decline from 2000 to 2014 (see Table F-8): 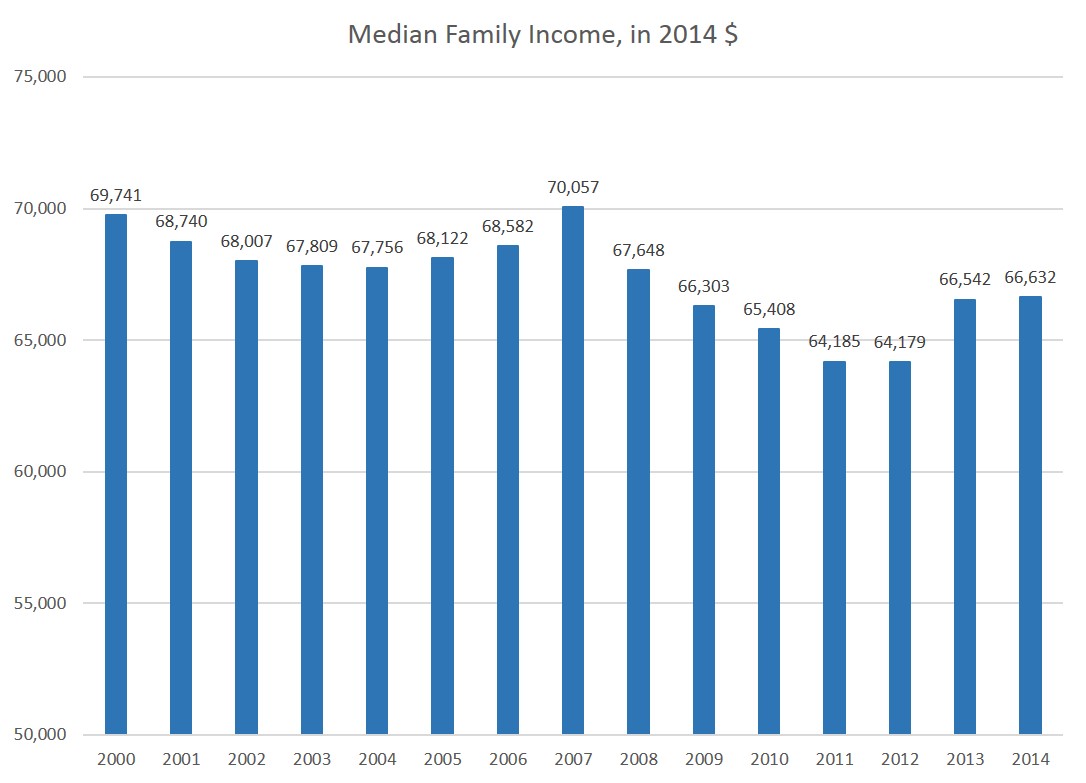 Taken in a larger historical context, we also find that family income increased from cycle to cycle after World War II up until the 2002-2007 expansion. Since then, family income has been either flat or declining. In real terms, income is where it today where it was in the late 1990s: 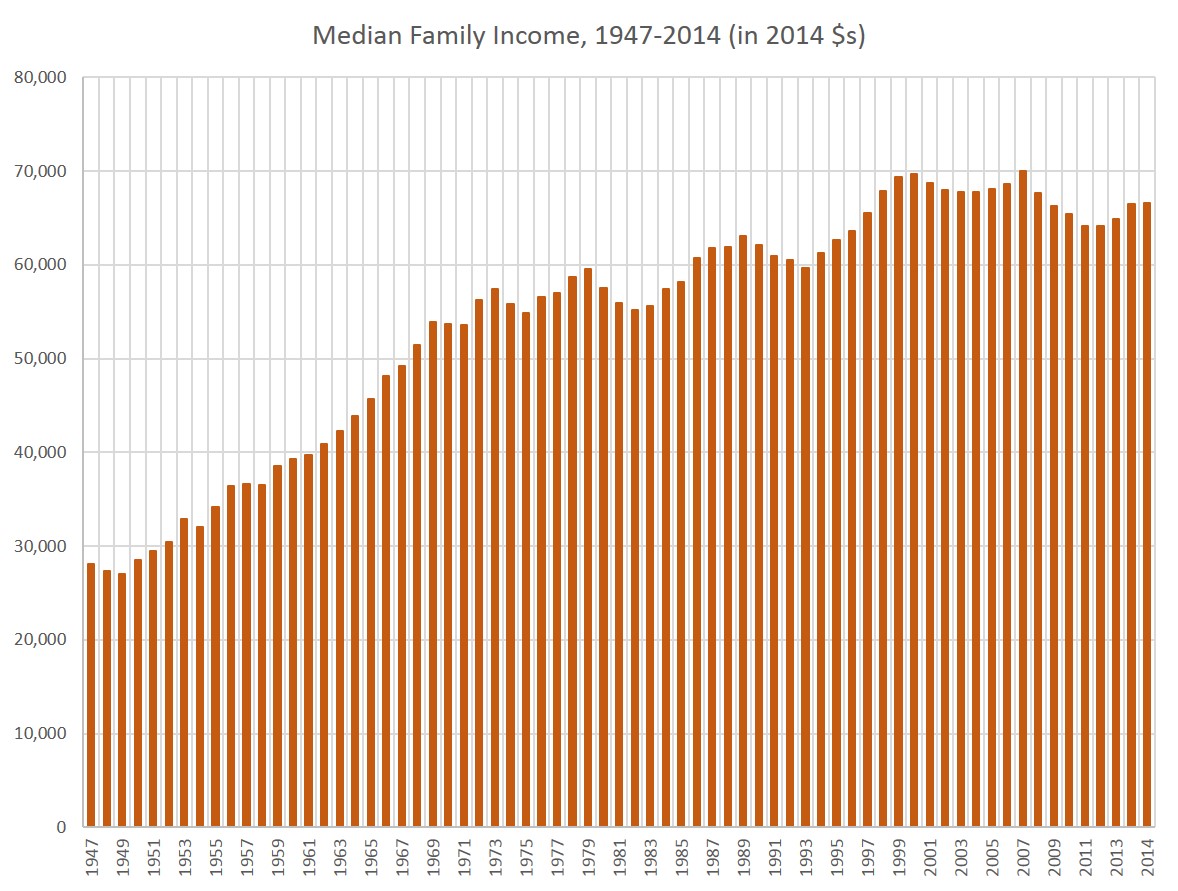 Nor can this be explained away by the fact that household size has declined over time. For example, family size declined 10 percent (from 3.64 to 3.17) from 1950 to 2000, but over that time period, median family income increased 144 percent. From 2000 to 2014, however, family size decreased only 0.9 percent (from 3.17 to 3.14) while median family income fell by 4.5 percent. Even if we look at a more recent time frame, we get a similar result. From 1985 to 2000, median family income rose 19 percent while family size fell 1.8 percent. And with median household data, the results are similar. From 1985 to 2000, median household income rose 16 percent while household size fell 2.6 percent. From 2000 to 2014, though, household size fell 3 percent while median household income fell 6.3 percent. In other words, during cycles previous to the last 15 years, median income rose along side declining household and family size. One might also point to the fact that real median personal income fell 2.7 percent from 2000 to 2014.

So, Crudele is likely on to something.

Part of it may be due to the fact that the larger secular trend in GDP is also down. Here's that same GDP statistic from above, except for a longer time frame: 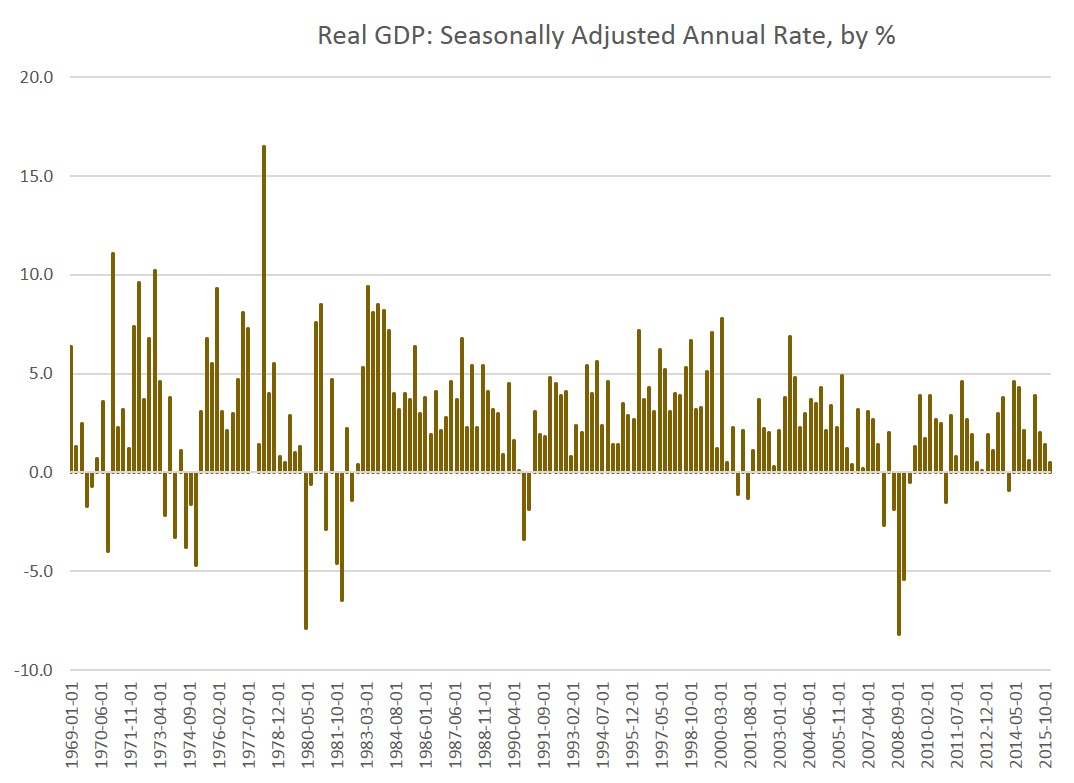 By this measure, it was not uncommon to have GDP growth of 5 percent or more during the 1970s and 80s. Since 2007, though, there has been no period with growth at or over 5 percent.

Moreover, keep in mind that GDP can also be increased simply by increasing government spending (discussed here), so it's helpful to look at GDP growth with government spending subtracted. When we do this, we find a similar trend, with overall GDP growth diminishing over time. Indeed, during the 1970s and early 80s, larger recessions were followed by periods of especially high growth. That doesn't happen anymore: 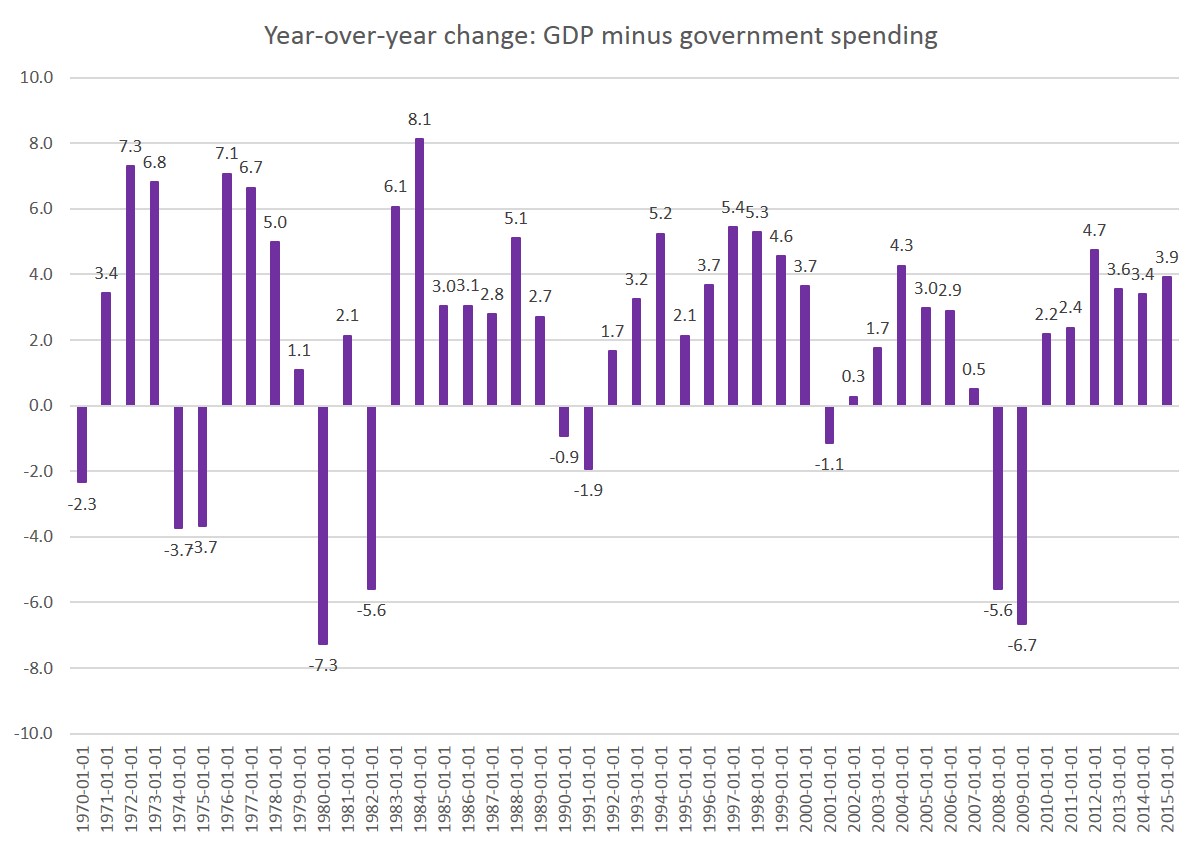 After years of diminishing growth, we shouldn't be surprised to see such lackluster performance in incomes, and declining income does appear to be a new development.

It's easy enough for the media to report a one-year growth rate and to look only at the press-release headlines. A more thorough look, though tends to reveal a more dreary picture.