Generations of elementary economics students since World War II have come away from Economics 101 having learned, if anything, that gross domestic product is defined as GDP = C + I + G + (X - M).

This sort of accounting supplies the basic framework for the Keynesian models that swept the economics profession in the 1940s and 1950s, from which a key policy conclusion was derived—that the government can vary its spending to offset shortfalls or excesses of private spending and thereby stabilize the economy’s growth while maintaining “full employment.” From the beginning, the most emphasized part of this conclusion was that increases in government spending can offset declines in private spending and thereby prevent or moderate macroeconomic contractions.

This, however, is a mistake. Higgs writes:

Why should government product be excluded? First, the government’s activities may be viewed as giving rise to intermediate, rather than final products, even if the government provides such valuable services as enforcement of private property rights and settlement of disputes. Second, because most government services are not sold in markets, they have no market-determined prices to be used in calculating their total value to those who benefit from them. Third, because many government services arise from political, rather than economic motives and institutions, some of them may have little or no value. Indeed, some commentators—including the present writer—ultimately went so far as to assert that some government services have negative value: given a choice, the people victimized by these “services” would be willing to pay to be rid of them.

Higgs notes that not all government spending is included in GDP. Transfer payments, such as Social Security payments, are not included. Many billions in government purchases are included, however. This means that periods in which, say, military and infrastructure spending increases rapidly, we may find that this government spending causes GDP to be overstated.

If we reconstruct Higgs's graph using GDP and government-purchase date through 2016, we get the following graph. Like Higgs, I'm using BEA Table 1.1.6, but I've added in the GDP totals to provide additional context: 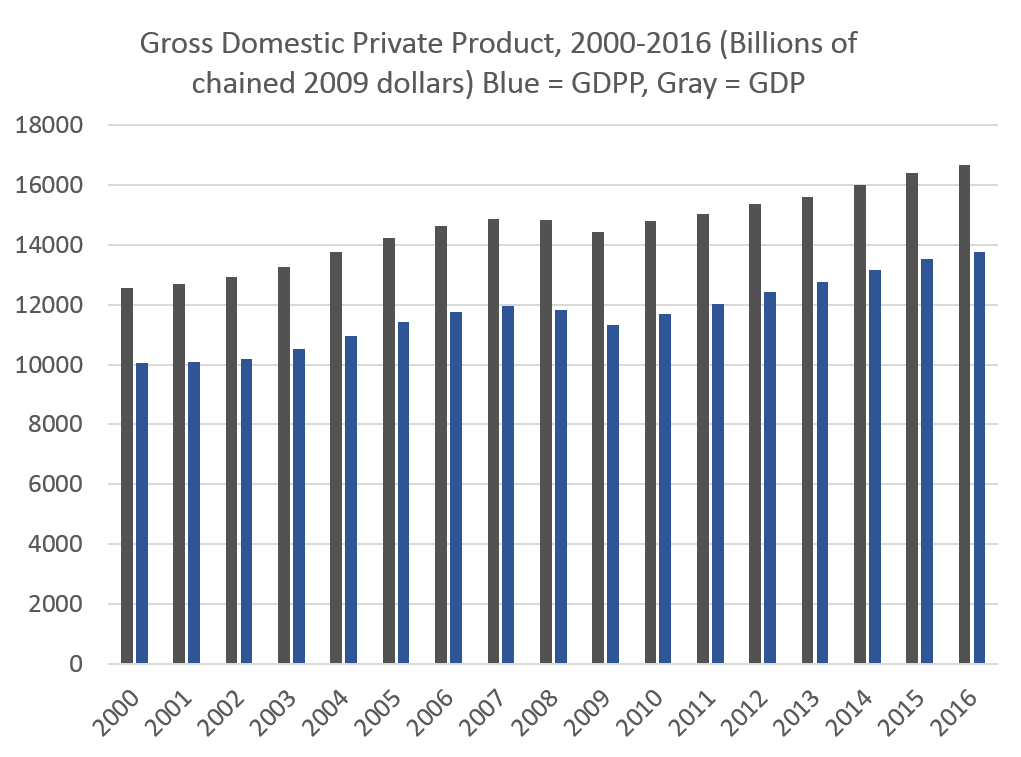 GDPP Growth Has Been Slowing

But, this by itself doesn't tell us much.

To make useful comparison, Higgs looks at GDPP growth after 2000 and compares that to the long term trend in GDPP growth. Higgs finds that between 2000 and 2012, GDPP grew at only about half its long-run average rate. (A similar situation is true for GDP numbers.)

Using the most recent updated numbers we find something similar to Higgs's comparison:

Things are slowing down: 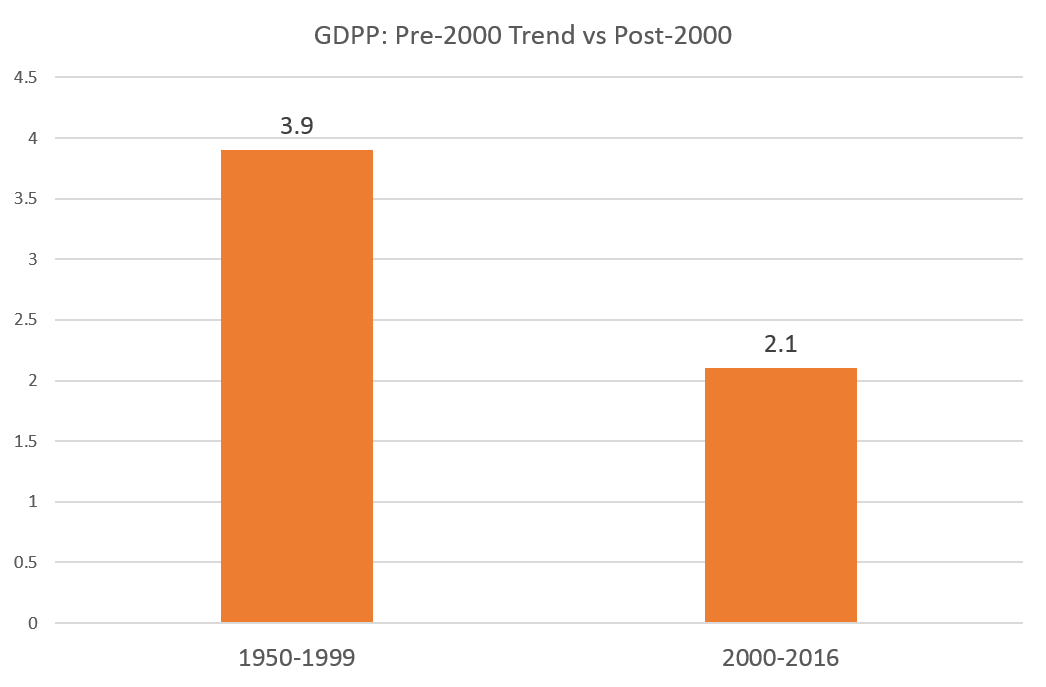 If we look at year-over-year changes in GDPP over time, we can see a gradual slowdown, especially since the dot-com bust in 2001. I've included GDP numbers here also, and they too are slowing down:

The GDP-GDPP Gap: Can It Tell Us About Booms and Busts?

There may be some useful observations we can take away from this analysis. 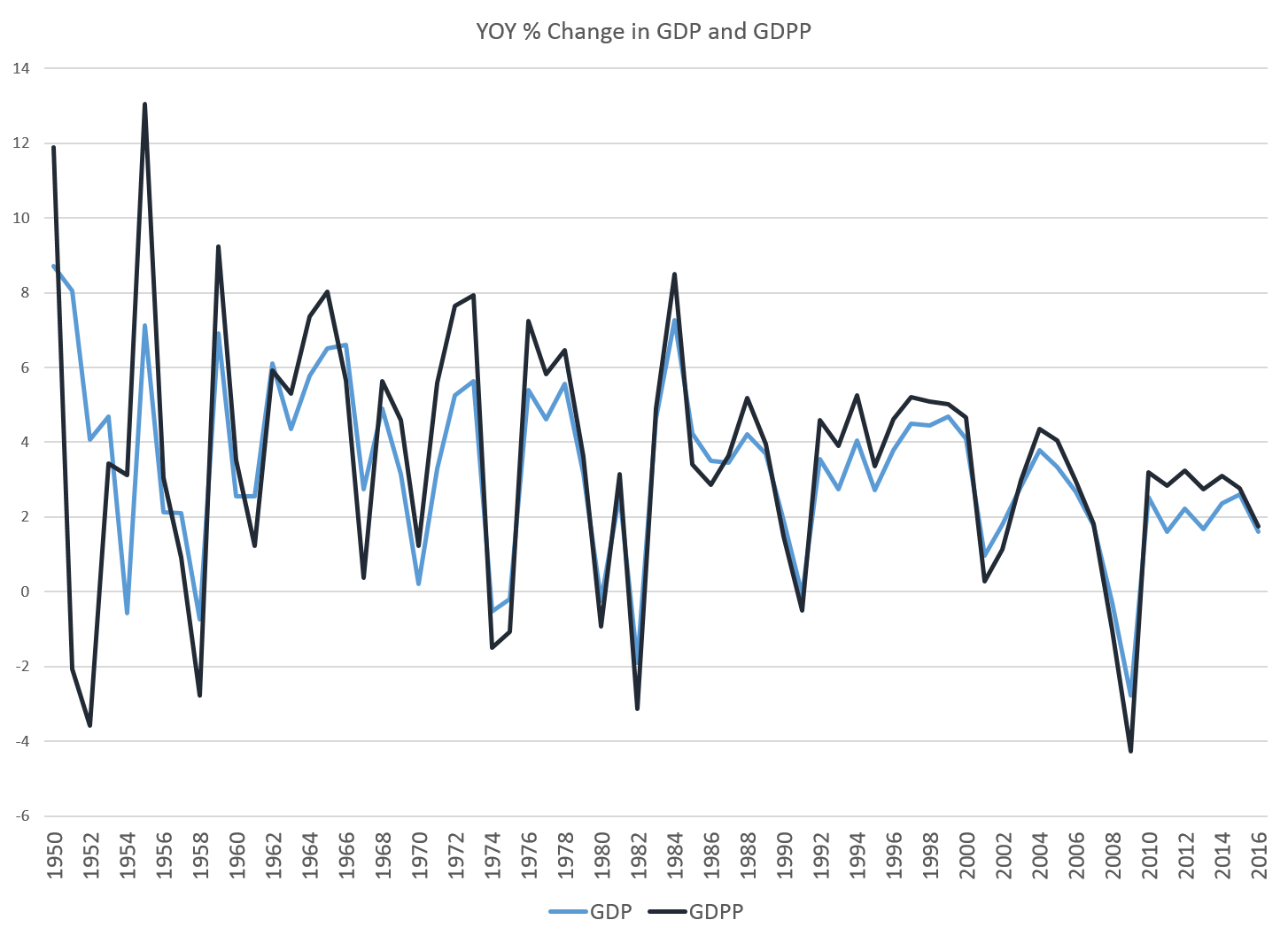 In the third graph above, we see that GDPP often increases, year over year, at a larger rate than GDP. This is especially true when growth in government outlays comes from transfer payments and not from government purchases of final goods. (Again, transfer payments such as Social Security and regular welfare do not factor into GDP under the "government" category. A Social Security recipient's spending gets measured as "private" spending.)

The fact that GDPP tends to fall more than GDP in periods of crisis should not surprise us. When the real economy is slowing, government often continues to spend freely on pricey military projects and other programs that include sizable government purchases. Since GDPP is calculated without these purchases, it is more sensitive to economic downturns than GDP. And, as Higgs's has noted, through this mechanism, government spending can mask the true effects of a financial crisis or recession.

If we look at this comparison on a quarterly basis — instead of the annual numbers we looked at above — we see even more of this relationship.

As with the annual data, we see that both GDP and GDPP growth is getting smaller and smaller. While GDPP growth was routinely above four and five percent in the 1990s, it has barely broken four percent at any point over the past decade. 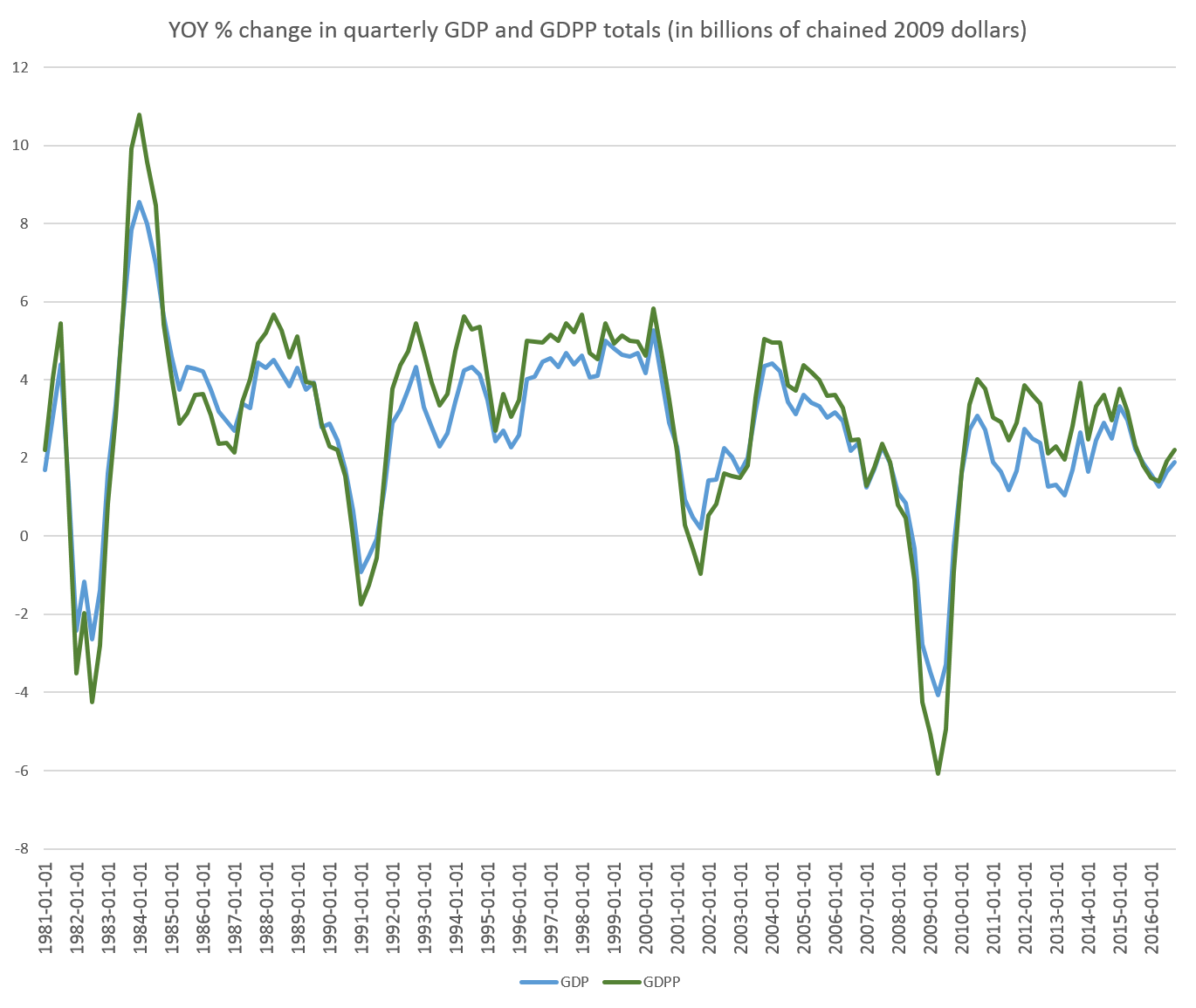 As always, trend watching using quantitative methods is only as useful as the economic theory we can employ to explain the numbers, and it continues to be difficult to identify the timing of any economic disruption. Will we see a bona fide recession in coming years, or will GDP and GDPP growth simply continue to slowly trend downward until its repeatedly below three percent or even two percent?

Higgs's GDPP analysis may be a helpful tool to reconsider and update in the future.