Donald Trump appeared deeply confused this week as the president declared today that "the murder rate in our country is the highest it's been in 47 years."

Perhaps Trump confused the word "highest" with "lowest" since he would be far closer to the truth if he said the homicide rate in the US is "the lowest it's been in 47 years."

On the campaign trail, Trump repeatedly claimed that crime and murder rates are at historic highs in spite of all evidence to the contrary. Trump is likely able to get away with this because, although homicide rates have declined substantially over the past twenty years, Pew reports that 45 percent of Americans polled think that crime and homicide are increasing. 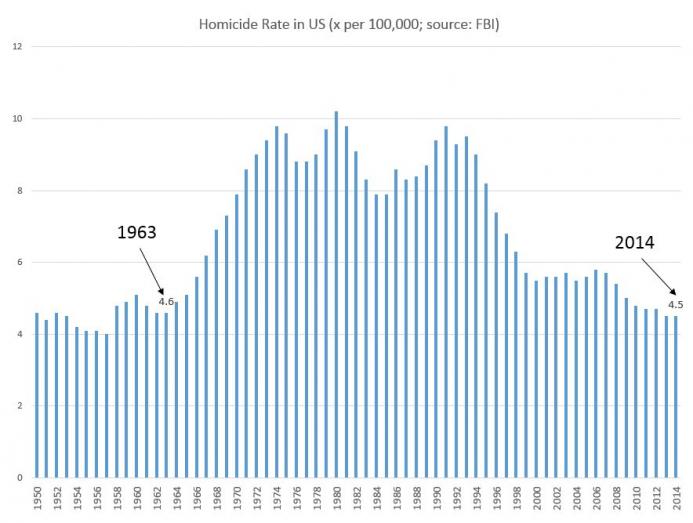 Trump may be reacting to the fact that homicide statistics show an increase from 2014 to 2015 (the last year with year-long data available). 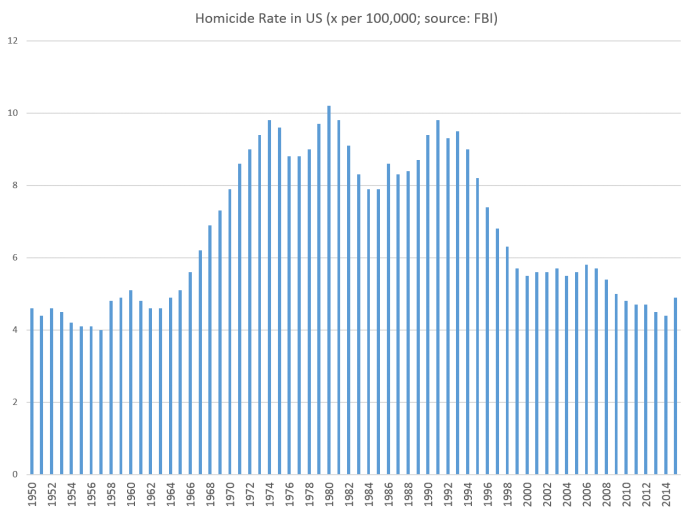 In other words, it's extremely difficult to see how these numbers could be spun to look like homicides are at a 47-year high.

But, perhaps Trump is talking about homicides in Chicago?

After all, Trump has fixated on Chicago homicides and has suggested he'll send in federal officers to take over local law enforcement in Chicago is the government there cannot reduce homicides. But even in the case of Chicago, homicides are near (at least) 20-year lows. They are increasing, however.

Given Trump's usual M.O., it may be that the whole affair is just another case of Trump attempting to pander to a specific interest group. These remarks came in a speech to the National Sheriff's Association, a lobbying group for sheriffs. In addition to claiming that homicides are at historical highs, Trump also vowed to seek retribution against a Texas legislator who has introduced legislation to curtail the government's power to seize private property without due process (i.e., "asset forfeiture"). Trump declared: "We’ll destroy his career.”

These comments suggest that Trump, like much of the American population, is hysterical over crime and homicides when there is no indication that these problems are at unusually high levels. This doesn't mean all is perfectly well, of course. As noted in this article, the homicide rate is increasing, but is driven by only a handful of cities. Homicide rates in some cities remains alarmingly high, even if most of the country enjoys very low rates by nearly any measure one can muster.  If the growth in 2015 represents the beginning of a new trend, it is cause for concern. Needless to say, Trump doesn't exactly capture the nuance of this situation, nor is it likely he even knows anything about the situation other than the bullet point some staffer fed to him before today's meeting.

Trump is not alone in attempting to play homicide data for political gain. The Left has long hinted or implied that crime is surging as part of the left's efforts to increase gun control. To its credit the left knows how to use Google — unlike Trump, apparently — and so never claimed that homicide rates are at historically high levels. The furthest the Left has generally been willing to go is to suggest that "mass shootings" are increasing the homicide rate and that homicide rates are higher in the US than in the rest of the so-called "developed" world.

Both of these claims are themselves extremely sketchy and rely on twisting the data or conveniently ignoring data that contradicts their position. In this US, a nation of 320 million people, the odds of being a homicide victim in a mass shooting are so vanishingly small as to be essentially zero. 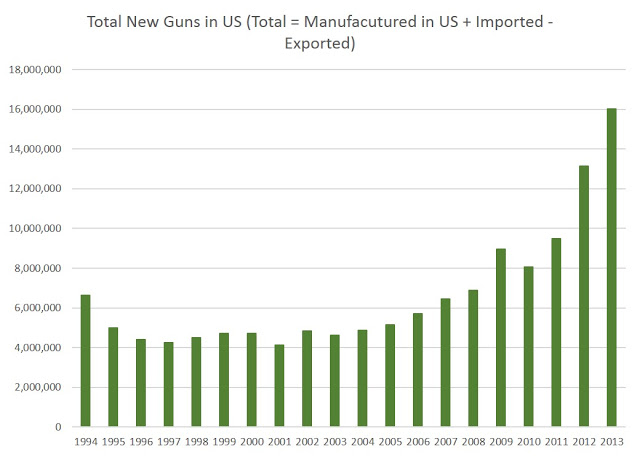 Whatever the politician's agenda, the fact remains that homicide rates are low by historical standards, and this is in spite of rapid increases in gun ownership over the past twenty five years, and in spite of continued immigration.

Trump's behavior on this matter demonstrates a continued knee-jerk preference for increasing government power to address every perceived problem. In the case of Chicago crime, he advocates sending in federal agents to take over. He advocates the use of Presidential power to destroy a legitimately elected state legislator who wishes to rein in the abuse of law-enforcement power. He has repeatedly advocated increasing federal immigration power — a power not granted to the federal government in the Constitution — to address what Trump sees as some sort of immigrant-fueled crime "crisis."

The national mainstream media, of course, has now suddenly decided to report on just how low homicide totals have been in recent years. The media was AWOL on this matter all those times national pundits and President Obama declared there was a homicide crisis thanks to private gun ownership. It's too bad that Donald Trump has apparently adopted the mainstream media narrative on crime over the past decade.