GET NEWS AND ARTICLES IN YOUR INBOXPrint
A
A
Home | Wire | Roll Call: 'The Deficit Debate Has Disappeared'

It's long been apparent that the Republican party has no interest in making any significant cuts to government spending.

In fact, looking at GOP presidents since Nixon, it seems that Republicans like to increase government spending more than Democrats. 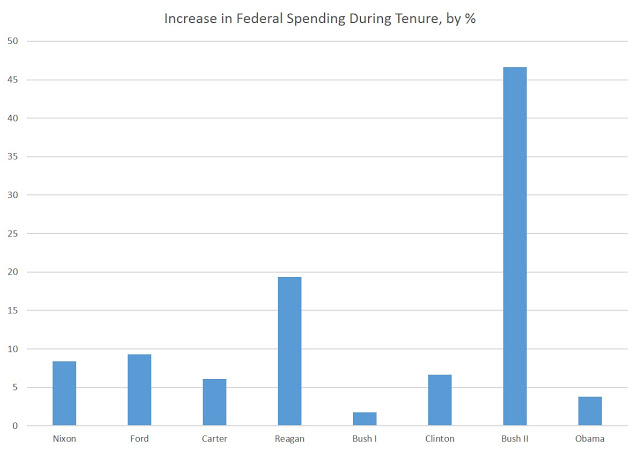 Nor does it seem there is any salvation to be found in "gridlock." The DC consensus is strongly in favor of unimpeded federal spending.

Nevertheless, the Republicans have long kept up the ruse that they're in favor of balancing the budget, cutting the deficit and engaging in "limited" government. Some have kept up the spending even while cutting taxes. This has only led to back-door tax increases.

But that has changed this election. Don't worry, the Republicans haven't decided to actually start cutting the budget after years of lying about it. No, what's different this year is that the Party's presidential nominee — and hence, much of the Party — isn't even pretending to be in favor of any real budget cutting or budget balancing.

Trump’s candidacy is making plain an open secret in Washington — that Republicans aren’t as committed to fiscal discipline as they pretend. And it’s given Democrats an opening to lay claim to fiscal responsibility, territory long dominated by the GOP. Deficit hawks say they feel homeless. Neither party is pushing to end the era of Big Government anymore.

Roll Call called me about it to ask why no one even pretends to care about budget cutting anymore:

[I]nstead of getting more serious about fixes for the entitlement programs that are causing it, the deficit as a campaign issue has disappeared, and not just from the presidential race. The Political TV Ad Archive, a nonprofit news organization that is tracking political advertisements, has found only fourteen ads this cycle that even mention the word “deficit.”

The candidates, perhaps, are acting with an eye on the voters’ concerns and the deficit is not a big one. In January, the Pew Research Center found that respondents to its poll ranked the deficit behind eight issues they think are more pressing at the moment, from the economy and terrorism to health care costs and reducing crime.

During Obama’s second term, no issue has fallen further in Pew’s survey. At the start of the term in January 2013, the deficit ranked behind only “improving the jobs situation” among public concerns.

Politicians can also look at what inspires voters and see, at least this year, that austerity doesn’t sell. “If you want to blame someone, you can blame the voters,” says Ryan McMaken, an editor at the Ludwig von Mises Institute, a libertarian think tank. “The voters have not shown, at least not at the national level, a big inclination toward budget-cutting.”

While it's true there may be some budget-cutting inclinations at the state and local levels, programs like Social Security and defense spending have simply become too sacrosanct to bother with cutting anymore. When polled, the overwhelming majority of those polled report they don't want cuts to programs.

Consequently, we shouldn't be surprised when no one in DC actually cuts any spending.