Public Servants: Who is Serving Whom? | Mises Wire
Skip to main content

GET NEWS AND ARTICLES IN YOUR INBOXPrint
A
A
Home | Wire | Public Servants: Who is Serving Whom?

Public Servants: Who is Serving Whom?

Tags Taxes and SpendingInterventionismMonopoly and Competition

When was the last time you used a government “service”? Maybe you went to the DMV to get a new driver’s license, or maybe you signed up for new healthcare plan using Healthcare.gov (you’d better — or else!). Whatever transaction it was, there was a government employee on the other end — or as some like to call them, a public servant.

Though the public’s perception of the Federal government is near rock bottom, there is still a generally positive view of government workers. A recent post from the official White House blog asks citizens to consider “making a difference as a public servant,” knowing that your work would help “make someone’s life just a little bit better.” (Presumably, those who are not public servants do not perform work that “makes a difference” or makes anyone’s life better.)

There’s even a Public Service Recognition Week every year during May. From the president's proclamation on public service this year:

A Government of, by, and for the people is sustained only through the hard work and extraordinary sacrifice of millions of citizens willing to serve the country they love.

I am not interested in judging the hearts of government employees, but do public servants in reality make “extraordinary sacrifices” compared to everyone else?

A study by the government’s own Congressional Budget Office (CBO) claims public sector employees earn more money and benefits than private sector employees, with the exception of those with a doctoral degree: 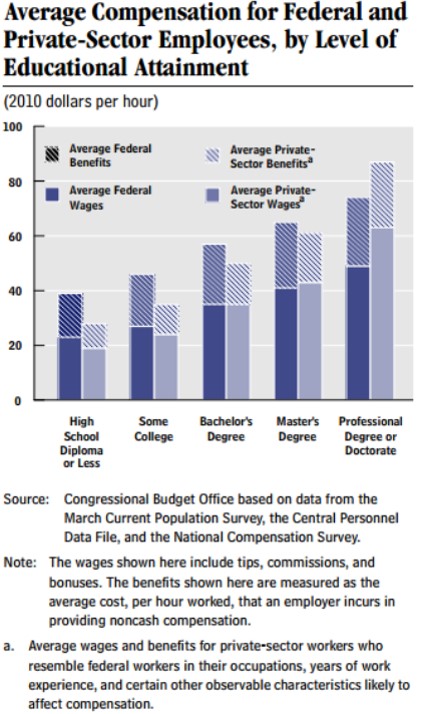 The study says Federal workers with a professional or doctoral degree make up 7 percent of the Federal workforce. Therefore, 93 percent of Federal workers earn higher salaries plus benefits than comparable workers in the private sector. I'm still waiting for the "extraordinary sacrifice" we keep hearing about.

The Cato Institute makes a similar finding: “In 2014 total federal compensation [pay + benefits] averaged $119,934, or 78 percent more than the private-sector average of $67,246.” Even the New York Times seems to reluctantly concede that state and local government workers earn more.

Maybe the word servant makes you think of a butler or maid in some grand European estate. They labor away at menial, inglorious tasks without much recognition.

What if most of the servants make more money than the family for whom the servants work. Would they still qualify as servants?

If their compensation is not less than the private sector, some may say public servants provide more important services. Even here some doubts are warranted.

The average 401k is pessimistically forecasted by some to return 4 percent per year, while Social Security’s return on “investment” is less than optimal. For example, a single female turning 65 in 2030 will have paid $411,000 into Social Security and will only receive $371,000 in benefits. (For those of you not math savvy, that’s less than a 4 percent yearly return.)

Surely, the police are a government service bringing valuable security to civilians. Just a glance at the headlines over the last few years shows that is not always the case: Ferguson, New York, Baltimore, etc. Meanwhile in the private sector, the security company Threat Management in a decade of operation claims to have had “no deaths or injuries — either to our clients or to our own people — no criminal charges, and no lawsuits.” By the way, Threat Management provides their services to the poor for free.

But wait, you say, who else will study shrimp on treadmills? Undoubtedly, this is an area where the government excels. I could go on and on.

As Frédéric Bastiat explains, the billions and billions in the civil servant payrolls does not descend miraculously on a moonbeam into the government’s coffers. They come from taxes. Bastiat says: “…understand that a public enterprise is a coin with two sides. Upon one is engraved a laborer at work, … that which is seen; on the other is a laborer out of work, … that which is not seen.” That is, money removed from the free economy via taxes is not allowed to go to whatever investment the owners of that money would have used it for, consequently generating another worker’s salary.

Bureaucrats are net tax consumers [, and] bureaucrats cannot pay taxes. ... [T]he bureaucrat who receives $8,000 a year income and then hands $1,500 back to the government is engaging in a mere bookkeeping transaction of no economic importance (aside from the waste of paper and records involved). For he does not and cannot pay taxes; he simply receives $6,500 a year from the tax fund.

Furthermore, taxes are involuntarily extracted from the public, the lucky benefactors of the service provided. It is hard to deny that in other relationships where someone is demanding money from someone else, we do not refer to the demander as a servant. “Internal Revenue Service” is the name of the tax agency. Who is it serving?

This hardly needs mentioning, but public servants are much less likely to be fired than workers in the private sector. Following the Great Recession (2007–2009), the private sector had cut 3.5 percent of jobs by 2010. The public sector (Federal, state, and local) only cut 0.5 percent.

From the Federal Times on public employment generally:

The private sector fires nearly six times as many employees — about 3.2 percent — according to the Bureau of Labor Statistics …

For the sake of argument, let’s just say we need government employees for maintenance of fisheries, mail delivery, and invading Middle Eastern countries. Fine. Can we at least dispense with the misnomer public servant? A servant who makes more money than those “served” (by threat of force), provides subpar service, takes away jobs, and is immune to firing cannot be accurately titled servant.

Matthew Bankert (mattbankert.com) is a software developer and musician writing from Maryland. He converted to the freedom philosophy after reading Ron Paul’s book The Revolution in 2008.

Matthew Bankert (mattbankert.com) is a software developer and musician writing from Maryland. He converted to...