As discussed last week, the US is no different from other Western nations in regards to the amount of wealth it redistributes via public policy. Through legislation, tax policy, and outright government spending, social expenditure in the US amounts to 28 percent of GDP, second only to France, with 31 percent.

A separate but important question, however, is "how is this money spent, and to whom does it go?" The US government (among many others) loves to redistribute money, but who gets it?

It turns out that in a large number of European governments and in the USA, many of the benefits paid out by government agencies go back to the income groups that paid the taxes in the first place, and much of it goes to middle-income groups. It is very wrong in most cases, however, to assume that most of the redistributed income is going to the lowest income groups.

In fact, with so much tax money being spent on old-age pensions and health care — which are not dependent on the recipient being impoverished — only a small percentage of government benefits are going to the poorest groups, in many cases. And the US, it turns out, gives more in cash benefits to the lowest-income group than many other countries measured.

Much of the Government Spending Goes to Pensions and Health Care

Health care spending in one of the biggest drivers of government spending in the modern "developed" world. The US is no different and is fourth in the world in the amount of government health care spending per capita. According to this report, the US is behind only Monaco, Luxembourg, and Norway in this measure. Government agencies in the US spend $3,426 per capita on health care as opposed to $4,091 in Norway, $5,996 in Luxembourg, and $5,750 in Monaco. All other countries spend less per capita. I have added Switzerland, the Netherlands, and the UK below for some perspective.

(The US in number one in the world when total health care spending (including private spending) is included for a total of $7,164 per capita): 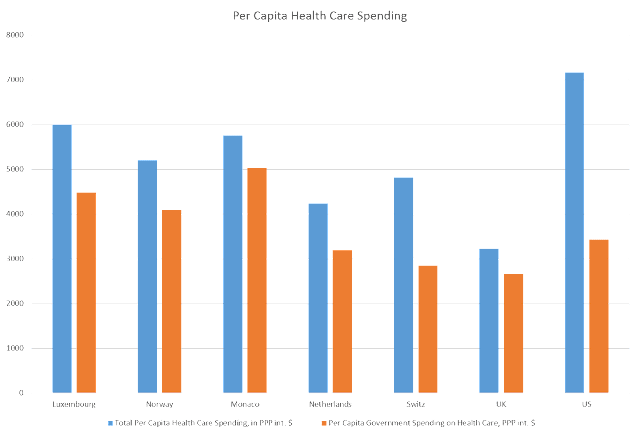 With governmental social expenditures, as a percentage of GDP, the US spends eight percent on "health" according to this OECD report. This is about equal to Belgium and the Netherlands, and higher than both Canada and Australia.

The other big component here is pensions, through which the US spends  6.7 percent of GDP. That puts it about equal to Switzerland, and higher than both Canada and Australia.

Where the US differs from other countries measured, however, is in how much social expenditure goes to working age people. The US spends 2.4 percent on "income support" to the working age population. This number is much higher in most other countries surveyed (except Japan). It is 7.9 percent in Denmark, for example, 4.1 percent in Switzerland, 4.8 percent in Australia, and 4.6 percent in Canada.

In the US, money redistributed to working-age people is often known as "welfare," while government pensions (e.g., Social Security in the US) are claimed to not be welfare at all. In truth, of course, both are simply transfers of wealth from current wage earners to other wage earners or non-wage-earners. Here's the overall breakdown: 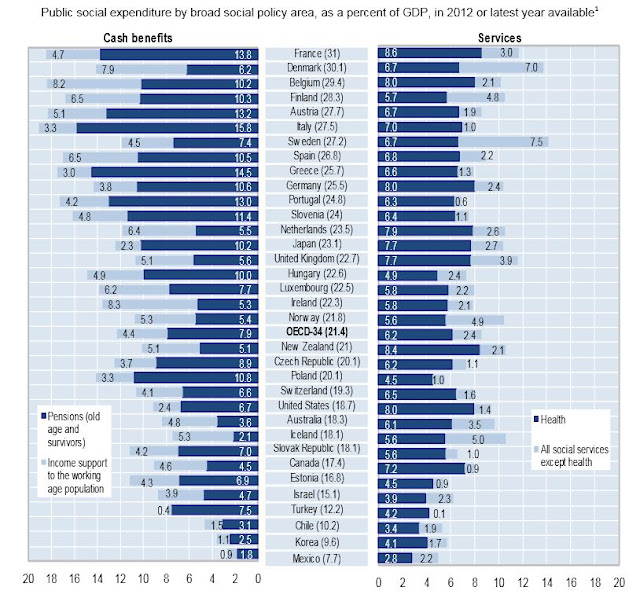 One important aspect of pensions and health care spending is that both are not necessarily tied to income levels. Programs like Medicare and Social Security are not designed to go only to low income people.  If grandpa has paid off his house and spends half the year vacationing in a luxury RV, Social Security and Medicare still apply.

As the OECD report notes:

Social cash benefits can be made for different reasons to different households, including because people are retired, disabled, unemployed, or otherwise without source of income, or to help out with the cost of children or support households when they are on leave taking care of very young children or sick and/or elderly dependents. Benefit receipt can thus depend on different contingencies; it does not necessarily mean the receiving household is poor.

Tax Revenue is Often Spent on the Top Income Group 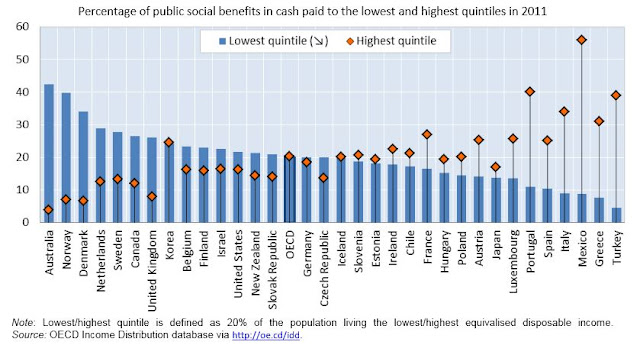 This measure is just for cash benefits, so we can't generalize to all benefits. Nevertheless, we can say, that at least in terms of cash benefits, there really is a transfer of wealth down from the highest quintiles to lower quintiles in Australia, Norway, Denmark, the Netherlands, Sweden, Canada,  and the UK.

We can say this because the higher quintiles tend to pay much more in taxes, since, of course, they're the ones with more income and more assets.

(Note: to get a sense of  how much the US spends in cash benefits overall, note that the US spends more "net cash direct social expenditure" as a percentage of GDP than both Canada and Australia.)

For those countries where the highest quintiles get more benefits, we can say that in those cases — such as Portugal, Spain, Italy, and Greece — the higher quintiles pay their taxes, the government takes its cut, and then pushes the benefits back out to the same economic class that paid the tax in the first place. It's just a scheme that gives the government the chance to take a cut without redistributing wealth to a different economic group.

In terms of cash benefits, we can see that there's much less redistribution of wealth downward in southern and eastern Europe than in northern Europe, Canada, and Australia.

Contrary to it's reputation however, the US is closer to the countries that redistribute a sizable portion or wealth downward, than to the countries that don't. In other words, if we're looking at how much money moves from the highest quintile to the lowest quintile, the US does more of this than most of the countries measured.  Even though the top quintile of earners pay 84% of the income tax (excluding payroll taxes) in the US, only about 20 percent of cash benefits go back to the top quintile. More goes to the bottom quintile than to the top. (The rest goes to the middle quintiles.) This is not true in Iceland, Ireland, France, Austria, or Luxembourg. In Austria, for example, where top income earners pay a 50-percent income tax, the top quintile also gets more in cash benefits than the lowest quintile does.

Politically, this makes sense of course, since it's easier to sell a government program on the idea that those paying the taxes will also at least get some of it back. Social Security in the US is a perfect example.

As far as redistributing wealth downward through cash benefits, however, the US is not nearly the outlier that many think it is. By this measure, the US differs little from Belgium.

Were we to expand this analysis, we would likely find that in many countries, there is in fact little movement of wealth from one quintile to another. For example, it is likely that the wealth extracted from the middle quintiles goes back to the middle quintiles in many cases. When that is the case, the greatest beneficiaries are government employees and government agencies that did not make any net contribution to government revenue in the first place.

The velocity of money does not have a life of its own. It is not an independent variable and it cannot cause anything, let alone offset the effect of increases in money supply on the prices of goods.

What Spooner Can Teach Us in Our Age of Neofascism

Ryan McMaken is a senior editor at the Mises Institute. Send him your article submissions for the Mises Wire...