It's Not Urban vs. Rural — It's Suburban vs. Urban | Mises Wire
Skip to main content

GET NEWS AND ARTICLES IN YOUR INBOXPrint
A
A
Home | Wire | It's Not Urban vs. Rural — It's Suburban vs. Urban

It's Not Urban vs. Rural — It's Suburban vs. Urban

Rural America continues to be a topic of political conversation. For many journalists and pundits, this focus comes out of a belief that rural America is the primary driver behind Donald Trump's political base. "Rural Resentment," for example, is the title of an article last week at Slate which, in its own words "discussed how rural dwellers see city folk."

That's all well and good, but the rural population in the United States is only a small and shrinking part of the coalition that put Donald Trump in the White House. Moreover, the rural population today, according to Census Data and the Kaiser Family Foundation, comprises only 14 percent of the US population nationwide. 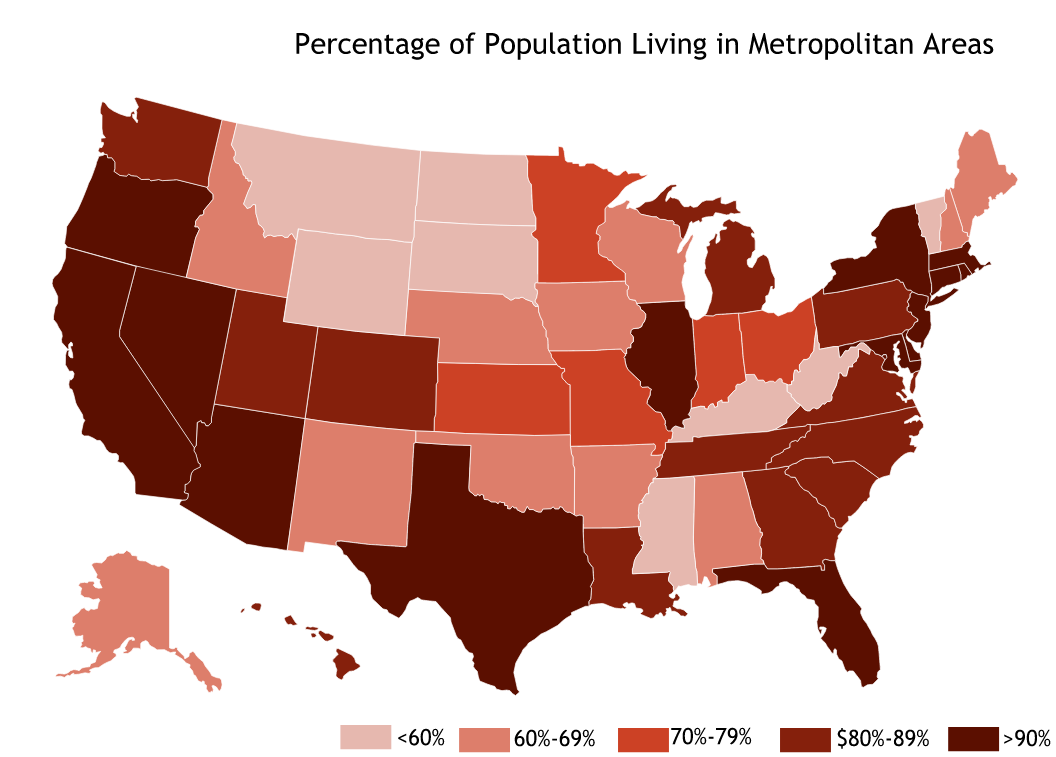 Moreover, rural areas are a shrinking phenomenon, largely because the industries that drive rural settlement — agriculture and natural-resource extraction — are employing fewer and fewer people.

If we look at this through a political lens, we see that — while Trump was no doubt helped by voters in rural areas — he couldn't have won the 2016 election without a lot of help from people living in metropolitan areas.

In the Dallas-Ft Worth Metroplex, for example, the only county (out of 12) that voted in the majority for Hillary Clinton in 2016 was Dallas County. A plurality of the voters in the 11 other counties voted for Donald Trump. While Dallas County voters delivered 461,000 votes to Hillary Clinton, neighboring Tarrant County alone contributed 345,000 votes to Donald Trump. Nearby Collin County delivered another 200,000 votes to Trump. Once the other 9 metro counties are factored in, we find that Donald Trump rather easily won the metro area overall.

We find a similar phenomenon in the Orlando metro area in Florida. During the 2016 presidential election, only two of the seven counties in the metro area — Orange and Osceola — reported a majority vote for Hillary Clinton. All other counties went for Trump, including populous Lake and Seminole Counties. Overall, Trump won a slight majority in the metro area.

Yes, Trump handily won in states with relatively high rural populations including Kentucky, and West Virginia. But he also won majorities in states where fewer than 3 out of ten people were rural, including Arizona, Texas, Florida, Utah, and South Carolina.

Now, it's important to keep in mind that just because someone lives in a metropolitan area, that doesn't mean the person lives in a core city.

Yes, the differences in voting patters between rural and core-city residents is stark. However, given the relative insignificance of the rural poulation within many states, the political and cultural divide may be better explained by looking to the metro areas themselves. The conflict resides just as much within metro areas where core urban areas tend to vote one way, and suburban areas tend to vote another.

If we fail to look carefully within the metro areas themselves, we quickly find the information we get is less than illuminating.

For an illustration of this, we need look no further than two major ballot issues that took place in California over the past 25 years.

The first was the statewide vote on the infamous Proposition 187 in 1994. This was a ballot measure that would have mandated that public welfare institutions, including public schools, deny taxpayer funded services to illegal immigrants. The ballot measure won easily, garnering 58 percent of the vote. Our modern narrative would have us believe that metro areas voted against the measure while the country folk in the rural areas voted for it. This however, is not what happened. If we look at a map of the voting results, we find that a majority of the voters in all all metropolitan counties in southern California voted to approve the measure:

Although the vote took place more than 20 years ago, we can hardly say that a large rural population in 1990s California was skewing California to the "yes" side on this issue. California was already a thoroughly metropolitan state by the 1990s, and the overwhelming majority or residents lived in the metropolitan areas of California. 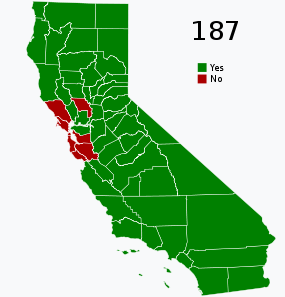 We can also see similar voting patterns within the last ten years, with Proposition 8. 2008's Proposition 8 was a ballot measure that banned government sanctioned same-sex marriage in the state. It passed with 52 percent of the vote. As with Proposition 187, we can see that the measure received significant support within metropolitan areas. Indeed, with the exception of Santa Barbara County, all southern California counties — including the heavily metropolitan areas of Los Angeles, Orange, and San Diego counties — voted in favor of the measure:

Once again, we find that the urban-rural divide fails to provide a sufficient explanation for cultural and political divisions in the United States. It is often stated that California is characterized by conflict between big cities on the coast and the more rural interior. A more accurarate assessment would have to include very real conflicts within the metro areas themselves. 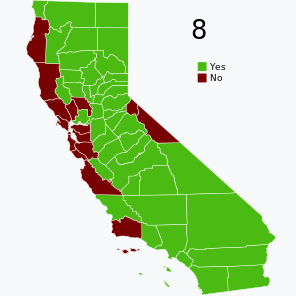 This Suburban Population is Growing

The metropolitan population in the United States continues to grow, but only some of that growth is going to core cities.

Hipsters and leftist pundits like to predict a future when everyone will live in shimmering skyscrapers and take light rail to work. But so far, no data suggests this future will be arriving any time soon. Pro-suburb researcher Joel Kotkin often says as much, and last year Kotkin and Wendell Cox wrote:

The suburbs, intoned The Atlantic a few years back, were where “the American dream goes to die.”

In reality, the census estimates released this month reveal a very different story, both here in Southern California and nationwide. Rather than becoming more urban, the country continues to become more suburban, with less-dense areas and regions gaining more population than their inner-city cousins.

Indeed, rather than exiting to the city, people are actually doing the exact opposite: heading to both the suburbs and the sprawling cities of the Sun Belt. Overall, suburban populations are growing faster in all but a handful of metropolitan areas. The perceived “historic shift” toward the urban core — based, in part, on two years of slightly higher core growth in the wake of the housing bust — has now reverted to its traditional path of dispersion.

The new numbers tell us something that was already evident to anyone who bothered to follow the recent U.S. Census Bureau reports, which once again follow well-established pathways. Since 2012, suburban and exurban counties have again grown faster than the urban ones; and this does not even account for the fact that suburbs and exurbs already constitute a much larger part of the U.S. population — seven times the population of urban cores in metropolitan areas over 1,000,000 population.

This isn't to say that no one's moving to the core urban areas. There are still plenty of people doing that. But, it would be a grave mistake to assume that, as rural areas continue to disappear, urban core dwellers are all that are left in their wake.

The truth is far more complicated, and the urban/suburban divide will continue to be an important part of American politics and American economic theory well into the future.

Tying one's political and ideological fortunes to the rural population is clearly a grave error. With an aging population — barring some major changes in technology and logistics — the countryside will continue to empty over the next 20 years. (As the Spanish experience shows, this isn't just an American phenomenon either.)

Suburban metropolitan populations, on the other hand, are likely to continue to grow for any number of reasons. This does suggest, however, continued conflict over state- and federal-level government spending, urban planning, and a host of other issues where urbanites and suburbanites attempt to use state and federal government institution to assert themselves over the other side.

State governments, especially, will continue to be battlefields where politicians from small, high-population urban areas will attempt to set policy for vast swaths of urban and suburban areas of each state as dueling majorities fight each other in the state legislatures.

It's likely that the American media will continue to run stories that attempt to understand "rural resentment" and the rural voters who voted for Donald Trump. For the average journalist, these people must seem exotic, unknowable, and possibly worthy of study like animals in a zoo.  But, if the media class is looking for a more convenient way to take a look at "the other side," they often need look no further than the suburban county next door.

The Purpose of Political Demigods like Lincoln and the "Founding Fathers"

How do we convince people to submit themselves to the regime or to even die for it? Convince them that the regime was founded and sustained by a breed of superhuman "statesmen" like Wilson, Lincoln, and the "Founding Fathers."