GET NEWS AND ARTICLES IN YOUR INBOXPrint
A
A
Home | Wire | It's Not Just a Supply Issue: Oil Price Falls to 35 Dollars per Barrel

It's Not Just a Supply Issue: Oil Price Falls to 35 Dollars per Barrel

According to the LA Times, the US crude slumped to $35 per barrel this week, "the lowest price since early 2009."

Up through last week, the West Texas Intermediate Crude price had fallen to 40 dollars per barrel, putting it close to the sorts of prices we saw during the dark days of the last recession. If this week's trends keep up, we'll be headed back to ten-year lows in oil prices: 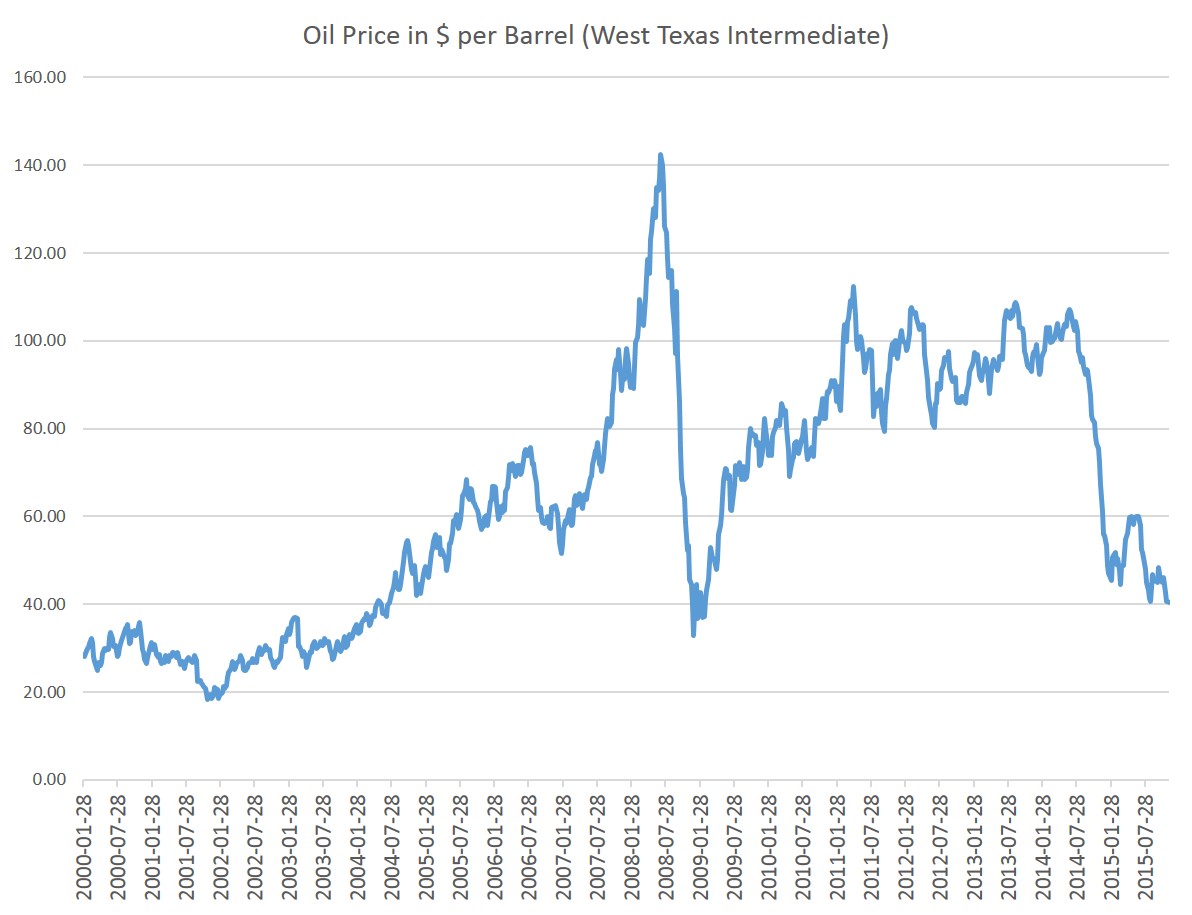 A year ago, the oil price was more than 30 dollars per barrel higher, and came in around 70 dollars, although by that point, the price had already tumbled from a price of 105 dollars that had been reached during mid-2014.

The 2014 prices were not as high as they seemed, given the effects of price inflation. If we make a  mild adjustment based on the official CPI data, we find that 2014's peak levels had really only been matching the prices we saw during the early 80s. Those prices are indeed near historical highs, but the decline since then has not taken us down to historically cheap gas in real terms (in 2015 dollars): 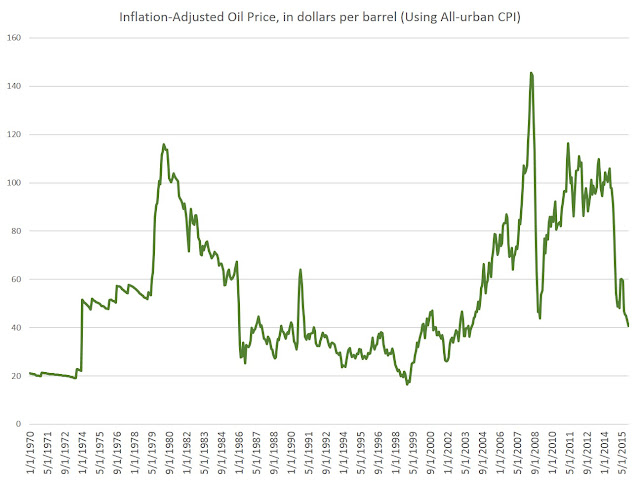 Source: US energy Information Administration and Bureau of Labor Statistics

Even with today's relatively cheap gas, we're still looking at real prices that are above the good ol' days of the 1990s.

Nevertheless, prices are no longer what they need to be to sustain much of the shale oil industry. As Retuers reported yesterday:

Drained by a 17-month crude rout, some U.S. shale oil companies are merely hanging on for life as oil prices lurch further away from levels that allow them to profitably drill new wells and bring in enough cash to keep them in business.

The slump has created dozens of oil and gas "zombies," a term lawyers and restructuring advisers use to describe companies that have just enough money to pay interest on mountains of debt, but not enough to drill enough new wells to replace older ones that are drying out.

Meanwhile, CNBC reports that the energy sector became the biggest "job cutter of 2015." It was only 18 months ago that we were still hearing about how oil jobs — and especially shale oil jobs — were going to save us from any serious downturn in jobs.

Moreover, much of the nation's economic growth was coming from a handful of oil-rich states, including Texas, Oklahoma, and Colorado, among other places. It's not a coincidence that the BEA reports the highest GDP growth in 2014 in California, Texas, Oklahoma, North Dakota, and a few other Western States.

Those areas may now be in trouble, and national GDP will suffer the more oil rigs go dark. Texas has been the salvation of the nation's overall jobs-gains totals in recent years, as Texas's size and oil-based wealth has made the national numbers look much better than they would have without Texas. But the statisticians at the BEA and BLS may not be able to rely on Texas much longer. The Arkansas Democrat-Gazette reports:

Unemployment in Texas may surpass the national rate in the next year for the first time since 2006, according to Prestige Economics, JPMorgan Chase and ING Bank. Texas is already experiencing a "rapid deceleration" in job growth to just a third of what it was last year following a slump in oil prices, said the Wood Mackenzie consultancy group.

Perhaps in an attempt to put a silver lining on the matter, many continue to cling to the belief that the collapse in oil prices is driven almost entirely by excess supply. In other words, we're being told that there's still plenty of good hearty demand out there, it's just that we extracted too much oil.

If it's just a problem of too much oil supply, the thinking goes, then there's not all that much to worry about because people will take all the money they saved on gasoline or fuel and spend it somewhere else right away.

However, The Wall Street Journal admitted yesterday that this doesn't seem to be happening. The subtitle reads: "Experts expected the drop in gasoline and oil prices would jolt spending by U.S. consumers and businesses. It hasn’t turned out that way."

It hasn't worked out that way because demand is much weaker than the "experts" are willing to admit. As I noted here earlier today, median income and wages are lackluster at best, and there's little reason to believe that consumers are just itching at the chance to spend away any money they might save at the gas pump.

Like the owners of oil rigs, consumers have plenty of debt to deal with. Or they may be realizing that their incomes aren't going to go up as much as they hoped. Or they may just be uncomfortable enough about the future that they're saving a little more than usual.
In other words, some individual households may be doing the right thing. By saving and cutting back on spending, they're imposing a temporary "recession" and temporary drop in their standard of living on themselves at the household level to make up for some past malinvestments. This would especially be true of people employed in energy-related fields or other bubble industries. They made a mistake by investing their time, labor, and energy into an industry that was really based on malinvestments stemming from what David Stockman calls the Fed-money-fueled Wall Street Casino. When enough households do this, the overall economy will go into recession which — if left alone — would repair the economy.  The Fed, however, will do everything in its power to keep that from happening. If the energy sector will no longer do the trick, the Fed will find some other sector to flood with money, just as the housing bubble replaced the dot-com bubble beginning in 2002.

Yes, all things being equal, falling oil prices would free up funds for other types of spending. But when there are larger economic headwinds at work, a little freed-up cash in one place may not be enough to overcome the global malaise. The WSJ article gives a perfect example of the complexity of markets right now:

Beef ‘O’ Brady’s, a restaurant chain based in Tampa, Fla., saw sales rise late last year thanks to cheaper gas, said Chief Executive Chris Elliott. But the momentum waned, especially in the factory-heavy Midwest. “The restaurant industry seems to be slowing,” he said, though lower prices for beef and other ingredients have “helped firm up” profit margins.
It may be too little too late.
As Mark Thornton noted a year ago, large drops in the oil price tend to accompany economic downturns. They don't cause the downturns of course, but there's good reason to be extra cautious before declaring that a dropping oil price is going to be followed by a boon to new consumer spending. It rarely happens that way. In fact, a big drop in the oil price is often followed by some very bad economic news.
Image source.
Author:

39 people were killed in school shootings in 2018 (one of the worst years.) In the same period, 900 children drowned, and 1,800 were murdered via child abuse.

Mises University Is the Fix!

MU changes lives for the better. Please support this magnificent week of education for the deserving students who seek real education beyond the traditional college route.