GET NEWS AND ARTICLES IN YOUR INBOXPrint
A
A
Home | Wire | If You Want Bigger Government, Vote Republican

One of the nice things about Bernie Sanders is that he seems to be honestly saying flat-out that he plans to massively increase the size of government.

The other candidates are probably lying either to themselves or to us  — or to both — about what they likely will do in office.

Of course, it's been so long since any president oversaw a federal government that actually cut spending, we'd have to go back to the immediate post-war years to remember any of that.

But, for decades, we've been told that a vote for the GOP  is a vote for "smaller government." This is repeated both by Republicans, who say it like it's a good thing, and by Democrats who still seem to think that the GOP is committed to cutting grandma's safety net.

If we look at federal spending, though, it's easy to see that the myth of the budget-cutting Republican president is just that: a myth.

First, let's look at federal outlays overall. To make our analysis more simple, I have adjusted this for inflation, using the CPI, for lack of anything better. All dollar amounts here are in millions of 2015 dollars: 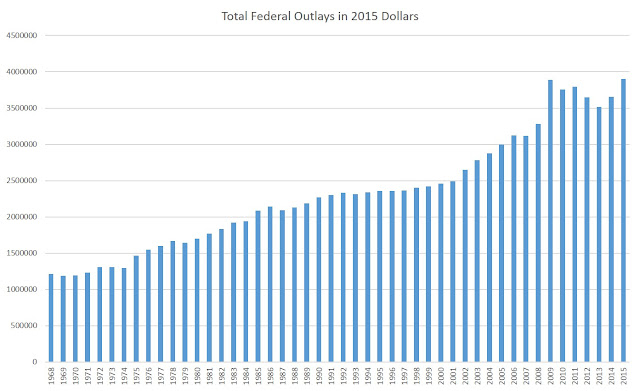 Just from eyeballing the graph, we can see a few things. Spending during the the 1980s and 2000s was more robust than it was during the 1990s. And, we can see that after an initial huge jump in 2009, federal spending has been somewhat flat — albeit at a huge level of spending.

We also find that — given the timing of fiscal years and the politics of the budget process — the huge increase in 2009 was initially engineered not by the Obama administration, but by the Bush administration.

If we break out spending by each presidential administration, we can see how much spending increased during each one's tenure: 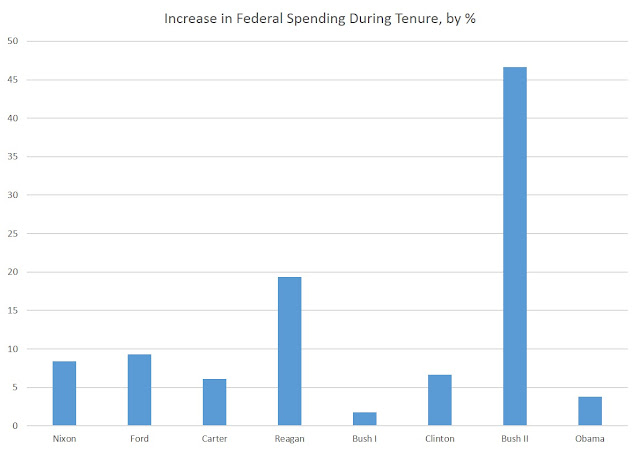 Because of the way that federal fiscal years work, we begin counting spending for a president in the fiscal year that begins after he's sworn in. For example, the periods we count for George H. W. Bush, are the fiscal years of 1990, 1991, 1992, and 1993. This is because fiscal years end on September 30 meaning that when Bush was elected in 1988, the 1988 fiscal year had already ended more than a month earlier. And, the 1989 fiscal year would end just eight months after Bush was sworn in, having already been debated and planned under Reagan during late 1988. Thus, it only makes sense to "blame" the 1989 fiscal year budget on Reagan, and the 1990 year on Bush.

Reagan and G.W. Bush Are the Worst Offenders

So, using this analysis, we do find that Bush I was the least-bad offender with federal spending increasing only 2 percent from 1990 through 1993. That's one in favor of the GOP claims for being against big government.

On the other hand, the top three worst offenders here are Republicans. As hard as it is to believe, there are still some people who think that Reagan cut the size of government, although Reagan was a big spender and laid the groundwork for the immense national debt we live with today.

During Reagan's tenure, counting FY 1982 to  FY 1989, federal spending increased 19 percent. And worst of all, George W. Bush oversaw an increase in federal spending of 46 percent during his tenure.

We can compare this to an increase of 7 percent under Clinton and 4 percent under Obama, although, we'll likely have to assign the blame for 2016 and 2017 budgets to Obama. However, even with all the coming increases in federal health care spending that we'll be able to thank Obama for, it's unlikely he'll be able to match the spending levels signed  into law by Bush II.

I know that some people will complain and say that the 2009 spending increases — which included the massive bailouts in the wake of the 2008 crisis — should be blamed on Obama. But, that would require us to forget that Bush II was a supporter of TARP, the auto bailouts, and immense amounts of fiscal "stimulus" in general that came in 2009. Even the most rudimentary Google search shows that Bush was very much in favor of the massive spending increases that came in 2009. Obama (and also surely McCain, had he won) would have done the same, but that doesn't change the fact that when given an opportunity to spend, the GOP grabs on to the opportunity with all its might.

We can fiddle with the measurements further, and including both election year and outgoing year for both. This means we'd be counting the increase from FY 2008 to FY 2009 and assigning that increase to Obama. Of course, we also then carry the same method to all other administrations. We find, though, that no single year upends our analysis, although by this other count, we do find the two parties are a bit more equal: 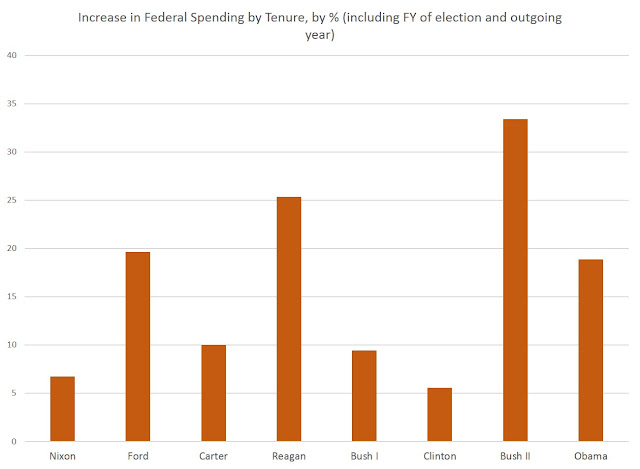 Source: US Office of Management and Budget

In this case, Obama's spending growth was nearly 19 percent, and Bush II is at 33 percent. With a year to go, Obama may still have a chance at rivaling Reagan in terms of spending, although, it's unlikely he can match Bush II's profligacy.

There are other ways we could measure this as well. What if we looked at how much the feds spent as a percentage of GDP under each president?

If we do that and average up the years for each president's tenure, we get this: 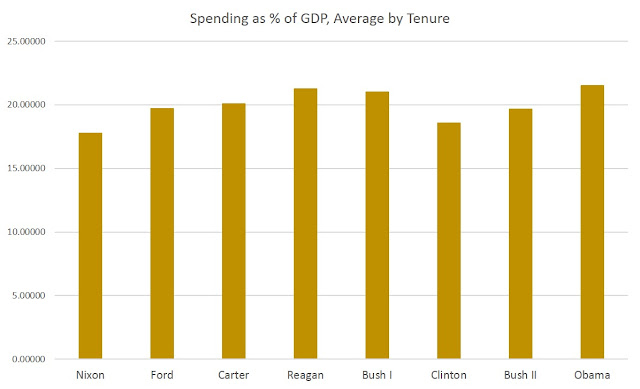 Source: US Office of Management and Budget

In this case, it looks like we finally nailed Obama. On the other hand, the three worst offenders here are Obama, Reagan, and Bush I. All three of them come in around 21 percent.

Those presidents who avoided major recessions during their tenures naturally score the best here, because in "good" years, growth in the private sector tends to soften the perceived effect of government spending in this data. On the other hand, there's not much variation here, overall, suggesting that by this measure, the two parties are pretty much the same. I guess the GOP's motto could be "Vote GOP, we only gave you two out of the top three big spenders!"

The graph above assigns 2009 to Bush. But if we use a measuring method that assigns 2009 to Obama (measuring similarly with other presidents) we don't see much of a difference. In this case, Obama bumps up to 22 percent, while Reagan and Bush I remain at 21 percent: 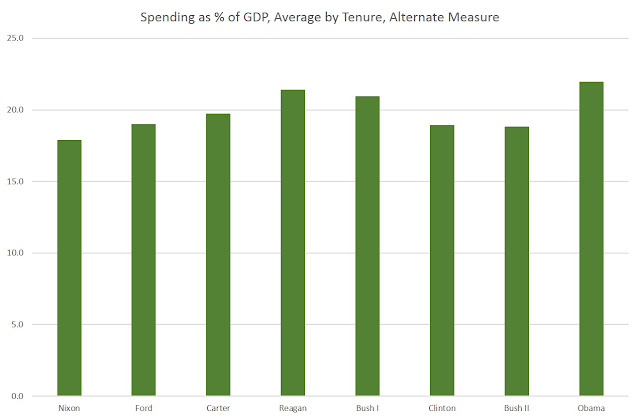 Basically, you can slice and dice the numbers any number of ways, but it's hard to see how we come up with a scenario that makes Republican presidents look like guardians of the fiscal purse who wield their veto pens with gusto. Indeed, depending on how you measure it, Obama, Reagan, and Bush II are largely all peas in a pod.

"But wait!" the GOP partisans will say. "It's all Congress's fault." If it weren't for those Dems in Congress, Republicans would have slashed budgets."

[See here for analysis of government growth, party majorities in Congress, and "gridlock."]

Even on its surface this is a weak argument since presidents have veto power, and never, to my knowledge, were any any of these budgets passed over the veto of a president, which would of course require a two-thirds majority in Congress. So, in essence, if the GOP ever has more than one-third a majority in either house of Congress, or if the party has the White House, it has veto power on the budget.

But, if the pro-GOP reasoning holds any water, then we should find that periods where the GOP had control of both Congress and the White House would have been a period of budget slashing.

In fact, it was during that period, in 2003, that the Bush administration dreamed up the idea of massively expanding Medicare to more heavily subsidize prescription drugs. It was the largest expansion of welfare since the Great Society, and it happened when the GOP had control of both the White House and the Congress. (Medicare is not self-financing, by the way. It pays out more than it takes in.)

We might also note that for six of Reagan's eight years, he enjoyed a Republican-controlled Senate (from 1981-1987), all the while racking up record-breaking deficits.

So, is a vote for the GOP a vote for less government spending, more fiscal restraint, and "personal responsibility." It's hard to see how one could possibly construe that from the historical record.

Another way to get GOP presidents off the hook, of course, is to blame the voters. That's not a terribly good political tactic, of course, but one would be correct to point out that a big reason the GOP doesn't slash budgets is because the voters don't want them to. Sure, many people claim to want smaller government, but as soon as the programs that benefit them directly, such as Social Security, Medicare, or military spending, are on the chopping block, the voters call their members of Congress, telling them to keep the money flowing.

This fact also illustrates how elections are useless in reforming the government if not preceded by an ideological change. The fact is that ideologically, Americans are greatly in favor of a big-spending government. The politicians who want to get elected are well aware of this, and act accordingly. If we want smaller government, we'd have to convince at least a sizable minority that it's a good thing. But until that changes, don't look for the next eight-year period to be much different from all the other ones in living memory.