How US States Compare to Foreign Countries in Size and GDP

The Individual member states of the EU are fortunate in that they have (so far) managed to retain their specific and separate identities to a point. While Europeans from larger countries like the UK, France, and Germany no doubt like to discount the necessity or importance of countries like Greece or Portugal, those countries at least each continue to function as states among equals, to a certain extent.

It is not so for the member states of the United States, where individual states have been all but totally subsumed into the whole that is the "United States."

We see this rhetorical aggregation all the time when people refer to EU member states as individual countries while steadfastly referring to "the United States" as a single entity in which it is assumed that the people, economies, and demographics are more or less equal throughout.

Yes, the US states are more culturally and politically unified than the EU member states, but as we've seen in terms of crime, poverty, income, and health, the local realities can differ significantly from state to state.

Aggregation has negative repercussions for public policy, of course, since it leads to national responses to what may be regional issues, or issues driven by even just a handful of metropolitan areas, as in the case of homicide in the US.

The other downside of this is that the aggregation of American states has led to a habit of treating smaller and medium-sized states as if they are insignificant.

In an international context, however, we find that the population sizes of many US states make them comparable to numerous foreign countries. Even more significant is the GDP of each state, which thanks to the high level of worker productivity in American states, places even smaller US states among medium-sized countries internationally. And, naturally, the larger states, such as Florida and New York, are among the largest economies in the world.

As an exercise in gaining perspective as to just how large some individual American states are, I've taken a look at how individual US states compare in terms of their population sizes and their total economies, in terms of GDP. 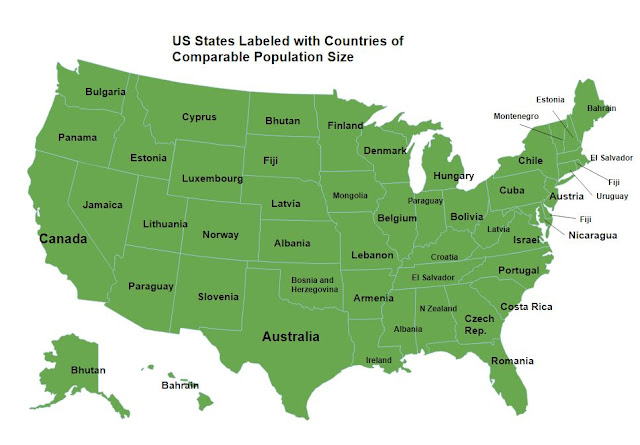 If just the West Coast and Rocky Mountain states broke off and formed their own country, the country would have 70 million people, and thus be larger than France, or larger than Canada, Australia, and New Zealand combined.

If the northeastern US broke off to form a country of New Jersey, New York, and New England,  it would have nearly 40 million people and be larger than Canada, Australia, Poland, and nearly as large as Argentina and Spain.

The real significance of American states, however, lies in their total productivity in terms of GDP. Many individual states are among the most productive places in the world.

For example, it is often noted that if California were an independent county, it would be the 7th largest economy on earth. That is true. California would be right behind France and ahead of Brazil were it its own country. 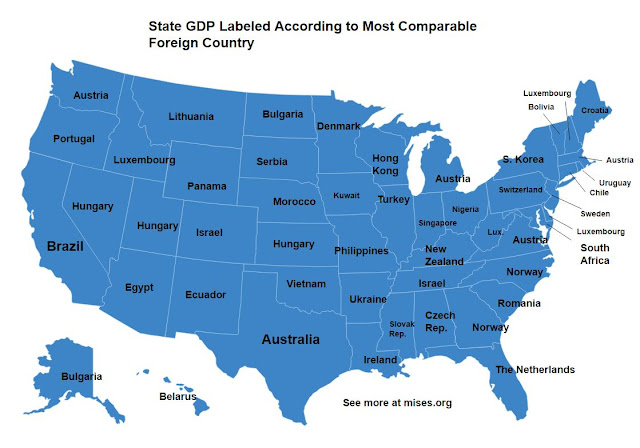 It is also worth noting that many of these states are producing large GDPs with much smaller populations that countries with comparable overall GDPs. This is because, thanks to the prevalence of highly productive capital in the US, American workers are far more productive than the workers in most other countries.

If we use a similar mapping method to look at per capita GDP, it looks like this: 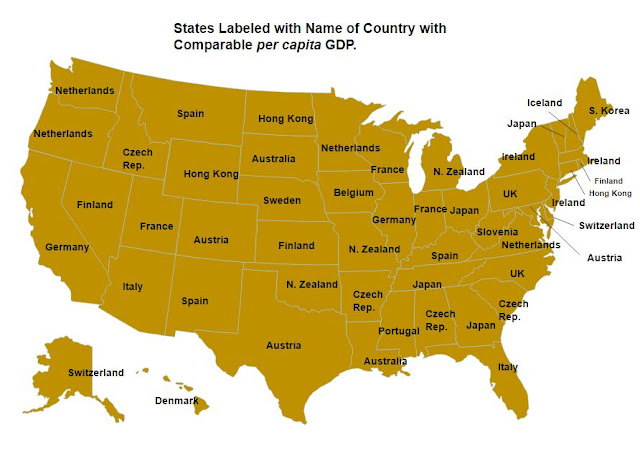 And what would "national" GDP look like if we broke the US into smaller nations? The economies would still be huge.

Our new hypothetical state composed of the West Coast and the Rocky Mountain region would be the fourth largest economy in the world and have a total GDP that falls between Japan (the third largest economy) and Germany, and well above the UK, France, Italy and Russia.

Similarly, if the northeast US (New York, New Jersey, and New England) were its own country, it would have a GDP about equal to the United Kingdom, which is itself the fifth largest economy in the world.

There are numerous implications here for public policy. First of all, the usual lack of international context often blinds us to the fact that individual states could easily fund their own individual welfare states without the need of a federal-level redistribution programs. This is significant because the justification for the New Deal, and for national welfare programs today, relies partially on an argument among policymakers that it is necessary for the federal government to redistribute wealth from the wealthier states to the poorer states. While I'm not in favor of welfare states, I'd be in favor of immediate decentralization of the American welfare state.

Even the poorest American states have the GDP necessary to fund welfare states similar to those in Southern and Eastern Europe. We're constantly being told how great and humane those are, so let's let cut the poorer states loose to do it on their own. The wealthier states, of course, can afford gold-plated Cadillac-level welfare states such as those we're told exist in Northern Europe.

And, of course, there are implications here for global geopolitics as well. If even the 11 Western states could form the fourth-largest economy in the world all by themselves, that reminds us that even pieces of the US would dwarf other global powers in terms of GDP, and thus military capability. That is, our hypothetical economy of the Western states would be twice the size of Russia's economy (about 4 tril compared to 1.8 tril).