How High Is The Risk of a Currency Crisis? | Mises Wire
Skip to main content

GET NEWS AND ARTICLES IN YOUR INBOXPrint
A
A
Home | Wire | How High Is The Risk of a Currency Crisis?

How High Is The Risk of a Currency Crisis?

“The reports of my death are greatly exaggerated”, quipped Mark Twain in response to a newspaper report that said he was on his deathbed. The same could be said about many fiat currencies. Whether we are looking at the US dollar, the euro, the Japanese yen or the British Pound: In the wake of the financial and economic crisis of 2008/2009, quite a few commentators painted a rather bleak future for them: high inflation, even hyperinflation, some even forecast their collapse. That did not happen. Instead, fiat money seems to be still in great demand. In the United States of America, for instance, peoples’ fiat money balances relative to incomes are at a record high.

How come? Central banks’ market manipulations have succeeded in fending off credit defaults on a grand scale: Policymakers have cut interest rates dramatically and injected new cash into the banking system. In retrospect, it is clear why these operations have prevented the debt pyramid from crashing down: 2008/2009 was a “credit crisis.” Investors were afraid that states, banks, consumers, and companies might no longer be able to afford their debt service — meanwhile, investors did not fear that inflation could erode the purchasing power of their currencies as evidenced by dropping inflation expectations in the crisis period.

Central banks can no doubt cope with a credit default scenario: As the monopoly producer of money, central banks can provide financially ailing borrowers with any amount deemed necessary to keep them afloat. In fact, the mere assurance on the part of central banks to bail out the financial system if needed suffices to calm down financial markets and encourages banks to refinance maturing debt and even extend new credit. Cheap and easy central bank funding prompted lenders and borrowers to jump right back into the credit market. The debt binge could go on.

Monetary policymakers’ unprecedented market interventions have not only prevented the global debt pyramid from crashing down, but they have also set into motion a renewed economic upswing (“boom”), which, however, has increased the world economy’s debt load significantly. From the end of 2007 to the third quarter of 2017, global debt has risen by almost 35 percentage points to 245 percent of global GDP. (To approximate Mark Twain’s words: Rumours of deleveraging in the global financial system are greatly exaggerated!) Particularly tricky is that the debt growth in the last decades has taken place in an environment of remarkably suppressed borrowing costs.

Maturing debt, as well as new debt, has been financed at very low interest rates. As a result, economic activity can be assumed to depend on the continuation of central banks’ expansionary monetary policy more than ever. If interest rates remain artificially low, the global boom stands a good chance to continue. However, if interest rates rise, and reach a level that is too high, boom will turn into bust. Against this background, the monetary policy that governments, banks, large and small companies, unions, workers, shareholders, and savers are calling for is quite apparent: “Keep it going, whatever it takes.”

As soon as economic activity starts to falter — whether due to central banks’ interest rate increases or a negative fall-out of political interventions (such as a “trade war”) — it is foreseeable that central banks will switch back to an “expansionary” policy of possibly even lower interest rates, more lending and money creation. It is pretty clear where this journey is taking us. Ludwig von Mises put it succinctly: “In the opinion of the public, more inflation and more credit expansion are the only remedies against the evils which inflation and credit expansion have brought about.”1

The effect of artificially lowered interest rates is doing great economic harm. It discourages savings, boosts consumption, and encourages investments — the kind of investments that would not have been undertaken had the interest rate not been manipulated downwards. Artificially suppressed borrowing costs make debt burdens of consumers, firms, and governments rise. The result is a distortion of the economies’ production and employment structure. To keep the boom going and prevent the bust, central banks push interest rates to ever lower levels, making sure that the credit and money supply keeps growing.

While such a monetary policy can prevent a credit crisis occasionally, it runs the risk to eventually resulting in a “currency crisis.” In a currency crisis, investors become worried that the purchasing power of their money will go down. A currency crisis would be a severe threat to the fiat money system, possibly even exceeding the drama of a credit crisis. This is because central banks would have to dispel peoples’ inflation concerns by tightening monetary policy for all eyes to see: hiking interest rates and reigning in credit and money supply growth. This would, of course, deal a massive blow to financially overstretched economies.

However, one should not prematurely jump to the conclusion that the next turmoil — and in a fiat money system the next crisis not a question of if but of when — will necessarily be a currency crisis. We may even witness yet another credit crisis. Who knows? The crucial point is peoples’ demand for money: As long as the demand for fiat currencies keeps pace with the growth in their supply, central banks can get away with their actions. For, in this case, any increase in the supply of fiat currency will be willingly held by the people, while price inflation of goods and asset prices remains well in check.

But is the demand for money really holding up? As mentioned earlier, in the US money holdings relative to GDP stand at a record level. At the same time, however, stock and housing prices have inflated quite considerably. This is evidence that consumers and firms have not merely kept their increased money holdings idle but have exchanged them to acquire assets. As money is increasingly offered against stocks and real estate, the prices of these goods increase, lowering the purchasing power of money — a development which is not well or not at all captured by official consumer price statistics. 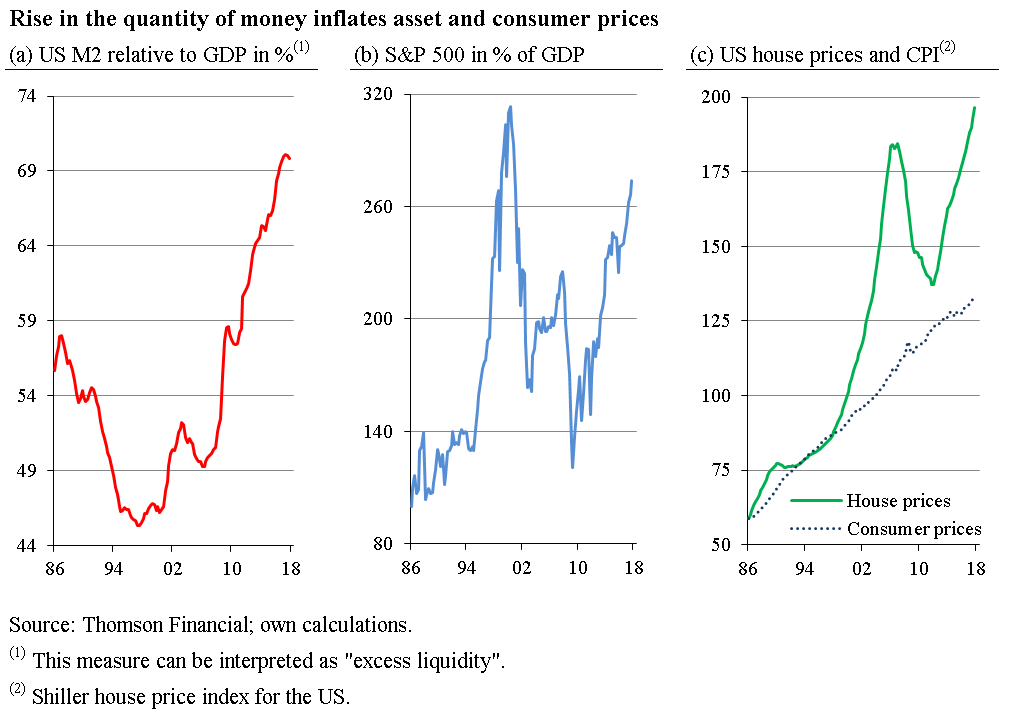 The financial crises 2000/2001 and 2008/2009 have resulted in increasingly inflationary monetary policies — as evidenced by the ongoing expansion of the quantity of money through credit expansion relative to output, provided by ever lower interest rates. The symptoms of these policies are rising consumer prices and, in particular, increasing asset prices such as stock and housing prices. It would be undoubtedly misleading to accept the widely spread narrative that price inflation is no longer a problem, or that current monetary policies would not cause inflation. The truth is that inflation is alive a kicking. How long can an inflation policy last? Mises answers:

Probably as long as people are convinced that the government, sooner or later, but certainly not too late, will stop printing money and thereby stop decreasing the value of each unit of money. When people no longer believe this, when they realize that the government will go on and on without any intention of stopping, then they begin to understand that prices tomorrow will be higher than they are today. Then they begin buying at any price, causing prices to go up to such heights that the monetary system breaks down.2

It does not have to end this way, though. Inflation is a man-made policy, and it can be put to a halt at any time. Unfortunately, the support for ending inflating the economies is still pretty small — from academia, politicians, and the public at large. Under this condition, central banks can be expected to continue unabashedly as long as the possibilities of inflation have not been fully exhausted. However, as price inflation may still go on for quite a while, accompanied by boom and bust, the risk of a currency crisis is growing by the day. The concern that it might be a currency crisis that could eventually bring down the fiat money system is by no means an exaggeration.

The Dangers Lurking behind a Digital Euro

As soon as cash has been pushed back or stripped away entirely, monetary policymakers can implement an uninhibited...