In absolute terms, the US dollar continues to be inflationary in ways rarely seen before 2009. That is, in a world of Quantitative Easing, the Fed just keeps on creating money in order to prop up domestic industries as well as US government debt. In late December, for example, the Fed continued with its buying spree of mortgage debt in order to continue to "enhance" housing markets, and thus the banks that invest in them. Moreover, as this Bloomberg article notes, the Fed is not exactly about to cut down on its enormous hoard of US government debt.

However, the other central banks of the world have given the Fed and the US federal government an enormous gift in the form of their even-more profligate monetary policy. Why it's true the Fed is pursuing a policy of ultra-low interest rates, much of the rest of the world is pursuing an even more ultra-low policy. 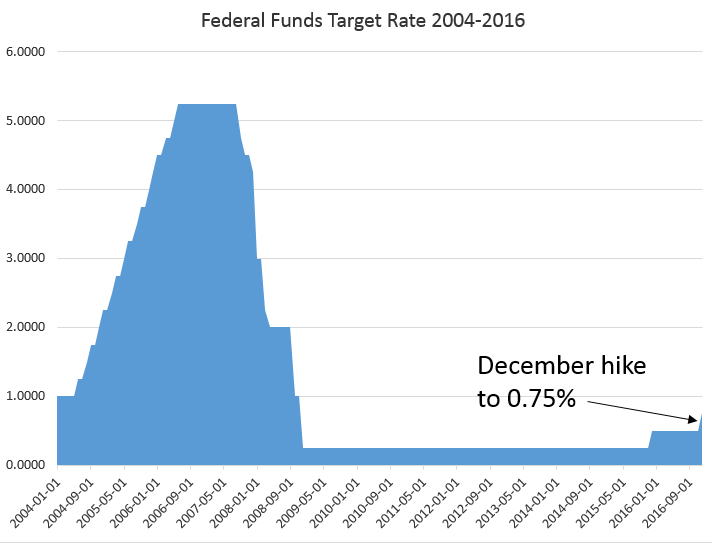 As an example, we need look no further than a general comparison of the the Fed with some of the world's major central banks. Yes, the Fed has kept rates below one percent for seven years now, but that's nothing special when compared to other central banks.  The Fed increased the target Federal Funds rate to 0.75 percent at its December meeting, marking the second increase in two years. This should strike us as extremely dovish monetary police. However, other central banks have been moving in the opposite direction. 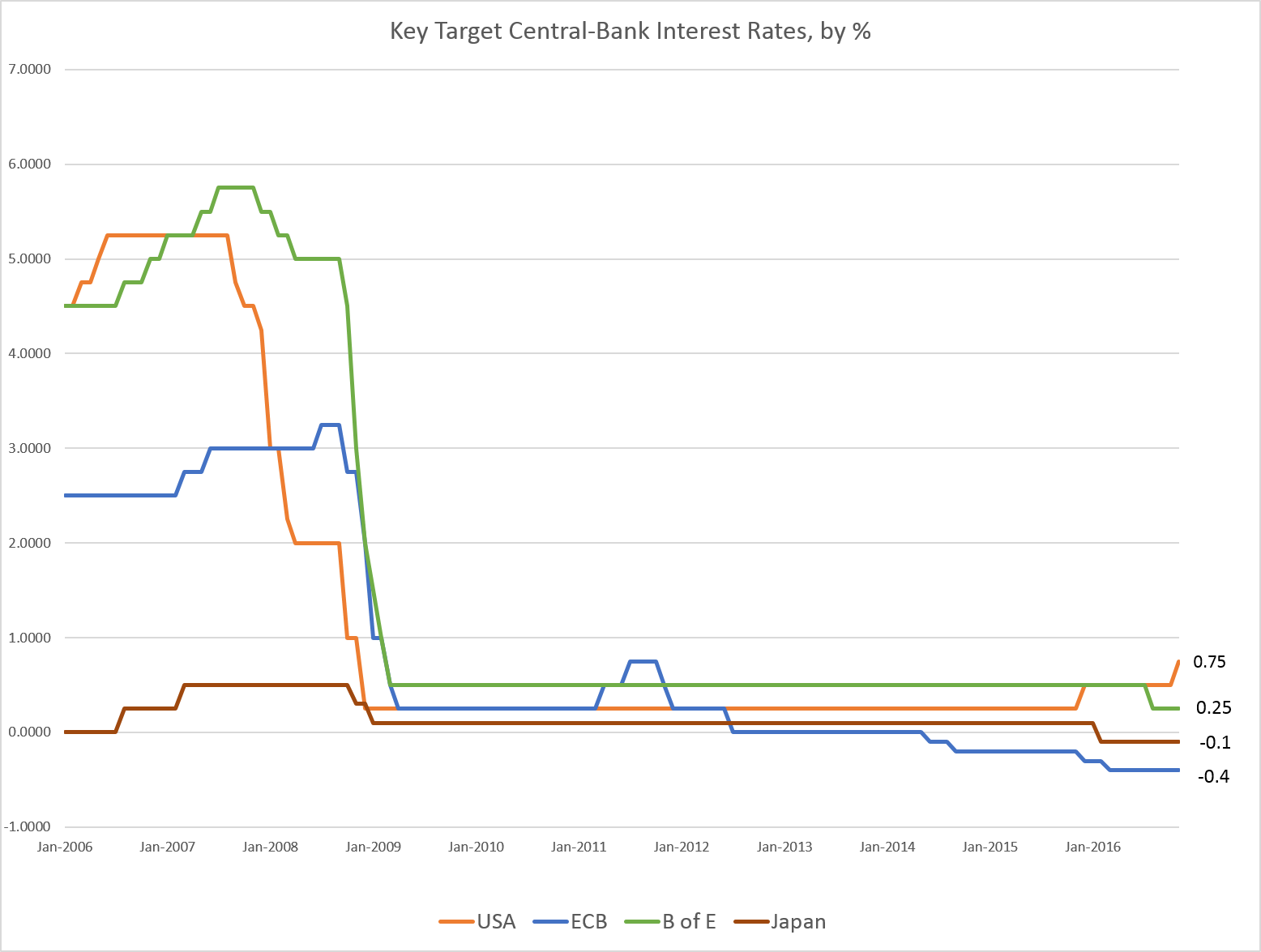 In August, for example, after nearly seven years at a target rate of 0.5 percent, the Bank of England cut its rate to 0.25 percent. Meanwhile, both Japan and the European Central bank continue to pursue target rates in negative territory:

Thus, as investors began to anticipate the Fed's hiking of the target rate from 0.5 percent to 0.75 percent, the dollar continues to climb against other currencies. Compared to these other major currencies — that is, in relative terms — the dollar looks rock-solid by comparison.

Moreover, as the Fed, for the past two years continues to hint that it's going to engage in repeated hikes any day now.

Unfortunately for strong-dollar advocates, however, these claims of repeated hikes have never been convincing. It was obviously true in 2016 following months of claims by the fed in late 2015 that they'll raise rates soon.

And, unless the current weak economy picks up steam in the Fed's metrics, it's likely the Fed will lose its nerve this year too.

As CNBC recently reported, in its explanation of why investors have tempered their love of the dollar:

The [December FOMC] minutes showed some conflict over the central bank’s pace of raising interest rates at the meeting, when the Fed raised interest rates for only the second time in the past decade. The Fed has said the pace of hikes would be “gradual,” though the minutes indicated that many Fed officials thought a measured pace of increases was under threat. The officials “pointed to a number of risks that, if realized, might call for a different path of policy than the currently expected,” the minutes read.

Although there weren’t big surprises in the minutes, “some investors may have gotten ahead of themselves in terms of” their predictions for the pace of future rate increases, said Colin Cieszynski, chief market strategist at CMC Markets. The Fed has penciled in three rate hikes in 2017, according to a plot of Fed members’ forecasts for rates.

If we look at the FOMC minutes, we note that "participants [in the FOMC discussion] emphasized the need to adjust the policy path as economic conditions evolved" which if course means that they may change their predictions of rate hikes at any moment, and they have little confidence that they won't. Participants also suggested that "uncertainty regarding fiscal and other economic policies had increased" and that "it was too early to know what changes in these policies would be implemented and how such changes might alter the economic outlook."

And perhaps most ominously was this: "Participants noted that, in the circumstances of heightened uncertainty, it was especially important that the Committee continue to underscore in its communications that monetary policy would continue to be set to promote attainment of the Committee's statutory objectives of maximum employment and price stability."

When the Fed invokes its dual mandate of maximizing employment and pursuing price stability, what the Fed is really emphasizing with the phrase is the part about maximizing employment. Thus, what is meant here is that the FOMC recognizes the Fed may decide to pursue a policy of additional economic stimulus at any moment, at which point the stability of the dollar — and the Fed's attempt to regain credibility by hiking rates — will go right out the window.

The larger context here is the continued unimpressive nature of the current "recovery." The language of the Fed's minutes, as well as those in most of its official publications, including the Beige Book, has been one of repeated reference to "moderate" growth. This has continued for years in spite of the fact that there's good reason to believe that incomes are in fact falling or stagnant as reflected in both tax revenue data and in survey data. The Fed fears that any hawkishness on interest rates could upset this very delicate apple cart.