Tags Media and CultureSocialismValue and Exchange

Sports are often defined as much by their controversies as they are their highlights. For college football, when debate is not focused on the proper way to crown national titles, the topic of player compensation is one of the most heated — and perhaps important — debates. It’s also one frequently plagued by bad economics, highlighting common misunderstandings about capital and labor.

College football is one of the most popular sports in the United States and, as such, is a very lucrative one. The average college team makes $29.5 million from its football program, while elite programs like the University of Georgia and University of Alabama, make over $80 million. This revenue is generated largely by lucrative television contracts, merchandise, and ticket sales, among other means. Since that amount of money tends to create headlines, it’s not surprising to see conversation turn to the players themselves, with some pundits putting the “fair-market value” of players at six-figures. They come to this figure by dividing the school’s football revenue by the number of scholarships each team is allowed to have. 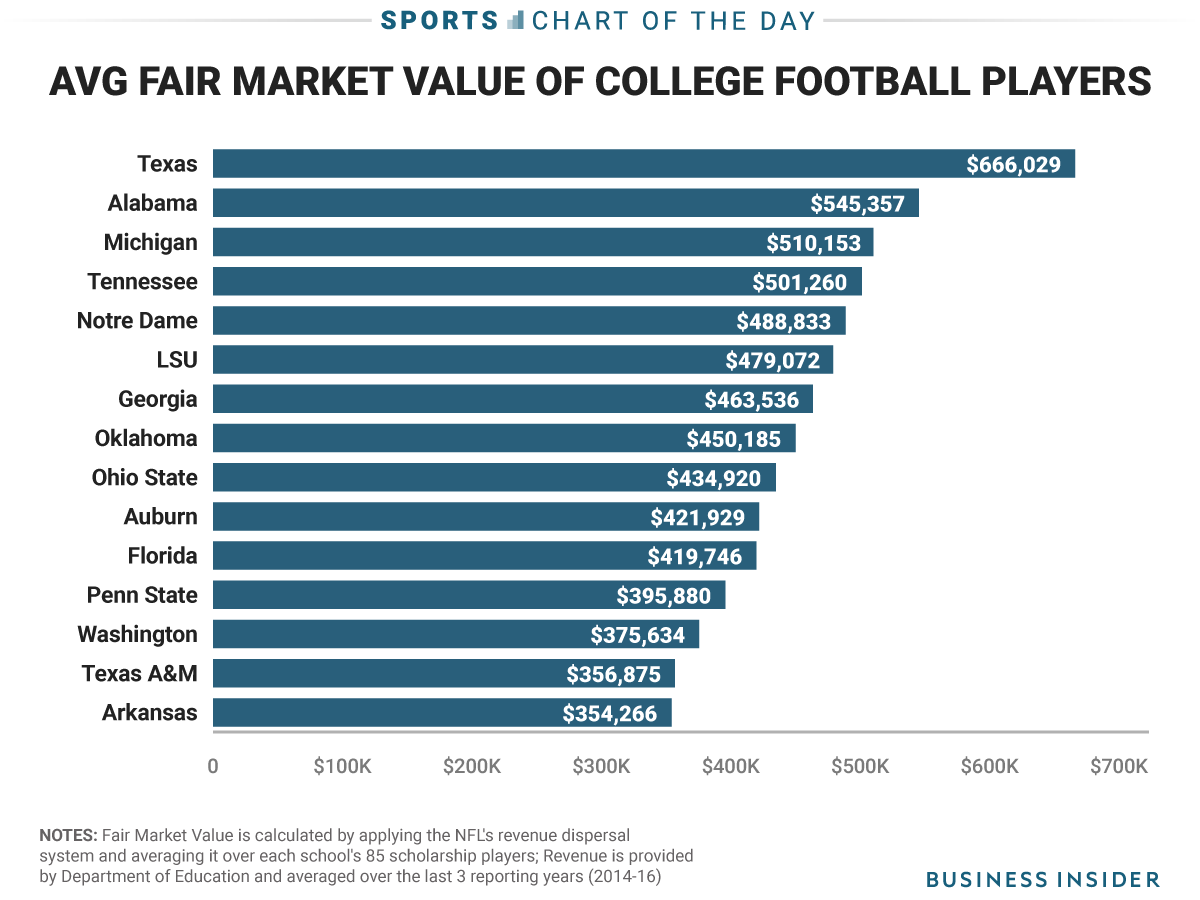 Of course this chart actually demonstrates one of the most misunderstood truths about college football: the revenue for teams is driven more by the logo, than the player.

This explains why the University of Texas, a program that hasn’t challenged for a national title in over a decade, is more valuable than Nick Sabin’s Crimson Tide. It’s also why the University of Central Florida will be ranked far lower in a list of football revenue than they were in the College Football Playoff Ranking.

This is not to take away from the contributions athletes make for their school. Their achievements on the field are a large part of what keeps fans’ passion for their team alive (and the dollars that come with it). It is, however, the capital investments made by the university that has given the players such a prominent platform to perform on. While there are certainly some players and performances that transcend the tribal mentality of college sports and earn a player the admiration of fans throughout the country, the overwhelming majority of people who buy a college player’s jersey, or a ticket to go see them play, does so because of the emotional attachment they have to the school — more than the player.

Of course this same dynamic is at play throughout the economy. The output and value of labor is a product of combining the technical skill of the worker with the capital investments made by the employer. Just as a factory workers output is dependent upon the machines and technology he uses on a daily basis, so do college athletes rely on the equipment, facilities, and television contracts to be able to play at a high level and be able to leverage that into a future professional career.

This is also not a defense of the NCAA or the status quo. Many of the rules and regulations the NCAA places on players, as well as their basic handling of college sports matters as a whole, is often absurd. I’m also not necessarily opposed to increasing the compensation of college football athletes, though it’s unlikely we’re going to see the government allowing schools to pay the football team more while neglecting women’s equestrian. Further, given that the majority of college football programs do not make enough money to support their athletic departments — with some even failing to break even on their own — there would be significant consequences for the sport. A better world would see a complete separation between government and universities.

It would also be great to see a non-collegiate alternative for high school players looking for a chance to become professional athletes. Would, however, such a developmental league, divorced from the pageantry and tradition of college athletes, ever be able to draw the ratings and revenue of tonight’s national title game?  Probably not.

Tickets for tonight’s game are selling for well over $2,000, and people aren’t paying just to see 20-something year old athletes play football. Especially for Georgia fans, this game is the payoff for years of investment — both financial and emotional — into a college program, and the special opportunity to see it rise to the top. It’s that investment that creates the value, in sports just as in the rest of the economy.

Missouri Tells the Feds: We Won't Enforce Your Gun Laws

The State of Missouri has adopted a new law mandating that state and local officials no longer assist in enforcing federal gun laws. The strategy has already been proven to work in states refusing to enforce federal marijuana laws.

Wages, Prices, and the Demand for Money: Keynes Got It All Wrong

When markets are mostly free, prices adjust freely and constantly to adapt to new realities. Yet Keynes failed to understand how market rigidities are caused by government intervention. He blamed markets instead.

The Fed Plans to Raise Interest Rates—Years from Now

“Mortgage companies have ramped up their purchases of government-backed mortgages in forbearance, and they are selling these loans back to investors at a profit.”

The Ratification Debate: A Standing Army vs. the Militias

Benjamin Rush was indecent enough to let slip the admission that the Constitution was a national government that ultimately eliminated the states. The other Federalists knew that it was not polite to admit this in public.

Government schools have always been tools of the regime for teaching state-approved ideology and culture. The rise...

Rothbard on the Betrayal of the American Right

Patrick Newman and Tho Bishop join the show to dissect The Betrayal of the American Right , which is both a...