Most early business cycle indicators suggest that the global economy is pretty much roaring ahead. Production and employment are rising. Firms keep investing and show decent profits. International trade is expanding. Credit is easy to obtain. Stock prices keep moving up to ever higher levels. All seems to be well. Or does it? Unfortunately, the economic upswing shows the devil’s footprints: central banks have set it in motion with their extremely low, and in some countries even negative, interest rate policy and rampant monetary expansion.

Artificially depressed borrowing costs are fueling a “boom.” Consumer loans are as cheap as ever before, seducing people to spend increasingly beyond their means. Low interest rates push down companies' cost of capital, encouraging additional, and in particular risky investments – they would not have entered into under "normal" interest rate conditions. Financially strained borrowers – in particular states and banks – can refinance their maturing debt load at extremely low interest rates and even take on new debt easily.

By no means less important is the fact that central banks have effectively spread a “safety net” under financial markets: Investors feel assured that monetary authorities will, in case things turning sour, step in and fend off any crisis. The central banks’ safety net has lowered investors' risk concern. Investors are willing to lend even to borrowers with relatively poor financial strength. Furthermore, it has suppressed risk premia in credit yields, having lowered firms’ cost of debt, which encourages them to run up their leverage to increase return on equity.

The boom stands and falls with persisting low interest rates. Higher interest rates make it increasingly difficult for borrowers to service their debt. If borrowers’ credit quality deteriorates, banks reign in their loan supply, putting even more pressure on struggling debtors. Also, higher interest rates cause asset prices – stock and real estate market prices in particular – to come down, putting the banking system under massive strain. In fact, higher rates have the potential to turn the boom into bust.

The US Federal Reserve (Fed), at the beginning of the 21st century, hiked interest rates, putting an end to the "New Economy Boom." Stock markets collapsed. As a reaction, the Fed delivered hefty interest rate cuts – and triggered an unprecedented credit boom that burst in 2007/2008 and developed into a global economic and financial crisis. Then, the Fed lowered interest rates to record low levels and run the printing press on a colossal scale to keep financially overstretched states and banks afloat. The question is: will it be different this time?

Sound economics tells us that the boom-and-bust cycle has one root cause: fiat money. The US dollars, euros, Japanese yen, Chinese renminbi or Swiss franc: They all represent fiat money. Central banks hold the fiat money production monopoly, and they increase the quantity of fiat money relentlessly through bank lending — through loans that are not backed by real savings. As mentioned above, the issuance of fiat money distorts market interest rates and prices, and thus plays havoc with peoples' savings, consumption, and investment decisions.

A destructive side effect of fiat money is that the economy’s level of debt keeps rising over time: The growth of credit keeps outpacing production gains. This is because in a fiat money regime, credit-financed investments fall short of their expected profitability, and credit-financed consumption is unproductive. Quite a few investments turn out to be “flops. The economy gets caught in a debt trap. Credit-financed consumption and government spending make it even worse. To be sure: it has become a problem on a global scale. 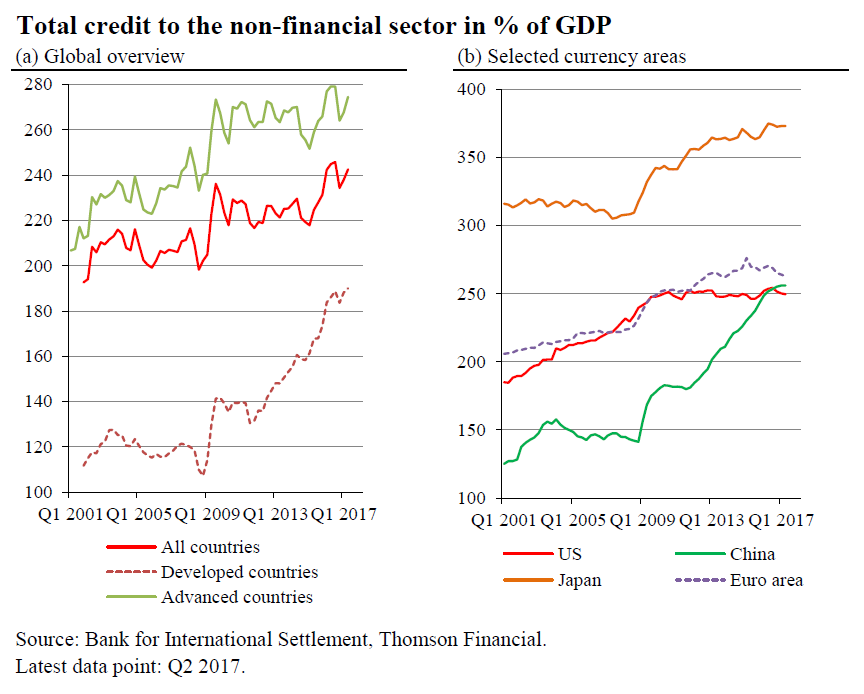 In an attempt to prevent the day of redemption, central banks slash interest rates to ever lower levels to keep the system going. Once interest rates are lowered, however, they typically cannot (for political reasons, I should hasten to say) be brought back to pre-crisis levels – as this would make the debt pyramid, and with it the economy and the financial system, come crashing down. It is this economic insight that explains why interest rates show a marked trend decline over the last decades in all countries that have adopted fiat money.

The Fed, the world leading central bank, is on an interest rate hiking spree, though. Since December 2015 it has increased its Federal Funds Rate from 0.0 – 0.25 to 1.25 – 1.50 percent in December 2017. So far, higher rates have not done any damage to the US or international business cycle, or at least so it seems. How high can the US interest rate go without bringing the boom to its knees? To answer this question, we would need to know the height of the “natural interest rate” level. What does that mean?

You may hope that the Fed, and all the other central banks, have learned their lesson and will, this time, master the delicate balancing act of bringing the interest rate to the “right” level: the level where the economy is doing just fine. Such hope, however, is built on sand. The reason is not just a lack of knowledge on the part of policymakers: they do not, and cannot, know where the level of the natural rate of interest is and set its interest rate accordingly. The real reason is that the natural interest rate level is a no-go area for central banks.

We are thus left with two scenarios. First: The central banks will succeed in keeping the boom going – which is the case if and when they keep their interest rates at artificially suppressed levels. This, however, will come at the high price of growing malinvestment, speculative bubbles, and – due to a relentlessly increasing quantity of money – an ongoing loss of purchasing power of money. Second: Central banks will, by raising interest rates “too much”, put an end to the boom and turn it into bust.

Even if the first scenario unfolds, however, the boom can be expected to come to an end eventually – as it is relatively unlikely that there will be a continuous sequence of "favorable conditions" (such as, say, positive productivity shocks) coming to the rescue, postponing the boom from turning into bust forever. To put it differently: In a fiat money regime, the scenario that the boom turns into bust is not a question of if but of when. This is an insight which Ludwig von Mises (1881 – 1973) put succinctly:

“There is no means of avoiding the final collapse of a boom brought about by [circulation-] credit expansion. The alternative is only whether the crisis should come sooner as the result of a voluntary abandonment of further credit expansion, or later as a final and total catastrophe of the currency system involved.”1

It is impossible to predict when business will deteriorate with a fair degree of precision. There is no formula according to which the timing of the boom turning into bust could be calculated. In view of political attempts to keep the boom going, however, the probability of a continuation of the inflationary boom seems to be higher than the probability of an immediate deflationary bust – as central banks appear to be determined to “fight” any new crisis with even lower interest rates and even more money printing, through which currencies will be debased.

The world's regimes have long been devoted to regulating every aspect of "health" in accordance with what central planners want. The covid panic offered them an opportunity to greatly expand these powers.

The deficit for the year is pushing $2 trillion. And we still have five months to go until the end of the fiscal year. Only during World War II were the deficits so huge in relation to GDP. Meanwhile, the Fed continues to print money to buy more Federal debt.

By mid March—when barely 12 percent of the population had been vaccinated—total excess mortality was back within 1 percent of 2019 levels. In other words, the number of deaths in the US is collapsing back to where it was before the official start of the pandemic.

3 Ways the Tech Oligarchs' New Subsidy Is Ripping You Off

When it comes to the oligarchs' new semiconductor subsidy scheme, the real cost in terms of economic distortions, lost welfare, and harm to competitors, is quite real and beyond the dollar amounts we see in the subsidy itself.

Why Fungibility Is Important in Understanding Money and Crypto

One of the most in-demand aspects of physical cash is that it is totally fungible. Every dollar is the same as every dollar. But cryptocurrencies can leave a digital trail which may lead to later problems in fungibility.

The Dangers Lurking behind a Digital Euro

As soon as cash has been pushed back or stripped away entirely, monetary policymakers can implement an uninhibited...