California Wildfires Don’t Have to be the New Normal

To call them devastating is an understatement.

There have been 8,771 wildfires recorded in Northern and Southern California this year, so far, burning an equivalent of 3,346 square miles. The economic costs, increasing by the day, are now over $13 billion, a figure that will double once the bills from SoCal come in.

The greatest costs are the human ones, especially the loss of human life.

There are, of course, certain characteristics about California that make wildfires more probable there than would be the case in South Dakota, but none of them mean that annual wildfires are inevitable. And yet, that is the message we receive from the life-is-hard-therefore-we-need-government crowd.

Consider this excerpt from the Los Angeles Times story:

So how did the Thomas fire become such a monster? Heavy winds are one factor. But another is the thick brush that has not burned in decades, providing fuel.

“The fuels in there are thick and they're dead, so they're very receptive to fire,” said Steve Swindle, spokesman for the Ventura County Fire Department.

The fuel can spread the fire even when winds die down.

“Since it’s so dry out there, it doesn’t take much in the way of winds to create those critical fire weather conditions,” said Robbie Munroe, a meteorologist with the National Weather Service. We’ll see wind gusts in that ... area between 20 and 35 mph, maybe a few mountain sites might see up to about 40, but that’s the most we’re expecting right now.”

When the fire shifted toward the coast Sunday morning, Monroe said winds were not necessarily the driver.

“Wind was probably not the biggest factor last night to this morning — it’s probably more the complex terrain, very dry and possibly widespread fuels for the fire and the fact that it’s a pretty large and ongoing fire,” he said. “The light offshore winds are certainly a factor, but not as important as they’ve been, say, earlier in the week when we saw much stronger winds over the fire.”

So thick brush, tons of dry fuel, and windy conditions are the problem. This is why California’s insufferable governor, Jerry Brown, said this week that these kinds of disasters are part of “the new normal” for his state, and that residents should plan around them from now on. Following the Rahm Emanuel rule — you never want a serious crisis to go to waste — Brown seems almost giddy about the fires’ role in promoting his brand of climate change statism.

If Californians accept this argument, then they truly deserve the government they have and the disasters that come with it, and not just wildfires. But key to understanding the fires is to understand the role of property rights institutions in their creation. Perhaps wildfires in California are inevitable, but there is no reason why they should be the regular events they have become.

Consider the fact that in the American South, which is much more heavily forested than California, such fires are unheard of. Might this have something to do with the percentage of land in each region that is publicly owned and managed compared to the land that is privately owned and managed?

When land is privately owned, owners have strong incentives to maintain its long-term value. In the South, this means that owners monitor their land for concentrations of deadwood that could spark fires. Especially during dry seasons, controlled burns are very common in the South as the buildup of tinder and other forms of fuel are eliminated so they are less susceptible to lightning strikes or other events that could cause them to burn out of control. 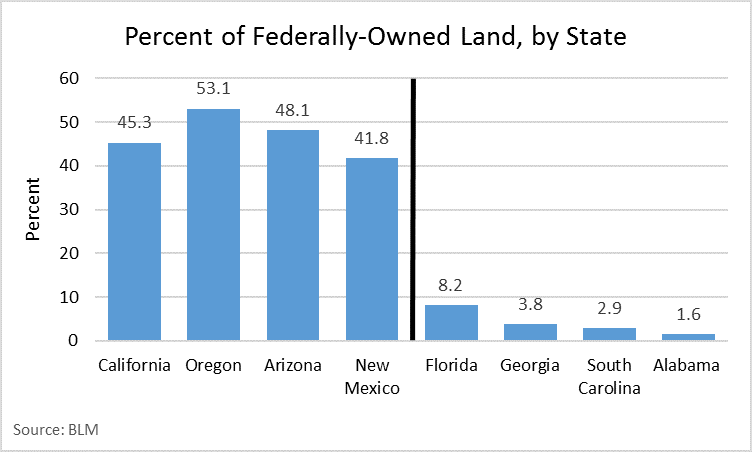 This is what’s lacking in California, and indeed, all the western states in which a vast majority of the land is owned and managed by federal and state government. When this happens, the de facto caretakers of the land are state and federal wildlife employees, to say nothing of the U.S. Forest Service bureaucrats, who just don’t have the same incentives to manage land as carefully as private owners. They don’t own the land. They stand to receive no significant benefit from its being well managed. If they poorly manage it and let fuel build up to unsafe levels, they still keep their jobs. When wildfires break out, the perverse benefit these bureaus receive is increased funding and budgets.

What’s truly inevitable about this story are the highly predictive outcomes associated with the different property rights institutions existing in the West and the South. The result: Wildfires are now regular events in California, as well as their accompanying loss of human life and destruction of property, while in the South, they aren’t.

These outcomes prove Mises’ aphorism that there can never be too much of a good theory. And society excludes good theory from informing property rights institutions at its own peril.

So California needs to strengthen these institutions, especially with respect to its fire-prone land, which should be sold to individuals or firms that would stand to benefit from its being well-managed and to internalize costs when it isn’t. Absent direct ownership, why can’t every party facing threats from wildfires in California — homeowners and businesses — create and co-own a private nonprofit corporation that exists primarily to monitor the land for wildfire threats? That such an entity doesn’t currently exist in California reflects the political strength of the federal and state agencies tasked with managing public lands and of firefighter unions that would be threatened from such market innovations.

Like selling mineral rights to a mining company, the government could sell dry tinder rights to this nonprofit firm, which would then manage tinder and other fuels to safe levels. You can be sure that such an entity would be cheaper to finance than all the agencies currently tasked with managing fire-prone land.

What’s more, shares of ownership would go to those parties with the greatest stake in minimizing fire hazards that pose direct threats to their own property. The resulting incentive structure would differ markedly from the one faced today by California’s Natural Resources Agency’s tenured employees.

Perhaps such an entity makes too much sense for California. But until Californians realize the importance of institutional arrangement’s in normalizing disasters, they might have to get used to a future resembling its dystopian Hollywood movies.

How Long Will This Recession Last?

Bottom line, it’s a recession at the moment; whether it gets worse depends on inflation, and policymakers goofing around whistling past graveyards should give anyone pause.