Brexit Shows Why the US Income Tax Is So Bad

Following the success of the vote for Britain to withdraw from the European Union, many Americans renewed talk of the possibility of American states seceding from the United States.

On the other hand, thanks to the regime of direct taxation (primarily the federal income tax) used in the United States that transition to independence would be far more difficult than it would be for a country that withdraws from the European Union.

One major factor that eases the secession of member states in the EU is the fact that European Union is not primarily funded by direct taxes on Europeans, but mostly by remittances from member states.

According to EU budget documents, funding sources for the EU include "contributions from member countries, import duties on products from outside the EU and fines imposed when businesses fail to comply with EU rules."

This includes "a small percentage of gross national income (usually around 0.7%) contributed by all EU countries — the largest source of budget revenue."

Although the EU enjoys vast regulatory legal authority at this point, the overall budget of the EU is quite small compared to that of its member states, especially the large ones.

So, if a member state wishes to withdraw from the EU, the member state will stop contributing to the EU budget, but individual citizens of that country will not see a large change in their tax relationship with the EU. After all, their tax dollars primarily went to the national government first, before being sent up to Brussels.

The US Federal Government Collects Most Taxes Directly from Taxpayers

In the United States, the situation is quite different. US taxpayers' primary tax burden in most cases is with the central government, and when a US taxpayer pays his or her income tax, those funds go directly to the federal government. Were the US structure closer to that of a confederation, Americans would pay taxes to their respective state governments, and then those state governments would hand over a portion of that to Washington, DC in accordance with a formula established by Congress ahead of time.

Moreover, in another departure from the EU model, the budget of the United States government dwarfs that of any state in the Union with revenues flowing into DC totaling up to numbers vastly exceeding revenues for any state.

For example, in Texas in 2014, total tax collections by the state amounted to about $55 billion. Total taxes collected by the IRS from Texas residents in 2014, however, was $265 billion. In recent years, Texas is a "break even state" which means federal taxes paid by Texans roughly equals federal dollars spent in Texas. However, it is significant that these funds went to Washington, DC first, and then were spent in Texas at the discretion of the federal government.

Even worse, some states such as Minnesota and Ohio are "net taxpayer" states, which means they pay even more in federal taxes than is returned to the state in the form of federal spending. Thanks to direct taxation, though, these states must go on subsidizing people and activities in other states with little say over what happens to that revenue once collected by the IRS.

Nationwide, we also see how much more powerful the US government is in terms of tax collection than are the states. For the nation as a whole, IRS tax collection was $3 trillion in 2014. Total revenues that went to state governments, however, totaled $865 billion. 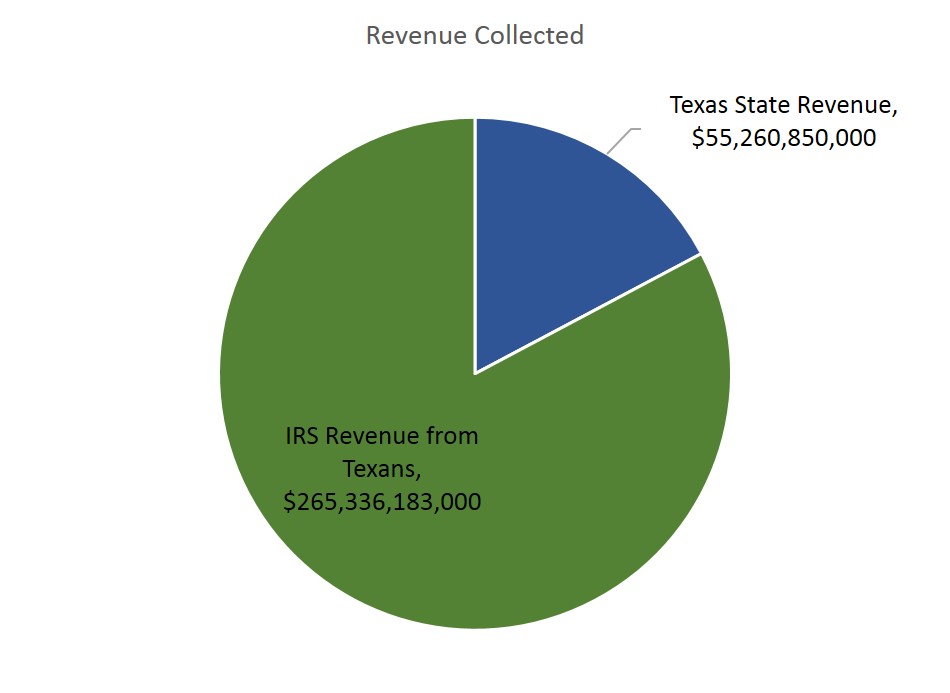 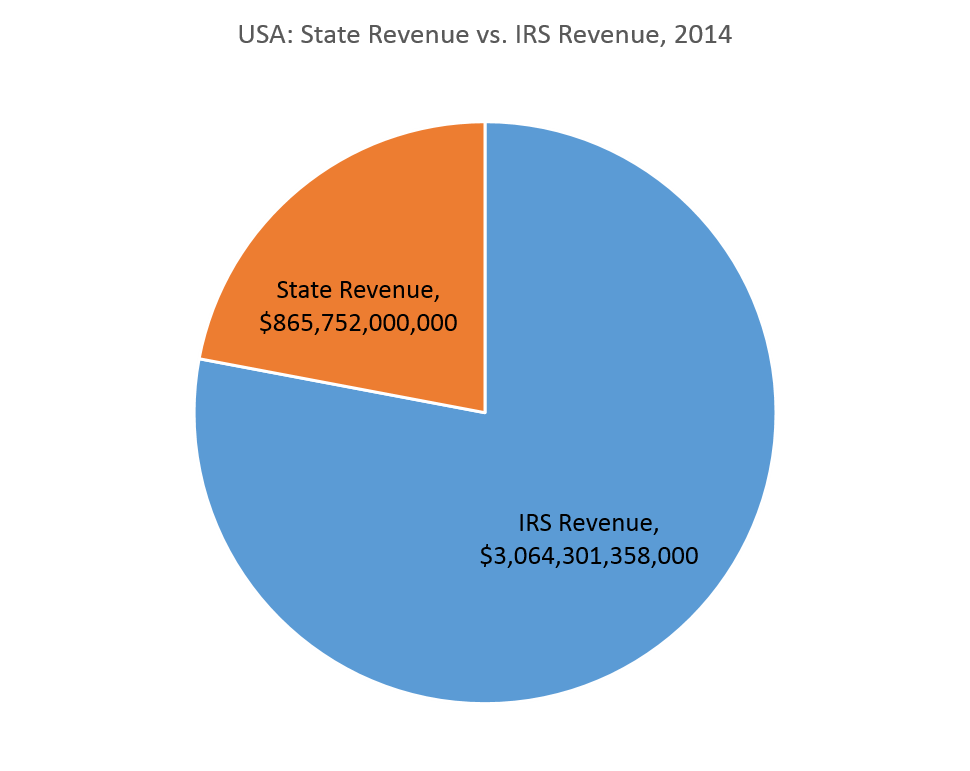 In our Texas example, total tax revenues collected from Texas taxpayers totals $320.5 billion. Of that, nearly 83 percent goes straight to DC, and only 17 percent goes to the state government.

For any state that wishes to secede, this presents a serious challenge. Naturally, few states will find it practical to secede without first finding a way to keep those IRS tax revenues inside the state. But, since the IRS enforces its own rules directly without relying on states for enforcement or collection, taxpayers will be afraid to stop paying federal taxes even if the Texas government were to declare itself independent. Texas would first have to convince taxpayers that the independence movement will be successful, and Texans will never again be subject to old US federal tax law. Naturally, in response, the US could vow to arrest any Texan who sets foot on US soil for tax evasion, or to refuse entry to any Texan who has stopped paying US federal taxes. If we consider how the US hunts down "tax evaders" who haven't even lived in the US in decades, this level of vindictiveness on the part of the US is hardly beyond the realm of possibility.

Similarly, any attempt by Texas to distance itself from Washington that falls short of outright secession can be met with federal threats to cut off (or reduce) federal spending in Texas. Thus, if Texas attempted to nullify or ignore federal laws on any matter, the feds could simply threaten to end or reduce military spending (for example)  in the state. Since the federal government has first dibs on the wealth of Texans, this would be fairy easy to do. The Texans would still have to pay taxes to Washington, but Washington could elect to stop giving some of it back.

In a true confederation of voluntary member states, member states can unilaterally elect to cease paying contributions toward the central government. This is what the UK will do if it legally withdraws from the EU. Thus, if US states were responsible for collecting taxes and then sending a portion of revenues to Washington, this would simplify matters considerably, and the decision to pay into a confederation would depend on the member states agreeing to do so.

In the US however, which is clearly no longer in practice a membership-based confederation of any sort, the "member" states have little say over how much their residents pay to the central government.

Not only does direct taxation make secession far more difficult, but it greatly enhances the ability of the central government to intimidate and control the states as well.

What Happens When the Feds Get a State's Tax Money First

As an example, we can consider the ongoing legal controversy in Utah over the control of public lands in that state (covered here at mises.org). The state has legally attempted to gain greater control of federal lands through the courts, but direct taxation in practice helps ensure continued federal control.

Say, for example, that Utah state agents showed up at federal lands, kicked out the federal agents, and then proceeded to administer these lands as state lands. Utah will immediately face a problem. It is costly to administer public lands in terms of road maintenance, fire suppression, and other expenses. In fact:

Those who think the transfer would be too costly cite a study of Utah’s public lands which claims that a transfer of federal lands to the Utah government would cost the state’s economy $280 million annually, plus $150 million in federal salaries.

Utah, of course, is filled with highly productive workers with a high median income and the State of Utah could easily afford to cover these costs, were the Utah state government able to actually control tax revenue collected from Utah residents. The problem Utah faces is that most tax revenue that comes from Utah taxpayers goes straight to Washington, DC. Thus, if Utah were to seize federal lands, the federal government could easily retaliate by saying, "Fine, you get the lands, but you'll never get any federal funds to help you administer those lands. We'll just keep that money instead." Meanwhile, fearing fines and imprisonment for tax evasion, Utah taxpayers will continue to pay the usual federal taxes, knowing full well that less of it will now be spent in Utah. Obviously, this is a large disincentive to any Utah government (and the taxpayers themselves) considering running afoul of federal laws.

Is secession and nullification still possible under these circumstances? Of course it remains possible, but such lopsided federal control over tax revenues makes both phenomena far less probable. One of the greatest impediments to secession and nullification today lies in the fact that so many states receive large amounts of federal funding either in military funding or social benefits, made possible by direct taxation. Were these federal spending programs to ever significantly decrease or dry up — say, as a result of a lowered federal spending resulting from bankruptcy or acute increases in debt service on the national debt — then the secession landscape would look very different.

Savings Are the Foundation of Economic Growth

If people are to demand things in the market, people must first produce things. This production allows for savings, and ultimately, for economic growth.

How can anyone get away with controlling a state? Why would others put up with such an institution?

We should be extremely concerned about the short and diminishing impact of monster stimulus plans.

If every new virus or variation warrants shutdowns or new vaccines, we will face an unending dystopian hellscape of state intervention in our medical decisions.

It wasn’t "fascism" or "Russia" that normalized lockdowns, mandates, and massive whirlwind profits to politically connected cronies in the West—it was the alleged defenders of "liberal democracy."