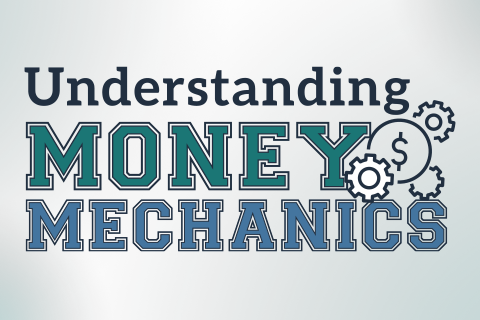 The Understanding Money Mechanics series by Robert P. Murphy, is a comprehensive overview of the theory, history, and practice of money and banking, with a focus on the United States.

The full book is available at the Mises Store, and free on mises.org in html and pdf versions. Also available on Amazon.

[The table of contents below is from an earlier serialized version of the book]:

Lays out the scope and purpose of the booklet, and the schedule for release.

PART I: THEORY AND HISTORY

Chapter 2: The Theory and Brief History of Money and Banking

Covers Menger’s theory of the origin of money, and briefly mentions the anthropological critique (David Graeber). Explains the attributes of a desirable commodity money. Gives a standard history of the origin and development of modern banking, including some important court rulings. Mentions the history of private mints.

Chapter 3: A Brief History of the Gold Standard, with a Focus on the United States

Explains the US dollar’s tie to the precious metals over time, and some of the major controversies such as William Jennings Bryan’s “Cross of Gold” speech. Explains the operation of the classical gold standard and how it evolved during the World Wars, Bretton Woods, and, finally, the Nixon Shock.

Chapter 4: The History and Structure of the Federal Reserve System

Explains the unusual circumstances of the Fed’s origin, and mentions “conspiracy theory” treatments. Explains how power was consolidated in DC and away from Reserve Banks under FDR, and how the Fed’s mandate again altered in 1977. Concludes with an overview of the modern organization of the Fed, including the number of member banks, how the Federal Open Market Committee (FOMC) is selected, how the chairman is picked, etc.

Chapter 6: Beyond the Fed: “Shadow Banking” and the Global Market for Dollars

Defines the concept of shadow banking and gives a brief history, plus some stats for context. Defines things like “eurodollar,” LIBOR, etc. Explains the Bank of International Settlements (BIS) and the Basel Accords. Explain the basics of the repo market and the difference between capital requirements and reserve requirements.

Chapter 8: The Fed’s Policies since the 2020 Coronavirus Panic

Explains some of the major changes implemented in the wake of the pandemic, such as the abolition of reserve requirements, unprecedented asset purchases, and a redefinition of M1.

Lays out the basics of Austrian boom-bust theory. Explains that Mises developed it in The Theory of Money and Credit, in which he also said that fiat money was a theoretical possibility (!); this means that Mises clearly didn’t think that boom-bust was restricted to fiat money regimes. Using Mises’s analogy of a master builder running out of bricks, illustrates the difference between “overinvestment” and “malinvestment” theories, and also why continued pump-priming a bad idea.

Starts with Friedman’s measures of money stock and (consumer price) inflation, and summarizes cases of hyperinflation (Civil War, Weimar Republic, Zimbabwe, Venezuela). Documents change in how the word “inflation” is used, and explains how “currency boards” are used by some countries to limit the ravages of inflation. Explains the famous equation of exchange (MV = PQ) and why Mises and Rothbard didn’t like it.

Documents this surprisingly good forecasting tool, and then shows that it fits quite nicely within the Austrian framework.

Chapter 12: The Fed and the Housing Bubble/Bust

Shows that the textbook Austrian story fits the empirical facts of the housing boom/bust.

Chapter 13: Does Textbook Explanation Get Money and Banking Backwards?

Is the “textbook” description (covered in chapter 5 above) actually wrong? Deals with the (relatively) recent claims—coming not just from internet critics but also a major UK institution—that bank lending is not reserve constrained. Also addresses that idea that “lending creates deposits” rather than vice versa, as the orthodox economists claim.

Explains that some (including the present author) made erroneous warnings about (consumer price) inflation when QE was first implemented, and asks whether this invalidates the textbook treatment. Is it true that QE was “just an asset swap” and “wasn’t money printing”?

Chapter 15: The Keynesians on the Cause of, and Cure for, Depression

Explains the Keynesian perspective. Contrasts Austrians and Keynesians on the Great Depression. Explains the “liquidity trap” and why Keynesians think Say’s law works in the special case of “full employment” but that we need a general theory of employment, etc.

Gives a brief history of the historical battles between original monetarists and Keynesians (Friedman/Phelps on the Phillips curve, the Robert Lucas critique, and rational expectations framework). Then explains how people like Scott Sumner updated Friedman’s monetarism and now offer the goal of “level targeting” of stable NGDP growth, which some Austrians argue is similar to Hayek’s approach.

Chapter 17: Bitcoin and the Theory of Money

Applies the earlier theoretical framework to Bitcoin, to answer questions such as “Is it money?” Addresses the challenge that Bitcoin violates Mises’s regression theorem.