GET NEWS AND ARTICLES IN YOUR INBOXPrint
A
A
Home | Mises Library | Speech: Free and Unfree 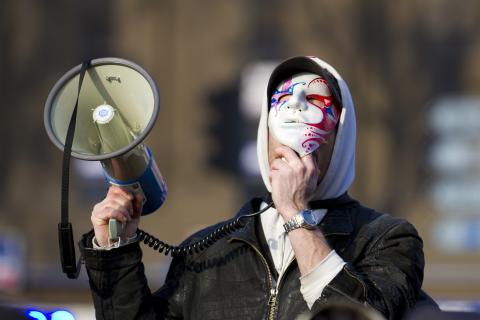 When Atlanta Braves pitcher John Rocker ignited controversy with his now-infamous remarks to Sports Illustrated, a "national dialogue" of sorts sprang up on the airwaves and the internet. While most of the exchange centered around the wisdom of Major League Baseball’s Soviet-style decision to send Rocker to a psychiatrist, more than one commentator made reference to a supposed violation of the disgraced ball player’s First Amendment rights.

Americans claim to revere rights of free speech and freedom of the press, as guaranteed by the Bill of Rights, yet there is more disinformation regarding the First Amendment than nearly anything else involving the U.S. Constitution. Unfortunately, the constitutional amendment that was aimed precisely at confining the power of the state has been turned into a tool of expanding government--and suppressing legitimate free speech at the same time.

This is a very serious charge and one that will be dismissed by most people, and especially by many civil libertarians who claim to be passionate defenders of the freedoms of speech. Anything that keeps authorities, government or private, from imposing prior restraint upon either the spoken or written word is protection of free speech, according to the modern speech mavens.

Unfortunately, many of those same "civil libertarians" not only fail to acknowledge the necessity of private property rights which are the real basis of freedom of speech and freedom of the press, but also promote attacks upon this vital institution in the name of liberty.

We first turn to the conventional view of free speech, the opinion that is repeated in the nation’s media outlets and from pulpit and classroom alike. This view states that free speech is primarily political in nature and should be both protected and promoted by those in power. In other words, if someone wishes to voice a political opinion, under no circumstances should that opinion be suppressed, be it in a private or public setting. Likewise, government should be required to make sure that this opinion, whatever it might be, is given a platform for expression to be financed, in part, by those in disagreement with the opinion.

For example, when Nazi sympathizers demanded to march in Skokie, Illinois, in the 1970s, the American Civil Liberties Union successfully used to courts to force approval after officials of the municipality, which has a large number of Jewish survivors of the Holocaust, refused to grant the demonstrators a parade permit. While many civil libertarians applauded the ACLU’s actions as properly standing up for free speech, in fact the court’s favorable decision actually contributed to further advancing state power.

First, the march was to take place on government-owned streets, which meant that those who had to pay taxes for upkeep of those streets and those who had to pay a cost because they were inconvenienced by the protest, had no recourse but to pay against their will. This does not even include those merchants on those particular streets whose stores would lose business because of the march. There was to be no compensation for their losses. An arm of the government was going to force unwilling people to, in reality, to pay to hear a message they did not want to hear, all in the name of freedom.

Thus, the government decreed that private individuals would have their property confiscated with no recompense (violating the Fifth Amendment). The government was also put in the position of defining the rights of the citizens, defining free speech, and was able to use its powers of "protecting free speech" to violate the constitutional rights of others.

A superficial explanation of this episode given by many "civil libertarians" is that the rights of free speech were in collision with citizens’ private property rights and that in a case like that, the First Amendment must be upheld ahead of the others. This is patent nonsense. For all the chest beating by "civil libertarians" and other constitutional "scholars," the Bill of Rights does not hold mutually exclusive statements, nor did the document’s framers envision the use of one right as a device to weaken another. First Amendment rights do not conflict with rights of the Fifth Amendment. Quite to the contrary, these rights are complementary and any attempt to separate them is nothing more than an assault upon liberty itself.

Take the recent protests in Seattle against the World Trade Organization meetings, for example. The protesters, after receiving marching permits from the Seattle City Government, promptly rampaged through the streets, trashing businesses, overturning cars, and causing general mayhem. Seattle police, while firing tear gas at the demonstrators, refused to protect the businesses, in essence declaring their sole duty was to protect "public property."

As the violent protests continued, President Bill Clinton declared his support for the issues raised by the demonstrators. The implication was clear: it is government’s role to safeguard political dissent that met the president’s approval, not private property.

A current case before the U.S. Supreme Court further highlights this false dichotomy. Anti-abortion groups have challenged a federal law that protects abortion clinics by keeping protesters off the clinic grounds as violating their First Amendment rights. The pro-lifers are correct in opposing the law, but their reasoning is wrong. Nothing in the constitution permits Congress the powers to protect local abortion clinics, as the law absurdly stretches the constitution’s commerce clause into something unrecognizable.

Furthermore, trespassing laws should easily offer protection for these clinics. The idea that abortion clinics should fall under a special federal category is absurd. However, anti-abortion individuals do not attack the law as a ridiculous act of congressional overreaching. Instead, pro-lifers claim that the law is unconstitutional because of limits it places upon their protests by prohibiting them from demonstrating on clinic property. In other words, as in Seattle, it is sometimes necessary to violate someone’s private property rights in order to preserve free speech.

For example, instead of parading down the streets of Skokie, the neo-Nazis could have demonstrated on private property in Skokie or anywhere else where either they owned property or a property owner allowed them on his land. Granted, marching around someone’s parking lot with banners and signs in hand does not have the same dramatic effect as a street march, but it does a much more effective job of protecting both free speech and property rights.

Better yet, if the streets of Skokie had been privately owned instead of being owned by the state, then the owners of the streets would have been free to permit or prohibit the march to go on. However, because government owns so much property in this country, issues of free speech are often unable to be resolved in a way which protects the U.S. Constitution and the rule of law. Instead, the state takes the precious rights of the First Amendment and uses them in a way that only expands government and erodes freedom.

The most obvious example of how the government uses the First Amendment to attack free speech is the suppression of religious activities by individuals who either work in or who are students in "public institutions." This is something beyond the standard "school prayer" issue involving teacher-led prayers during classes.

Teacher, school administrators, and pressure groups such as the ACLU have used the U.S. Supreme Court prohibitions on teacher-led school prayer to mean that any individual expression of religious belief--and especially Christian faith-—must be suppressed while that person is on "public" property. Thus, we have students who are told they cannot use any religious symbols during elementary school "show and tell" presentations, Christian student groups prohibited from meeting for prayer, and so on, all in the name of preserving the First Amendment. At the same time, one hears of supervisors of government employees ordering Christian employees to remove all "religious symbolism" such as crosses and WWJD ("What Would Jesus Do") wristbands, again in the name of supporting freedom.

As with the problem of public roads, the real culprit here is the public school system and the vast system of expansive government. Freedom and government are not synonymous, nor can they peacefully coexist. If one expands, the other must contract. In the case of true freedom of speech, government has expanded, which can only mean that authentic free speech is being suppressed.