Secrets About Money That Put You at Risk 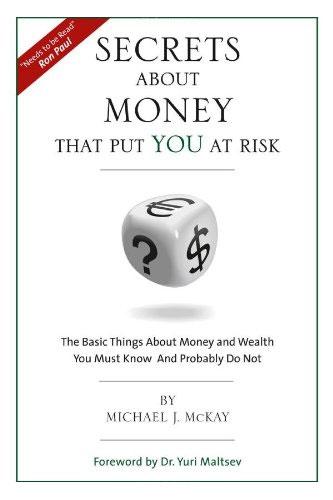 (a) the thing that most of us worry about the most, and

(b) the thing that you understand and were educated in school about the least?

Why do otherwise educated people tragically say: "I really do not understand Economics"?

In Secrets About Money That Put You At Risk Michael McKay clearly and concisely presents the basics of this vital knowledge that we should have learned in school but were never taught. This is an ABC book for adults, as well as for young people, on “What is money and how it works.” It will teach you the basic things about money and wealth you must know and probably do not.

As reviewer David Gordon stated, "Michael McKay has described in a compelling fashion essential truths about money which everyone needs to know. Once you read this book, money will no longer seem mysterious."

Dr. Ron Paul, United States Congressman, has written, "Secrets About Money by Michael McKay is a Great Summary that needs to be read by as many Members of Congress as possible."

In 1994 Michael J. McKay founded Iowa Capital Management, an investment firm with an international clientele, where he currently serves as Chief Economist and President. Michael is also the founder and host of RadioFreeMarket.com

Economics Is About Scarcity, Property, and Relationships

Everything in human life is organized around how we make decisions about three things: scarcity, property, and...

Secrets About Money That Put You at Risk