The Return of Stagflation 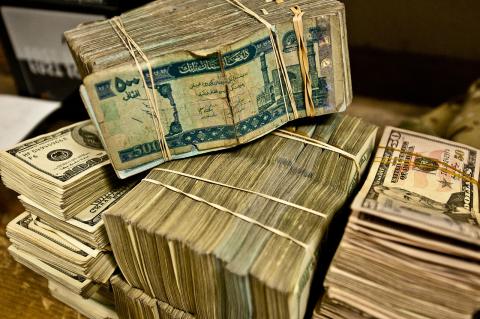 Many people believe that the world economy is undergoing pressures of a deflationary nature. It is true that a recessionary environment dominates industrialised countries (at least in America, Europe and Japan). However, this is coupled with price increases in several important market sectors in both wholesale and retail sectors. The real risk lies more in stagflation than deflation.

Stagflation is a term that originated in the early 1970s to identify the simultaneous occurrence of recession and inflation—a phenomenon that Keynesian theory had previously suggested was impossible. In Keynesian theory, recessions (and the unemployment implied by them) are cured by inflation, while inflations are cured by recessions. When both occur at once, the theory is not only seriously challenged, but fiscal and money managers are at a loss concerning what to do next.

The industrialized world is reaching just such a policy dead end, with central banks at a loss as to what to do besides lowering rates further and having legislators attempt endless rounds of fiscal stimulation.

Since 2000, monetary policies have been strongly expansionist. To fight bear markets and the slowing of GDP, central banks have chosen to inject liquidity in the banking system. The Fed and the ECB have cut their interest rates and have multiplied and intensified open market operations. This policy was facilitated by the increase, or the reappearance in the case of the United States, of budget deficits at the federal level. These policies have done nothing to forestall the advent of stagflation.

One way central banks create money is the purchase or sale of government bonds. To purchase these assets, central banks write out checks to bond dealers who deposit the new liquidity at commercial banks1. If deficits financed by bonds are not theoretically inflationary, they permit central banks to generate inflation more easily. For example, on February 25, 2003, the Fed bought $750 million in debt. So, if we think of inflation in its classical sense (an increase in the quantity of money), deflation is logically impossible. 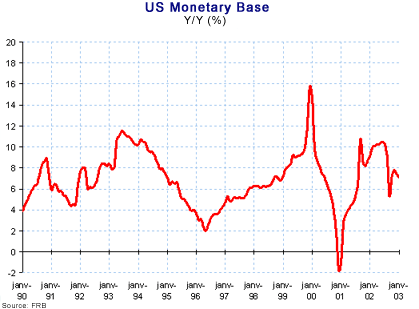 The slowing down of M2 (in US and Japan) means that banks are limited in their ability to expand credit distribution because of bankruptcies, bad debts, and the decrease in their equities, a usual feature of this period of the business cycle. But in no ways does this mean that the money supply is declining 2.

Where, then, do the new liquidities go? The theory cannot tell us the answer. In fact, we can see strong hikes in prices in several markets. But these are not given publicity, because they typically do not concern the consumers directly.

The price of industrial raw materials increased by 3.3% in January compared to December, and 13.5% year on year. The monthly index HWWA has been increasing since September 2002. Producer prices increased by 1.9% between December and January. It is the strongest monthly increase since January 2001. Year on year, the rise reaches 5.4%.

The rise in housing prices is astonishing in the United States, United Kingdom and Spain. A bubble is forming here too, that will burst when long term interest rates rise or when the unemployment rate is so high that it impairs household marketability. The bursting of the bubble will have a negative impact on consumption (because of the wealth effect) and on bank solubility (which  could lead to a credit crunch).

Another bubble is forming in the public bond markets. Since the equity market burst in 2000, dealers and banks have been using their liquidity to buy assets that offer quasi-certain performance. The price of US 10 year bonds has been soaring.

The figures do not reveal strong increases in the prices of manufactured consumer goods in countries where pricing power is weak, in particular because of the slow down in wages and the increase of unemployment. In these countries, the adjustment is carried out by a contraction of corporate profits. On the other hand, the inflationary tensions have appeared in services, in particular in Europe where this sector is not very competitive. The effects of monetary inflation can be hidden by the progression of productivity.

More significant for Austrian economists: the spectacular increase of gold prices (in US dollars). Among the liquid assets (risk adjusted), gold is at the moment one of the most profitable assets in real terms. It is highly unusual that gold and bond prices increase at the same time.

Certain observers assert that expansionist monetary policies have been preventing a more severe depression. It is true. For instance, if the central banks had not flooded the financial market with so many dollars, euros and yens, the collapse of the equity market (and of production, investment and profits) would have been more pronounced. But the problem with monetary policy is that it slows down the readjustment of the structure of production toward a configuration respecting the time preference of consumers3.

Today, the overinvestment in equipment and software has not been wholly purged (the rate of capacity utilization is historically weak).  Household debt is increasing faster than disposable income. Thus, if an expansionary monetary policy is pursued, 2003 won't be a year of recovery in the United States, Europe, or Japan, even if certain quarterly GDP figures turn out to be surprisingly strong. Let us remember that the National Bureau of Economic Research dates the end of the last recovery and beginning of the contraction as March 2001, and it has yet to call a bottom.

As for the future of interest rates, we cannot rule out a rise in nominal interest rates due to inflationary expectations. Such a rise would entail a burst of the housing bubble and a strong decline in bond prices with negative impact on household wealth and bank solvability. The only solution would be to stop the monetary inflation. The recession and the equity market crisis would be sharp, but short. If this solution is not adopted, the world economy will perform badly for several years. We have not finished paying the consequences of our international monetary system based on fiat money.