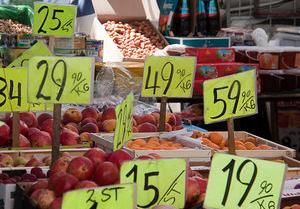 If you thought negative interest rates were as bad as it could get with central banks, you might be in for a surprise. Central banks have been so spectacularly unsuccessful with their accommodative monetary policies that they are discussing pulling out all the stops to get the results they want. They fail to realize that the reason prices aren’t rising is because they really want and need to fall. Bad debts weren’t liquidated during the last financial crisis, the debtors were merely bailed out. Overpriced assets weren’t allowed to be reduced in price. Central banks pumped trillions of dollars into the economy to attempt to paper over the recession. Market forces want to drive prices down, while central banks attempt to prop them up. So what to do when central banks aren’t getting their way?

Central bankers may very well recommend price controls in an attempt to “jolt the economy out of its doldrums.” Of course, economies don’t go into doldrums and they can’t be jolted out of them. Recessions are not something endemic to the economy but are rather the result of central bank monetary intervention. Because central banks refuse to acknowledge their culpability for causing recessions, their methods for responding to recessions end up being more of the same thing that caused them in the first place: monetary easing. And now that those methods are proving ineffective, more drastic measures might be on the way. Remember that the last time all-out wage and price controls were implemented in the United States was in the early 1970s, also a time of great monetary turmoil. In fact, the price controls were instituted by President Nixon at the same time as he closed the gold window in 1971.

As Ludwig von Mises pointed out many decades ago, once you begin to institute price controls, you inevitably lead to socialism.

That is why no one should be surprised that the governments of Japan, Europe, and the United States might resort to price controls to try to achieve what monetary policy could not. It follows logically, after all, since central bankers are in the price-setting and price control game to begin with. The interest rates that central bankers target or set are themselves prices, prices of money being loaned overnight or of money being deposited with the central bank. The aim of targeting or setting those interest rates is to influence interest rates and prices in the broader economy. So if that limited price-fixing doesn’t work, governments will expand their efforts to fix even more prices. It may not come directly, at least at first, but rather through some sort of incentivization. Pressure may be brought to bear to raise wages, using tax policy as either a carrot or a stick. The aim and the effect, though, will be to move prices to where the government thinks they ought to be, not what the market can actually bear.

If price controls are in fact enacted, it will make it all the more obvious that economic planning on the parts of central banks and governments must be firmly opposed. It will separate the wheat from the chaff, those who actually support economic freedom from those who are willing to rationalize central planning. Anyone who claims to stand for free markets, free trade, and limited government but who attempts to defend the existence or importance of the Federal Reserve or central banking is a liar. Either you support free markets and freedom of pricing or you support central bank price-fixing and creeping socialism. There is no third way or middle road — socialism and the free market are mutually incompatible. A little bit of socialism in the form of price-fixing is like a little bit of gangrene, if left unchecked it will eventually infect and kill the whole. Now that governments and central banks may endorse further price controls as a remedy, the monetary policy facade has been torn away to reveal the reality that it is just another tool that leads to intensified central planning. Will enough people rise to the occasion to oppose further transgressions against monetary and economic freedom, or will they shrug their shoulders as our society continues to slouch toward socialism?