GET NEWS AND ARTICLES IN YOUR INBOXPrint
A
A
Home | Mises Library | In a Post-Boom World, Auto Prices Will Fall

In a Post-Boom World, Auto Prices Will Fall 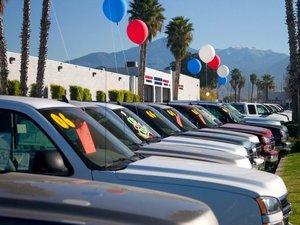 Tags Booms and BustsPricesValue and Exchange

It seems that each new bubble brings forth claims that, although the bubble may be the result of artificially created demand, prices of this or that product will not fall and may even continue to rise. How many so-called real estate and financial planning “experts” claimed that the surest path to financial security was in buying the largest house possible with the least amount of one’s own money?

The Boom: McMansions and Luxury Cars

Since home prices never go down — we were told — the gain from using OPM (other people’s money) resulted in huge multiples of gain for the little invested of one’s own money. Thus, in the first decade of the new century, Americans were buying so-called McMansions: huge homes with every imaginable feature. When the bubble burst, the leverage effect worked in reverse. Mortgage balances far exceeded the lower market price, creating the so-called “underwater mortgage.” Lower prices had wiped out not only the little equity contributed by the buyer, but created a negative equity balance. Buyers abandoned their heavy mortgages and sought smaller, lower priced homes. It turned out that home prices did not grow to the sky, as the pundits had predicted.

The same is true of automobiles, and especially those bought with auto loans. Easy credit has enticed car buyers into ever more luxurious and amenity-laden vehicles. It is nearly impossible today to buy a new car that is not loaded with luxury entertainment, navigation, and safety features that were unknown only a few years ago.

Many of these features would never have been sold in such quantities without the benefit of easy credit. As a frequent car rental customer, I have been exposed to these features and have found them difficult to use at best and completely unnecessary and distracting at the worst. On a recent business trip my modest sized four door Buick sedan’s speedometer was projected onto the windscreen and the lane proximity warnings beeped at me constantly. I never did figure out how to turn off these annoying devices, which, I admit, may be desired by a marginal few drivers. But we Austrians know that all economic choice is based on a hierarchy of preferences. The cost of each preference is measured in the alternative preferences one sacrifices. Make some preferences cheaper and they move up our personal scale. Easy auto credit meant that buyers did not have to sacrifice as many alternative uses for their money.

Last week, Tommy Behnke in Mises Daily predicted that auto prices will fall as the bubble bursts from the artificially created demand generated from excessive credit creation. Behnke pointed out that car production has increased a whopping 100 percent since 2009, but that apologists for government’s monetary stimulus programs see this fact as proof of the success of their Keynesian, aggregate demand hypothesis.

Behnke, on the other hand, took the Austrian perspective that the government has simply substituted a bubble in subprime auto loans for the bubble in subprime home loans. As defaults rise and automobile loan credit tightens, the result will be the same. Namely, a flood of used cars, and falling prices. The same happened with homes following the burst of the last bubble: a flood of “used” houses, and falling prices.

Surprisingly, the article attracted a number of reader comments predicting that used car prices would not fall, allegedly due to increases in complexity of cars or increases in the difficulty of repairing them. Another suggestion was that large dealers will dominate the used car market and simply raise prices at will.

While it’s certainly true that government interference — such as Cash for Clunkers — can raise the prices of cars, it is not true that private dealers (or any other private party) can simply raise the price. More complex and difficult-to-fix cars will not keep prices from falling in an environment in which the inventory of used cars is increasing.

There is one thing that we can know a priori: that an increase in the supply of some good or a drop in its demand will cause its price to be lower than that which it otherwise would be. There is no other way to clear the market.

Mises explained that, eventually, even a monopolist would prefer any price to zero price. Maintaining a price above the market clearing price produces zero revenue. In a flooded used-car market, car dealers must reduce their prices in order to avoid bankruptcy. Otherwise, the used car dealer ceases to be a dealer and becomes a collector. The laws of supply and demand have not been rescinded, even in a world with very expensive-to-build and complex cars. As the automobile bubble bursts, quality used cars will flood the market, creating a buying opportunity for those with cash.

As with houses, it doesn’t matter how big or luxurious or complex you make new cars. When the credit bubble bursts, auto prices will not “always go up.”