GET NEWS AND ARTICLES IN YOUR INBOXPrint
A
A
Home | Mises Library | For a New Liberty: The Libertarian Manifesto

For a New Liberty: The Libertarian Manifesto 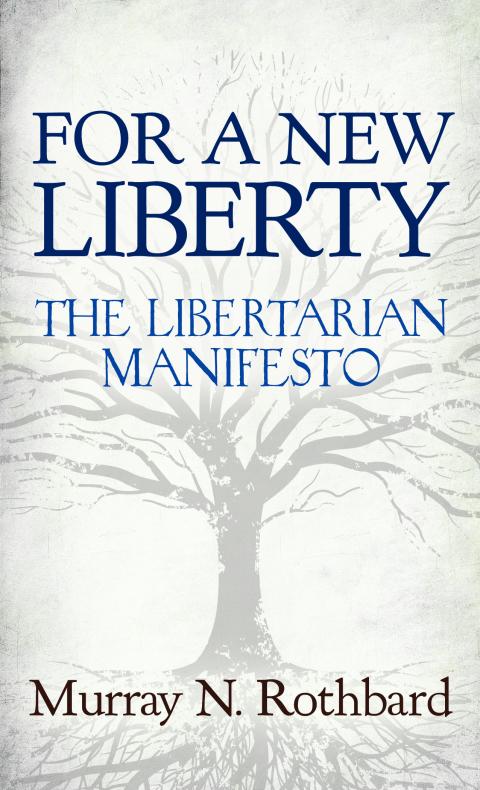 For a New Liberty The Libertarian Manifesto.pdf

For a New Liberty The Libertarian Manifesto.pdf

In For a New Liberty: The Libertarian Manifesto, Rothbard proposes a once-and-for-all escape from the two major political parties, the ideologies they embrace, and their central plans for using state power against people. Libertarianism is Rothbard's radical alternative that says state power is unworkable and immoral and ought to be curbed and finally abolished.

To make his case, Rothbard deploys his entire system of thought: natural law, natural rights, Austrian economics, American history, the theory of the state, and more.

It is relentless, scientific, analytical, and morally energetic—a book that makes an overwhelming case. Indeed, it gave an entire movement its intellectual consciousness and earned Rothbard the titles "Mr. Libertarian" and "The State's Greatest Living Enemy."

Society without the nation-state? Rothbard shows that this is the way for peace, prosperity, security, and freedom for all. In the entire history of libertarian ideas, no book has more successfully combined ideological rigor, theoretical exposition, political rhetoric, historical illustration, and strategic acumen. Rothbard poured a lifetime of research and all his intellectual energy into this project and he succeeded in writing a classic.

The book is the result of the only contract Rothbard ever received from a mainstream commercial publisher. He was asked to sum up the whole of the libertarian creed. Looking at the original manuscript, which was nearly complete after its first draft, it seems that it was a nearly effortless joy for him to write. It is seamless, unrelenting, and full of life.

He cut no corners and pulled no punches. It appeared in 1973 and created a whole movement that set out to crush the political monopoly.

From the day the book went out of print, the phone calls and emails started coming into our offices, hopeful of a new edition. Thanks to benefactors who have made it possible, this new edition from the Mises Institute is hardbound, beautiful, and affordable.

In subject after subject, this book is informative, bracing, and challenging. It also features the characteristically clear writing style for which Rothbard is famous, which stemmed from his organized thinking and passionate drive to teach and change the world.

The book begins with American history to show that the revolution of 1776 was the most libertarian of any in history. The pastors, pamphleteers, and statesmen who led it held that the state has no rights that the people themselves do not possess. They demanded full liberty, not some truncated version that existed in the old world. In this discussion, the reader comes to appreciate the founders of the United States of America as never before.

Rothbard then sets out to rekindle that fire, first through a discussion of the philosophy and ethics of freedom. The central axiom: no man or group of men may aggress against the person and property of anyone else. He justifies the axiom on the basis of natural rights. It is an axiom that has few opponents, until Rothbard spells out its implications: taxation is theft, conscription is slavery, and war is mass murder, among many other points.

Bracing indeed! But the state is the primary violator of this simple axiom. It presumes the right to rob and kill while purporting to protect us from robbing and killing. Thus follows a full theory of the state, how it gains and maintains controls over the population (but not through a “social contract”!), the various failed methods for keeping it in check (not even constitutions work!), its operations and tendencies to work its evil (it never has enough power), and how intellectuals become co-opted by the forces of state power.

Here again, Rothbard draws his argument from American history. He shows how dangerous it was for the US Constitution to entrust the Supreme Court with the job of policing the government for infractions against the Constitution. What it ended up doing, of course, was ratifying egregious violations of the Constitution, with full knowledge that there was no higher court to which the people themselves could appeal

Rothbard isn’t satisfied to make his case on this abstract level. He shows that the most pressing problems of society are wrapped up in government operations. Whether it is medical issues, the price of oil, the disaster of education, conflicts over religion, police corruption, or the scandal of war, the issues that are tearing us apart are invariably the result of government intervention into the sector. When markets are in full control—whether markets for computer technology and software, or for cell phones—we find not conflict but cooperation and progress.

And so Rothbard demonstrates the failure of government and the triumph of markets in a host of areas: personal liberties, education, welfare, inflation and the business cycle, monopoly and regulation, streets and roads, environmentalism and economic growth, and even police, courts, and law. Nor does he neglect the hugely important areas of trade, war, and foreign policy. He shows that states that are aggressive abroad do not maintain liberty at home. He also pioneers a theory of peace in absence of the state.

This book is generous with detail on the whole of American history, from the banking debates of the 19th century, through the welfare debate of the 1960s and the controversies over environmental regulation in the 1970s. He shows that the state creates social and economic problems and then further intervenes to make these problems worse then ever while increasing its power at the expense of everyone else. He is particularly good at highlighting who really benefits from government regulation: usually it is the largest corporations who are attempting to rig the game in their favor.

The anticipated effect of this book on both liberals and conservatives, the Left and the Right, is to force a rethinking of the typical categories. It asks that all sides face their hypocrisies: the Left favors freedom of speech but cares nothing for the private property that guarantees such freedom. The Right demands lower taxes but wages culture wars and real wars that grant government more power to take liberty and property from the American family.

As you can see, this is a radical and challenging book. We are given not only the big picture or a series of small studies but both at once, fully integrated into an analytical whole. Once you are exposed to the complete picture—and For a New Liberty has been the leading means of exposure for more than a quarter of a century—you cannot forget it. It becomes the indispensable lens through which to interpret events in the real world with the greatest possible clarity.

This book more than any other explains why Rothbard seems to grow in stature every year (his influence has vastly risen since his death), why the state continues to regard libertarian ideas as the gravest threat to its power, and why Rothbardianism has so many enemies on the left, right, and center.

Quite simply, the science of liberty that he brought into clear relief is as thrilling in the hope it creates for a free world as it is unforgiving of the error of power. Its logical and moral consistency, together with its empirical-explanatory muscle, represents a threat to any intellectual vision that sets out to use coercion and violence to refashion the world. And yet, to the same extent, it also impresses the reader with a hopeful vision of what might be.

Rothbard chose to pull no punches. Trimming and compromising for the sake of the times or the potential audience was just not his way. He knew that he had a once-in-a-generation chance to present libertarianism in all its glory, and he was not about to pass it up. And thus do we find in this masterpiece: not just a case for cutting government but for eliminating it altogether, not just an argument for assigning property rights but for deferring to the market even on questions of contract enforcement, and not just a case for cutting welfare but for banishing the entire welfare-warfare state.

Whereas other attempts to make a libertarian case, both before and after this book, might typically call for transitional or half measures, or be willing to concede as much as possible to statists, this is not what we get from Murray. Not for him such schemes as the privatization of government programs that should not exist at all. Instead, he presents and follows through with the full-blown and fully bracing vision of what liberty can be. This is why so many other similar attempts to write the "Libertarian Manifesto" have not stood the test of time, and yet this book remains in high demand.

Similarly, there have been many books on libertarianism that have appeared in the intervening years that have covered philosophy alone, politics alone, economics alone, or history alone. Those that have put all these subjects together have usually been collections by various authors. Rothbard alone had the mastery in all fields that permitted him to write an integrated manifesto—one that has never been displaced. And yet his approach is typically self-effacing: he constantly points to other writers and intellectuals of the past and his own times.

In addition, Rothbard never talks down to his readers, who will discover that every page exudes energy and passion, that the logic of his argument is impossibly compelling, and that the intellectual fire that inspired this work burns as bright now as it did all those years ago.

The last section is entitled “A Strategy for Liberty.” Here he explains why we can’t count on the political class, big business, big media, or big foundations to point the way toward a libertarian future. We must work through the young on campuses and through our own institutions that we build from the ground up. He shows that the moment is right, that pockets of liberty are all around us. It is up to us to lead in the educational effort and to fight for our ideals in every way.

He ends with a bold and inspiring call for us all to throw ourselves into the main battle of our time, which is the battle between the forces of despotism and the freedom of all. Rothbard’s enthusiasm and optimism is as sincere as it is infectious.

The book is still regarded as "dangerous" precisely because, once the exposure to Rothbardianism takes place, no other book on politics, economics, history, or sociology can be read the same way again. The news on television and in papers will never read the same way either.

Rothbard rediscovers the liberty that is our heritage and can again be our guiding principle in all aspects of public life. It set off a firestorm when it was published. What was once a commercial phenomenon has truly become a classic statement of the political foundations of civilization.