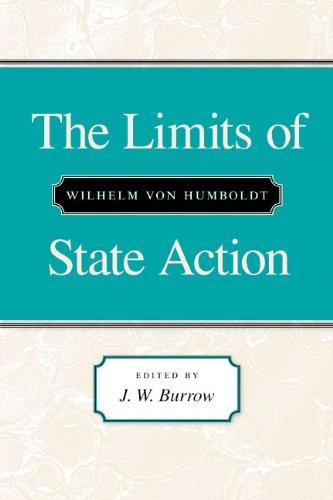 The Limits of State Action, by "Germany's greatest philosopher of freedom," as F. A. Hayek called him, has an exuberance and attention to principle that make it a valuable introduction to liberal political thought. It is also crucial for an understanding of liberalism as it developed in Europe at the turn of the nineteenth century.

Humboldt explores the role that liberty plays in individual development, discusses criteria for permitting the state to limit individual actions, and suggests ways of confining the state to its proper bounds. In so doing, he uniquely combines the ancient concern for human excellence and the modern concern for what has come to be known as negative liberty. —J. W. Burrow is Professor of History at the University of Sussex

Friedrich Wilhelm Christian Karl Ferdinand von Humboldt (22 June 1767 – 8 April 1835) was a Prussian philosopher, government functionary, diplomat, and founder of the Humboldt University of Berlin, which was named after him in 1949 (and also after his younger brother, Alexander von Humboldt, a naturalist).

Humboldt explores the role that liberty plays in individual development, discusses criteria for permitting the state...