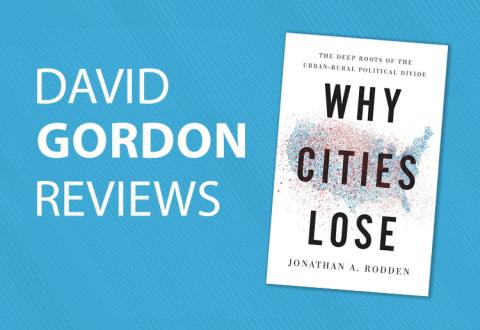 Jonathan Rodden is unhappy. In American elections, Democrats often receive a larger number of votes than their Republican rivals, but they nevertheless frequently fail to win elections. “In most democracies, the path to victory is simple: win more votes than your competitors. For the Democratic Party in the United States, however, this is often not good enough.…Democrats must win big in the overall popular vote, as they did in the ‘blue wave’ elections of 2018 and 2006, in order to win a majority of seats in the House. The Democrats’ problem with votes and seats is even more pronounced in state legislatures.”

Rodden, who is a professor of political science at Stanford, specializes in political geography. In Why Cities Lose, he devotes enormous effort to finding out the reasons the situation just described has come about, but the gist of his answer is simple. Democrats are highly concentrated in cities, but Republicans are spread out in the suburbs and rural areas. As a result, a Democrat who wins in a city will likely gain a large majority. In our “first-past-the-post” electoral system, a large majority is no better than a narrow victory. The winner of a seat in Congress, for example, gets one seat regardless of the margin of his victory. “Surplus” votes do him no good. Republicans in rural areas are more spread out. Their votes tend to be more “efficient,” as Rodden puts it, than the wasted votes of the concentrated Democrats. They win by narrower margins but gain more seats. Rodden spends a great deal of time showing that partisan gerrymandering does not bear exclusive responsibility for the situation. Through careful comparison with Britain and the Commonwealth nations that have a “first-past-the-post” system but no gerrymandering, he shows that cities still suffer from “wasted” votes.

Rodden argues that proportional representation would change matters. Under this system, votes are not wasted. “There are important variations from one country to another, but in most cases, the country is divided up into a series of multimember districts, and within each district, every party receives a number of seats that is proportionate to its share of the vote.…In highly proportional systems with large districts, like those in northern Europe, the geography of a party’s support is largely irrelevant for the transformation of votes to seats. It is just as useful to have 30 percent of the vote that is highly concentrated in cities as to have 30 percent of the vote evenly dispersed throughout the country.” I have said that Rodden is unhappy with the dilution of votes in American cities, but why does he regard this situation as bad? (One might object that this misreads him; he is simply an objective political scientist describing and analyzing an important trend in voting patterns. But his dismay is unmistakable.) Speaking of countries in northern Europe with proportional representation, he says: “Above all, the proportional systems of Europe have developed larger public sectors, more generous social expenditure, higher levels of redistribution, and more stringent efforts at environmental protection.”

These are the measures Rodden favors, but then the question arises, what is so good about them? Not only does Rodden fail to tell us, but his way of looking at political values prevents him from doing so. He never discusses the reasons in favor of and against any “progressive” legislation. Instead, he amalgamates all political values into “objective” scales. “In joint work with Aina Gallego, I [Rodden] have selected a series of questions about abortion, homosexuality, and other social issues.…We used these questions to generate a scale measuring how liberal or conservative each respondent is on this set of social issues. We have done the same thing for classic economic issues related to the role of the government in the economy.”

Rodden might reply that he has done this purely as a way to analyze trends, and that he has not claimed to have shown that progressive measures are good and conservative ones bad. But if that is so, he has not given us any reason to endeavor to alter the urban-rural disparity in voting about which he spends so much time complaining.

One might object to what I have so far contended in this way: “Even if you are not an urban progressive, we do after all live in a democracy. Shouldn’t people be equally represented, rather than have fewer representatives than others? Isn’t it unfair that some votes pack more electoral ‘power’ than others?” To which our answer must be, “No, not at all. It depends on aims sought by those voting. People cannot legitimately invade the rights of others, and to the extent they try to do so, a weakening of their voting power is to be welcomed.”

As Murray Rothbard, writing in Power and Market, noted with characteristic wisdom: “Democracy may be thought of, not so much as a value in itself, but as a possible method for achieving other desired ends. The end may be either to put a certain political leader into power or to attain desired governmental policies. Democracy, after all, is simply a method of choosing governors and issues, and it is not so surprising that it might have value largely to the extent that it serves as a means to other political ends. The socialist and the libertarian, for example, while recognizing the inherent instability of the democratic form, may favor democracy as a means of arriving at a socialist or a libertarian society. The libertarian might thus consider democracy as a useful way of protecting people against government or of advancing individual liberty.” Like democracy, equal voting power isn’t an end itself, but valuable only to the extent it protects people’s rights.

A similar point applies to the proportional representation that Rodden favors. It is true that voters have more choices than they do in a system with only two parties, but whether this is good or bad depends on the nature of the choices. More choices for socialism are not a good thing. Further, European political parties in proportional systems are often rigidly controlled by the central party organization. Those who vote against the party’s dictates will be expelled from the party. Voters have a choice only between ideological platforms, not persons.

Rodden at one point adopts a more sensible position. Given the unalterable fact that people differ so widely in their political preferences, is it not desirable to deal with problems at the state or, even better, local level rather than to engage in a futile effort to impose the same policies on diverse regions? “As federal politics becomes increasingly mired in gridlock, investigations, and partisan posturing, voters come to rely on state and municipal governments for practical policy solutions to everyday problems.…As long as people with strong preferences are clustered conveniently into different jurisdictions, decentralization can, at least in theory, increase the number of people who are satisfied with government policy.”

But decentralization from his perspective is of limited value. “A broad constraint on decentralization as a way of managing polarization is the fact that local governments must often compete with one another.…Wasteful taxes and regulation and poor governance can lead to capital flight, which forces local governments to be prudent. For the left, this has always been a liability, not an asset of decentralization. Strong labor unions and protections for workers were hard to maintain in the North when southern states began competing for investment, and today, intergovernmental competition makes it difficult for blue cities and states to enact generous welfare policies or costly regulations.” (Possibly, though, what Rodden calls the “third industrial revolution” may brighten the prospects for a leftist local government, at least in the wealthiest cities.)

Contrary to Rodden, the path to progress does not lie in tinkering with our political system to make it easier for the Left to enact its political and social agenda. Instead, we need a free people living in a free market.