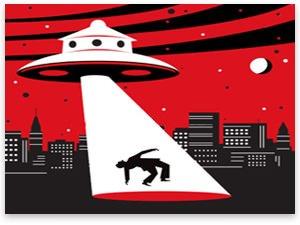 Paul Krugman of Princeton University has come up with the ultimate solution to our fiscal problems: Space Aliens.

It's very hard to get inflation in a depressed economy. But if you had a program of government spending plus an expansionary policy by the Fed, you could get that. So, if you think about using all of these things together, you could accomplish, you know, a great deal. If we discovered that, you know, space aliens were planning to attack and we needed a massive buildup to counter the space alien threat and really inflation and budget deficits took secondary place to that, this slump would be over in 18 months.

The idea is this: in spite of the federal-government spending at the annual rate of 11 percent of GDP more than it is taking in, there isn't enough stimulus to get our woeful economy going. So, the answer is more spending; indeed, much more spending.

If a "shot in the arm" isn't enough, then break out the defibrillator!

According to Keynesian economists, the only thing that got us out of the Great Depression was World War II. Mind you, this admits that, in spite of FDR and the New Deal, the country remained mired in depressed conditions for 12 years, from 1929 to 1941. But, then, kicking somebody under the bus is what Keynesians have to do because of the incessant failures of their policies.

One tiny, little problem with this prosperity is that there was nothing to buy with the money you earned and, besides, money wasn't the problem: you needed ration coupons.

So where did all the earnings go? Why, to war bonds. It was a fantastic economy of everybody working, the government spending all the money on war making, tax rates that reached up to 100 percent, the masses of people forced into subsistence through rationing, and even such things as family formation postponed into the future. A veritable workers' paradise!

But, then came the dreaded day that these happy times ended, first with victory in Europe, and then with victory in the Pacific. What was to happen? Why, without the Atlas of Keynesian economics holding up the world, we were doomed to relapse into the Great Depression.

Yes, boys and girls, that's what the Keynesians were saying back then: how reckless was the new Congress, elected in 1946, to rapidly demobilize, end rationing and wage and price controls, slash spending, cut taxes, and generally to roll back the New Deal.

President Truman railed against this Congress. It was the "do-nothing Congress," he said. Well, one thing they did do was get Truman reelected. Just as the economy rebounded strongly, so did the approval rating of "Give 'em hell, Harry."

Over there, the Keynesian smarty-pants from the Ivy League were telling the US military governor, General Lucius Clay, not to dismantle the state apparatus for controlling the economy. But, instead of listening to the Americans, Clay followed the advice of certain dissidents who had, somehow, survived the Nazi period, most prominently, Wilhelm Röpke and Ludwig Erhard.

Following their advice, Clay ended the wage and price controls, the production controls, and the other interferences in the German economy and — voila! (or maybe I should say Achtung!) — an economy that had been devastated by war and socialism suddenly revived.

Today, we might take a look at Germany. From a balanced budget during 2007–2008, Germany has been running a deficit of 3 percent of GDP during these tough times. So, with only modest stimulus compared to our deficit of 11 percent of GDP, what do you think has been happening to unemployment in that country? Keynesians would predict that it is worse in Germany than in the United States.

Is it another miracle? Or is Keynesian economics simply a bunch of hooey?

This Keynesian-economics stuff was really nothing new when it got renamed "Keynesian economics." Underconsumptionism always breaks out during depressions. It appeals to "common sense," which in this case is wrong; and, it certainly appeals to the politicians.

E.F.M. Durbin said, "As in all previous depressions the commonest explanation which is offered to the mass of thinking people is some form of underconsumption theory."1

Thus, Murray Rothbard, in looking at the depressed conditions that followed the Panic of 1819, identified various forms of "relief" legislation, including the chartering of new banks in order to maintain spending. The same thing occurred again and again in subsequent depressions, through to the Great Depression, at which time Lord Keynes's name got attached to the impulse.

Even the so-called new twist to stimulus spending this time — of spreading the wealth around — is nothing new. Ludwig von Mises wrote,

In speaking of underconsumption, people mean to describe a state of affairs in which a part of the goods produced cannot be consumed because the people who could consume them are by their poverty prevented from buying them … Hence various disarrangements and disturbances arise, the total complex of which is called economic depression.2

But what is new — and for this I have to give Krugman credit — is combining Keynesian economics with Space Aliens.

Give the man another Nobel Prize!