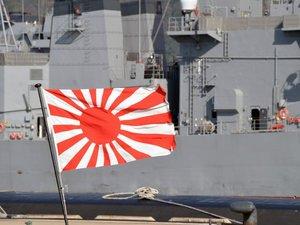 Japanese Prime Minister Shinzo Abe has been pressing for more military spending in Japan, in what critics claim is a violation of Japan’s so-called pacifist constitution. Foreign Policy reports:

In January, the government of conservative Japanese Prime Minister Shinzo Abe endorsed a defense budget of nearly 5 trillion yen, or $42 billion, continuing a three-year growth trend after nearly a decade of decline. The sum still represents a small portion of Japan’s GDP — it accounts for just one percent of it, according to the World Bank — but because offensive military action is prohibited by Japan’s constitution, even a modest increase is controversial.

Japan Has a Big Military Already

We often speak of the Japanese military as if it were some sort of skeleton crew of caretakers. This is not the case at all. Japan spends more on its military than India, for instance, which is in an arms race with Pakistan and has many border issues with which to deal. Indeed, according to the International Institute for Strategic Studies, Japan is the number-seven country in terms of military spending, placing it ahead of hot-spot countries like Israel and South Korea. The IISS estimates that Japan’s military spending is $47 billion, compared to Russia’s $70 billion and China's $129 billion. (The US, of course, spends far more than everyone else with $581 billion.)

So, we find that Japan’s military is hardly insignificant. Yes, Russia has a larger military, but Russian military might is primarily directed toward Eastern Europe, thousands of miles away, and China has many neighbors other than Japan to deal with, and it has a much larger territory that does not enjoy the natural defensive advantage of being an island nation. Moreover, everyone knows that Japan could build deliverable nuclear weapons very quickly if necessary, and it has access to some of the best military technology in the world.

The US Needs More Spending from Japan

Writing back in the year 2000, military historian and international affairs scholar Chalmers Johnson had already predicted that Japanese military spending would increase over the next decade. And now, fifteen years later, he has been proven right.

The reason for the increase in Japanese spending is not due to any Japanese attempts to assert independence from Washington, or a reborn nationalism. Washington still has Tokyo well under its thumb, and there is little danger of the US being thrown out of its multiple and massive military installations in Okinawa.

No, Johnson, wrote, the reason the US wants more military spending from Japan is that the US empire is overextended and running out of money. This was obvious even back in 2000, but the long inexorable march toward slow bankruptcy for the US continues. Among the American satellite states gained after WWII (i.e., Germany, South Korea, Japan) Japan has subsidized the American military the most. That is, Japan is expected to “contribute” more to the American presence in East Asia (in terms of land and spending) than either Germany or South Korea. As the US economy has become less robust, the US has demanded more money from the Japanese. (See Mark Mateski’s Mises Daily article on the “strategy” behind US military spending.)

Johnson writes in his 2000 book Blowback:

Already, the United States cannot afford its various and ongoing global military deployments and interventions and has begun extracting ever growing amounts of “host-nation support” from its clients, or even direct subsidies from its “allies.” ... Japan also pays more generously than any other nation for the American troops on its soil.

Johnson remembers how Japan, even though it avoided military involvement in the 1991 Gulf War, paid $13 billion to the US to finance the war. (Back then, that was a lot of money.)

The current drive to get more military spending out of Japan is part of this continued trend. The biggest departure from history in the new agreement is not the increase in spending, but new provisions that allow the Japanese military to engage in “non-defensive” military operations to assist the United States government. For example, Japan could be in the position of shooting down missiles headed for the United States, and also assisting with military operations geared toward opposing Chinese military expansion off the coast of China, such as Chinese efforts to better control the Spratley Islands. One Japanese lawmaker nearly said as much:

“The bills [expanding the military] are needed because the security situation around our country is changing dramatically,” he said, listing China’s opaque military expansion and tensions over disputed islands among the problems Japan faces.

And that new military spending won’t just stay in Japan, of course. And this makes more Japanese spending an even better deal for American military special interests. Foreign Policy notes that the spending increases will be good for Americans weapons contractors:

But $240 billion can buy Tokyo a lot of new equipment, which could be good for American defense contractors. F-35s are made by Lockheed Martin, based in Texas, and the Marine vehicles are manufactured by BAE Systems, based in Northern Virginia.

Thus, it’s likely Japanese opposition to the military expansion goes beyond mere ideological commitment to “pacifism.” Many Japanese also know that it’s just the latest spending plan to help out the Americans who have certainly already taken their pound of flesh or two over the past seventy years.

It would be one thing if the US were actually disengaging from Asia and seeking to diminish its military engagements in Asia. But that’s not happening, and the US is seeking to ramp up its military involvement in East Asia. But to pull it off, the US must get Japan to pay for more of it. If an actual crisis occurs, however, — which is made more likely by an expanded American military presence — all bets will be off and “emergency” military spending will go through the roof, with the deficit-spending spigots (i.e., money supply growth) turned to full-blast.