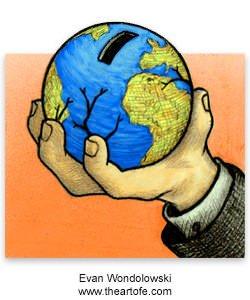 What governments call international monetary cooperation is concerted action for the sake of credit expansion. They have learned that credit expansion, when limited to one country only, results in an external drain. They believe that it is only the external drain that frustrates their plans of lowering the rate of interest and thus of creating an everlasting boom. If all governments were to cooperate in their expansionist policies, they think, they could remove this obstacle. What is required is an international bank issuing fiduciary media that are dealt with as money-substitutes by all people in all countries.

There is no need to stress again here the point that what makes it impossible to lower the rate of interest by means of credit expansion is not merely the external drain. This fundamental issue is dealt with exhaustively in other chapters and sections of this book.

But there is another important question to be raised.

Let us assume that there exists an international bank issuing fiduciary media the clientele of which is the world's whole population. It does not matter whether these money-substitutes go directly into the cash holdings of the individuals and firms or are only kept by the various nations' central banks as reserves against their issuance of national money-substitutes. The deciding point is that there is a uniform world currency. The national banknotes and checkbook money are redeemable in money-substitutes issued by the international bank. The necessity of keeping its national currency at par with the international currency limits the power of every nation's central banking system to expand credit. But the world bank is restrained only by those factors that limit credit expansion on the part of a single bank operating in an isolated economic system or in the whole world.

Then the ideal of the Keynesians is realized. There is an institution operating that can exercise an "expansionist pressure on world trade." It is free to pour a horn of plenty over the world.

However, the champions of such plans have neglected a fundamental problem, namely, that of the distribution of the additional quantities of this credit money or of this paper money.

Let us assume that the international authority increases the amount of its issuance by a definite sum, all of which goes to one country, Ruritania. The final result of this inflationary action will be a rise in prices of commodities and services all over the world. But while this process is going on, the conditions of the citizens of various countries are affected in a different way. The Ruritanians are the first group blessed by the additional manna. They have more money in their pockets while the rest of the world's inhabitants have not yet got a share of the new money. They can bid higher prices, while the others cannot. Therefore the Ruritanians withdraw more goods from the world market than they did before. The non-Ruritanians are forced to restrict their consumption because they cannot compete with the higher prices paid by the Ruritanians. While the process of adjusting prices to the altered money relation is still in progress, the Ruritanians are in an advantageous position against the non-Ruritanians. When the process finally comes to an end, the Ruritanians have been enriched at the expense of the non-Ruritanians.

The main problem in such expansionist ventures is the proportion according to which the additional money is to be allotted to the various nations. Each nation will be eager to advocate a mode of distribution that will give it the greatest possible share in the additional currency. The industrially backward nations of the East will, for instance, probably recommend equal distribution per capita of population, a mode that would obviously favor them at the expense of the industrially advanced nations. Whatever mode may be adopted, all nations would be dissatisfied and would complain of unfair treatment. Serious conflicts would ensue and would disrupt the whole scheme.

It would be irrelevant to object that this problem did not play an important role in the negotiations that preceded the establishment of the International Monetary Fund and that it was easy to reach an agreement concerning the use of the IMF's resources. The Bretton Woods Conference was held under very particular circumstances. Most of the participating nations were at that time entirely dependent on the benevolence of the United States. They would have been doomed if the United States had stopped fighting for their freedom and aiding them materially by lend-lease.

The government of the United States, on the other hand, looked upon the monetary agreement as a scheme for a disguised continuation of lend-lease after the cessation of hostilities. The United States was ready to give and the other participants — especially those of the European countries, most of them at that time still entirely occupied by the German armies, and those of the Asiatic countries — were ready to take whatever was offered to them. The problems involved will become discernible as soon as the wartime attitude in the United States toward financial and trade matters is replaced by a more realistic mentality.