How Mises Changed My Mind 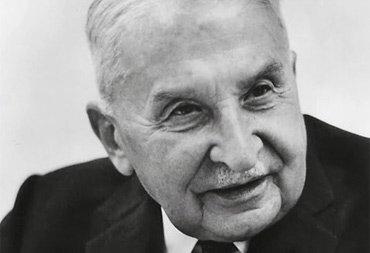 It was in September 1928, at the conference of the "Verein fur Socialpolitik" which I  had organized at Zurich that I met Ludwig von Mises for the first time. I had just read Mises' book entitled Liberalismus which was a revelation for me as a young student of economics and I was interested to meet its author. It was at the end of the twenties when socialism in Germany was in full swing. I had in the early twenties joined the Socialist party which was at that time for a young man a good thing to do, according to the proverb: If a man at twenty is not a socialist he has no heart; if at forty he is still a socialist, he has no brains.

The "Verein fur Socialpolitik" founded in 1872 by Gustav Schmoller was known for decades as the organization of the "Kathedersozialisten." The panel of the Zurich conference had two main speakers: Werner Sombart delivering a lecture on "The Crises of Capitalism" and Walter Eucken on "Cycle Theories." Sombart was in those days the great personality in political science, while Eucken, at that time, was still a modest and almost unknown "Privatdozent." There was another gentleman among the 300 participants with a quick mind who was tirelessly attacking the socialist ideas: Ludwig von Mises.

I still remember how I upset my professor of economics at the University of Zurich when I expressed my admiration for the ideas of Mises and my contempt for those of Sombart. Youth always likes to oppose and to disagree with the older generation. But it was not only for this reason that I was interested in the writings of Mises. It was for a greater part the result of having worked for four years in an industrial suburb of Winterthur as a teacher of a secondary school with a socialist school board, a socialist administration and a socialist town council. I became fed up with the socialist philosophy, killing all initiative and spontaneous action. After the work Liberalismus, I soon started studying Die Gemeinwirtschaft which Mises had first published in 1922, a comprehensive critique of socialism which was then considered to be his main work.

Owing to the influence of these books I changed my mind completely. Although I could not attend the two subsequent meetings of "Verein fur Socialpolitik" in 1930 and 1932, 1 followed closely what was said in these meetings and what was published in the "Schriften des Vereins fur Socialpolitik" such as the writings of Wilhelm Ropke and Alexander Rustow, the latter having delivered at the conference of Dresden in 1932 a paper which can be regarded as the founding speech of neo-liberalism.

Albert Hunold was a member of the Society Mont Pelerin at its first meeting in 1947. He later became secretary of the Mont Pelerin Society.

Albert Hunold was a member of the Society Mont Pelerin at its first meeting in...

How Mises Changed My Mind