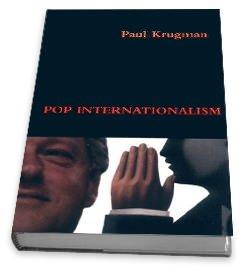 When it comes to proponents of Keynesian economics, none has a broader stage or influence than Paul Krugman. For almost a decade now, Krugman has used his New York Times column to promote both Keynesian economic policy and the Democratic Party's agenda, as well as to mock opposing economic theories such as the Austrian business-cycle theory (which he labeled the "hangover theory" in his infamous Slate article from 1998). It should come as no surprise, then, that the Mises community has taken up intellectual arms in a variety of forums against Krugman's attacks. From economist William L. Anderson writing his aptly titled blog, Krugman-in-Wonderland, to Robert P. Murphy's challenging the Nobel laureate to a moderated debate, proponents of Austrian economics have developed a special place in their hearts for critiquing Krugman.

Though Krugman may play for the "other team" in economic theory, I have always found his writing style entertaining. So I was pleasantly surprised to see many bloggers who promote the Austrian point of view commending an older, lesser-known book of his, Pop Internationalism. The book is a collection of 13 essays highlighting the benefits of free trade and showing the fallacies of protectionism. I had already suffered through Krugman's more popular The Conscience of a Liberal and The Great Unraveling, so I figured I would take a chance and spend the money for a used copy in order to see what all the hype was about. After all, Krugman won the Nobel Prize for his contributions to "new trade theory," not for his continuing calls for massive stimulus spending and raising taxes on the rich, nor for accusing conservatives of being monsters bent on impoverishing the whole country.

If there is one thing Paul Krugman has proven he is great at, it's ridiculing his opponents. Even when Pop Internationalism was first published in 1997, Krugman wasted no time in the introduction accusing "pop internationalists" for engaging in "intellectual laziness."1 His main targets throughout the book were those influential people in the Clinton administration who claimed that the American government needed to adopt a broad industrial policy in order to keep the country economically competitive. These targets include former dean of the MIT Sloan School of Management and author of the best-seller Head to Head: The Coming Economic Battle Among, Japan, Europe, and America Lester Thurow, former secretary of labor Robert Reich, and former presidential candidate Ross Perot, among others.

Krugman's basic premise throughout the book is that free and globalized trade is not something a wealthy country such as the United States should fear, but rather something it should embrace. Protectionist fears of free trade such as "massive unemployment" and "trade deficits" are unjustified according to Krugman, because

what drives trade is comparative rather than absolute advantage. Maintaining productivity growth and technological progress is extremely important; but it is important for its own sake, not because it is necessary to keep up with international competition.2

Krugman points out that the idea of a country adopting an industrial policy to help certain "high-value" industries to be competitive in the world economy is superfluous. "Why," Krugman asks, "weren't private markets already doing their job?"3 He goes on to state that "the productivity of the average American worker is determined by a complex array of factors, most of them unreachable by any government policy."4 Surprising remarks indeed, coming from Krugman. To top off his embrace of market efficiency over government policy, he even goes on to acknowledge that government intervention to improve competitiveness can ultimately lead to "misallocations of resources."5

Misallocations of resources? That's not a far cry from the inflation-induced "malinvestments" that the likes of Mises, Hayek, and Rothbard have warned about for the past century.

University of Michigan economics professor Mark Perry recently came out with a series of posts on his blog Carpe Diem that highlight the increases in productivity of manufacturing in the United States. Below are the graphs highlighted: 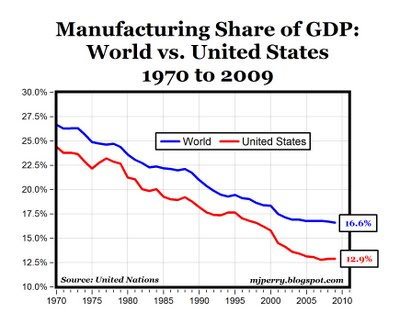 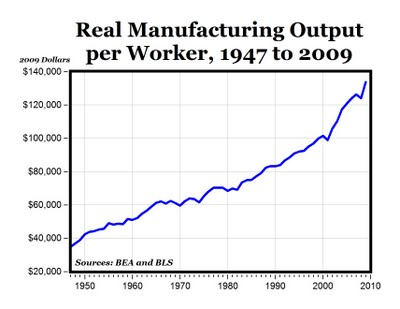 Perry, Mark J. "'Decline of Manufacturing' is Global Phenomenon: And Yet the World Is Much Better Off Because of It." Carpe Diem. April 29, 2011.

Perry, Mark J. "How Increasing Worker Productivity Has Led to the 'Decline of Manufacturing' as a Share of US GDP." Carpe Diem. May 1, 2011.

Dr. Perry comes to the conclusion that

the complaints about the "decline in U.S. manufacturing" are really a somewhat-misguided acknowledgment of the global shift in production that has taken place since we entered the Information Age with the commercial introduction of the microchip in 1971 and gradually left the Machine Age behind. When we complain that "nothing is made here anymore," it's not so much that somebody else is making the stuff we used to make as it is the case that we (and others around the world) just don't need as much "stuff" any more in relation to the overall size of the economy.6

It is great that Dr. Perry highlights the unfounded fears about America's declining manufacturing. Surprisingly, Krugman made the same claim in Pop Internationalism almost 15 years ago:

In 1970 US residents spent 46 percent of their outlays on goods (manufacturing, grown or mined) and 54 percent on services and construction. By 1991, the shares were 40.7 and 59.3 percent, respectively, as people began buying comparatively more health care, travel, entertainment, legal services, fast food and so on. It is hardly surprising, given this shift, that manufacturing has become a less important part of the economy.7

As our manufacturing became more efficient and productive, thus driving down costs, it left more capital to be invested in the service sector. Because manufacturing-productivity increases cause more capital to flow to highly specialized industries, this gives low-wage countries an opportunity to achieve a "comparative advantage" in manufacturing due to an inflow of foreign capital. This in turn raises their own standard of living. Krugman provides a model a la David Ricardo, showing this correlation as he dismisses the type of protectionist rhetoric that plagued the passing of the North American Free Trade Agreement.8

Throughout Pop Internationalism, Paul Krugman makes a great case for how free trade and the global economy raise the living standards of both wealthy and impoverished nations. That being said, the book is far from perfect. Though Krugman is not nearly as gung-ho Keynesian in this book as he has been in his recent writings, he still makes a number of endorsements for government intervention into the economy. These include advocating for currency devaluation to improve the competitiveness of a country (though he admits it may lower living standards for those whose currency is devalued),9 and even taking a shot at Say's law.10

For proponents of the Austrian theory, Krugman's Pop Internationalism is welcome relief from the "vulgar Keynesianism" that fills his New York Times column. Despite the book's flaws, Krugman does a great job at dismissing unfounded fears about free trade. In the end, he even provides a quasi endorsement of Misesian praxeology and logical deduction:

But economics is not a dismal science because the economists like it that way; it is because in the end we must submit to the tyranny not just of the numbers, but of the logic they express.

If only every New York Times columnist took Krugman's advice — including himself. Till then, he will continue to be the economist Austrians love to hate. If you want to read a decent case for free trade, and you feel like blowing a few bucks, Pop Internationalism is worth it just for the irony factor of Krugman writing it. At least you will be spending to boost the economy — because we all know that consumption is ultimately what leads to economic growth, right?