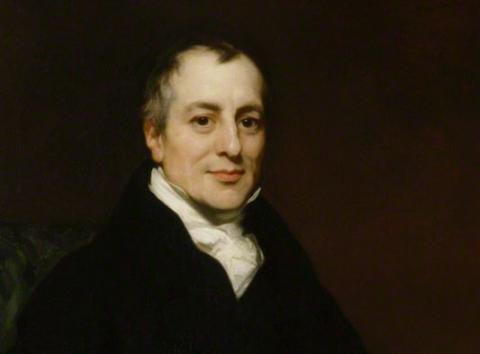 [Excerpted from Chapter VII of Principles of Political Economy and Taxation (1817). Ricardo, an economist of the "Classical School," deserves credit for having been among the first to point out the advantages of specialization and trade, even if one party to the transaction could produce everything better and cheaper than the other. Reprinted from Free Market Economics: A Basic Reader, compiled by Bettina G. Greaves.]

Under a system of perfectly free commerce, each country naturally devotes its capital and labour to such employments as are most beneficial to each. This pursuit of individual advantage is admirably connected with the universal good of the whole. By stimulating industry, by rewarding ingenuity, and by using most efficaciously the peculiar pow­ers bestowed by nature, it distributes labour most effectively and most economically: while, by in­ creasing the general mass of productions, it dif­fuses general benefit, and binds together, by one common tie of interest and intercourse, the uni­versal society of nations throughout the civilised world. It is this principle which determines that wine shall be made in France and Portugal, that com shall be grown in America and Poland, and that hardware and other goods shall be manufac­tured in England.

In one and the same country, profits are, gen­erally speaking, always on the same level; or differ only as the employment of capital may be more or less secure and agreeable. It is not so between dif­ferent countries. If the profits of capital employed in Yorkshire should exceed those of capital em­ployed in London, capital would speedily move from London to Yorkshire, and an equality of prof­its would be effected; but if in consequence of the diminished rate of production in the lands of Eng­land, from the increase of capital and population, wages should rise and profits fall, it would not fol­low that capital and population would necessarily move from England to Holland, or Spain, or Russia, where profits might be higher.

If Portugal had no commercial connection with other countries, instead of employing a great part of her capital and industry in the production of wines, with which she purchases for her own use the cloth and hardware of other countries, she would be obliged to devote a part of that capital to the manufacture of those commodities, which she would thus obtain probably inferior in quality as well as quantity.

The quantity of wine which she shall give in exchange for the cloth of England is not determined by the respective quantities of labour devoted to the production of each, as it would be if both com­modities were manufactured in England, or both in Portugal.

To produce the wine in Portugal might require only the labour of 80 men for one year, and to produce the cloth in the same country might re­quire the labour of 90 men for the same time. It would therefore be advantageous for her to export wine in exchange for cloth. This exchange might even take place notwithstanding that the commod­ity imported by Portugal could be produced there with less labour than in England. Though she could make the cloth with the labour of 90 men, she would import it from a country where it required the labour of 100 men to produce it, because it would be advantageous to her rather to employ her capital in the production of wine, for which she would obtain more cloth from England, than she could produce by diverting a portion of her capital from the cultivation of vines to the manufacture of cloth.

It would undoubtedly be advantageous to the capitalists of England, and to the consumers in both countries, that under such circumstances the wine and the cloth should both be made in Portu­gal, and therefore that the capital and labour of England employed in making cloth should be re­moved to Portugal for that purpose. In that case, the relative value of these commodities would be regulated by the same principle as if one were the produce of Yorkshire and the other of London: and in every other case, if capital freely flowed towards those countries where it could be most profitably employed, there could be no difference in the rate of profit, and no other difference in the real or labour price of commodities than the additional quantity of labour required to convey them to the various markets where they were to be sold.

Experience, however, shows that the fancied or real insecurity of capital, when not under the immediate control of its owner, together with the natural disinclination which every man has to quit the country of his birth and connections, and in­trust himself, with all his habits fixed, to a strange government and new laws, check the emigration of capital ...

David Ricardo was a British political economist, one of the most influential of the classical economists along with Thomas Malthus, Adam Smith and James Mill.

David Ricardo was a British political economist, one of the most influential of the classical...