GET NEWS AND ARTICLES IN YOUR INBOXPrint
A
A
Home | Mises Library | Down with the Rich, Again?

Down with the Rich, Again? 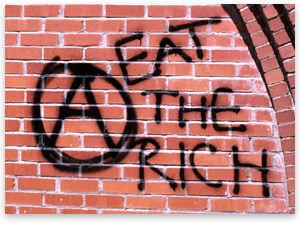 07/26/2010Llewellyn H. Rockwell Jr.
Maybe you saw the headlines blasting the rich (again!) for failing to spend money in order to enable us to get out of this ever-lasting recession. It turns out that in boom times, the rich spent $145 per day. Now they are only spending $119. So, there we go: a new scapegoat! Those greedy rich people are failing to do their duty.

The press reports that the rich are not booking at the Four Seasons, not putting on the Ritz, and not filling their closets with furs and jewels from Saks. It gets worse. The women who shop for goodies by Dries van Noten and John Galliano told the New York Times that their husbands are telling them to cool it on designer bags, shoes, and dresses. Yet another reason for the recession: patriarchy! Let those tax cuts expire!

But, still, I'm not entirely sure I can follow this. In normal times, we are told that the rich are rich only at the expense of everyone else. One man's wealth is another man's poverty. It's a fixed pie, and one reason for human suffering is precisely the tendency of the rich to spend their filthy lucre on fripperies. They engage in conspicuous consumption that does nothing but feed their egos even as the world's poor suffer.

Suddenly, the line has changed. Now it is the moral obligation of the rich to cough up in order to help the rest of us. Especially now that government stimulus has proven to be ineffective, the rich should make it their patriotic obligation to spend, spend, spend! To be sure, the left-leaning commentariat is not willing to go so far as to favor tax cuts for the rich. For that would put us "in an Alice in Wonderland world," says Sam Pizzigati of the Institute for Policy Studies, in which we help the people we are supposed to hate.

I'm just trying to come to terms with the intellectual model here. On the one hand, the rich are usually blamed for poverty simply because they have money while others do not. On the other hand, their failure to behave like rich people is also to blame for economic hard times. It's like this swath of the population can't do anything right.

Now, under crude Keynesian thinking, one can sort of make sense of this. The idea is that a rich person buys a yacht and that provides jobs for yacht salesmen, boat makers, wood finishers, boat repairmen, paint makers, and everyone else involved in making and maintaining the yachting world. These people get money and in turn spend it on clothes, booze, movies, and other things along those lines. This is the circular flow of perpetual economic motion that keeps the world afloat; any saving then becomes a "paradox" because it delays recovery.

The circular-flow model that sees spending as the fuel of economic activity fails to account for saving and investment, which come about only through deferred consumption. The view that economies grow through consumption leaves out the real drama behind the scenes. As Robert Murphy explains, "The finished goods you buy at the store are made of components that passed through probably thousands of different hands, in dozens of countries, before all coming together into the item you throw in your grocery cart."

The core problem with the economic boom is precisely that it led to wealth-consuming activities that secretly ate away the core productivity of the economic structure. What needs to happen is a retrenchment, a new pattern of saving and deferred consumption.

And why would people save? In order to spend later, once the foundations of future prosperity are rebuilt. But this takes time (another feature of reality left out of circular flow). The best approach the government can take is to back off, let people keep what they earn, and permit the economy to rebuild on its own.

In other words, tax cuts for the rich would in fact help get us out of recession. But there is no reason to limit these cuts to the rich. There should be tax cuts for everyone. And that has to go along with massive cuts in government spending too, so that we stop running debts that have to be paid later with inflated dollars.

In other words, stimulus and browbeating the rich to spend more are going to have exactly the opposite effect. They will delay recovery. In fact, the current political environment is following the script of the Great Depression in delaying prosperity year after year through terrible political ideas and policies.

The rich can indeed help us all, not by spending but by being thrifty and even miserly for as long as necessary to fix what the government has broken.