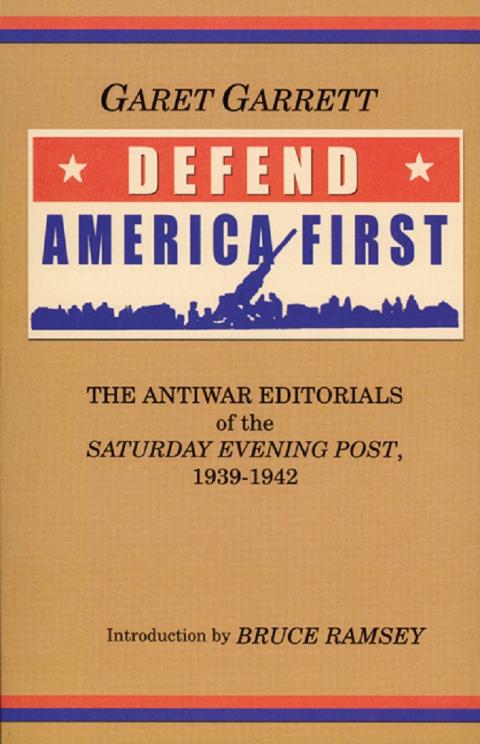 The U.S. entry into World War II is one of the issues that American political culture considers to be settled and not discussable. This was not the case in the run up to the war. One group of writers and intellectuals, who led a mass movement, opposed entry into the war. And not because they liked Hitler or otherwise.

Those people who opposed it had their careers and even lives run over by the war machine, but does that mean that we have nothing to learn from them? So few of their writings are around that it is hard to tell.

So in many ways, we need to be grateful to Bruce Ramsey, who has put together the writings of the most brilliant and prolific of the anti-war writers. They are by Garet Garrett, the novelist and opponent of the New Deal. He wrote for the Saturday Evening Post, one of the largest circulation periodicals in the country.

In editorials from 1939 to 1942, he laid out the rationale for staying out of Europe's war. As Ramsey points out in the introduction, the issues that we think about today were not issues then. There is little talk of Japan or the fate of European Jews. These were not the concerns of the war party. The real question was whether the U.S. ought to intervene in yet another European conflict that would inevitably have the U.S. linking arms with the Soviet Union.

From Garrett's point of view, American security was not really at stake. He predicted that an intervention would lead to a further loss of freedom at home, a bolstering of the Soviet dictatorship, a massive debt burden, an entrenchment of the executive state – all of which came true. Garrett saw these costs of war like few others and he made his views known.

These writings, then, are rare in our times when no one wants to think about the ways in which U.S. entry into the war sealed the "revolution within the form" that the New Deal represented. Garrett predicted that after we vanquished Nazism, we would have a further problem to deal with namely, the Soviet problem ("Having saved the world from Nazism, should we not be morally obligated to go on and save it from Bolshevism?"). He was right in every way.

This collection draws attention to the myriad ways in which U.S. involvement in the war began long before Pearl Harbor. FDR had been preparing the ground for war by abandoning American neutrality and assisting Britain in the war effort – all without approval from Congress and with very little knowledge by the American people. The tactics were an extension of those established during the 1930s.

These days nearly everyone says that the "good war" was worth the fighting but does that mean that the critics had nothing to say worth hearing? Garrett would say that this is the attitude we find in imperial dictatorships, not free countries. In many ways, then, this volume is a monument to the kind of critical thinking that freedom breeds and protects.