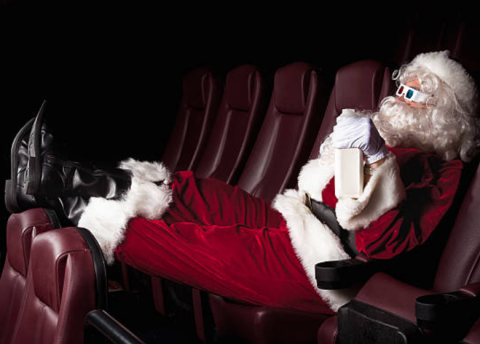 As Victorian England produced the classic Christmas literary work, Dickens's A Christmas Carol, 20th-century America has made its distinctive contribution: the Christmas movie. Unfortunately, this genre has continued Dickens's contrast of the Christmas spirit with the bottom-line heartlessness of business.

Many films aimed at the holiday box office are so poorly made and preposterous—the toy magnate in Santa Claus: The Movie, ludicrously overplayed by John Lithgow, stuffs teddy bears with glass shards and is willing to kill millions of children with exploding candy canes—that they flop and are forgotten. But two Christmas movies, Miracle on 34th St. and It's a Wonderful Life, have become classics. They are literate, ingenious, and compellingly acted. They are also too unfriendly to free enterprise.

Miracle, the lighter of the two, concerns the encounter of precociously cynical Susan Walker with the real Santa Claus. Susan's mother, a divorcee bent on imbuing her daughter with realism, is a middle-manager at Macy's in charge of the famous parade. Discovering at the last minute that her regular Santa is drunk, she replaces him with a likely-looking older gent off the street.

Kindly but eccentric—he calls himself "Kris Kringle" and claims to be Santa himself—he proves enormously popular as a Macy's fixture until he begins directing some parents to Gimbel's. He only keeps his job when Mr. Macy notices that the goodwill generated by this seeming disregard for profits actually helps business. Nonetheless, a malicious psychologist wants Kris committed, and even Susan begins to doubt him. Only heroic efforts by Mrs. Walker's lawyer boyfriend save Kris, who then gives Susan her heart's desire—a new house and a new Dad. In this way Susan learns trust and faith.

There are no villains in Miracle; Mr. Macy, his yes-men, and various public officials are portrayed as silly rather than evil. Its real target is the inability to appreciate life's wonders—a failing identified with concern for profitability, which is associated in turn with "commercialism," the "make-a-buck" attitude. Christmas teaches us that we all would be happier if Macy's and Gimbel's stopped competing.

But let's talk Christmas turkey. The engine driving the "commercialization" of Christmas is, quite simply, children's desire for presents. As every parent soon discovers, it is not the thought that counts for young children, but the goods. They want nice toys, which do not come free. They have to be made, and the cost of making them has to be recouped.

The division of labor allows the creation of a variety of toys—the typical parent cannot whip up a Lego set at home—and kids love the variety. Imagine what they would say if reformers restored "the spirit of Christmas" by banishing all the electric robots, the dozens of different Barbies, and everything that to adult eyes is a cheesy fad. To youngsters, a dazzling array of goods is the spirit of Christmas, and places like Macy's are magical because they display it. Perhaps the whole business of exchanging presents has gotten out of hand, but retailers are catering to, not creating, this consumer preference.

Large vendors like Macy's, by seeking efficiencies of scale, can afford a smaller profit margin on each item, which lets them make a great many things available cheaply. At one point in Miracle, Santa complains that the manager of the toy department is "pushing" on parents an item that is not moving. "The only important thing," says Santa, "is to make children happy." But if the toy department does not try to sell something it orders, it will have to raise the price of other items, and in the future pursue variety more cautiously. By selling as hard as it can, Macy's gives children more of what they want—toys their parents can afford—and that makes children happy.

Christmas, runs the message of Miracle and similar fables, should be a time not of material goods, but of things of the spirit. But what is the ordeal of Christmas shopping if not parents giving of themselves unto exhaustion for children and other loved ones? There was not more giving of self before enterprises like Macy's brokered manufactured goods, just giving in different ways.

Take the Christmas tree. Once a man would locate a nice spruce in the forest, chop it down, drag it home, and his family would festoon it with homemade ornaments. Total effort: about a day's worth. Today's urban paterfamilias buys a spruce someone else chopped down for his family to festoon with commercial ornaments. Suppose he earns $50,000 per year. A nice spruce costs about $50 and some new ornaments perhaps $100. That $150 is about one day's income, representing a day's effort. Each man has, directly or indirectly, exchanged his labor for a decorated tree. Who is to say which is more spiritual?

Life is a more ambitious film, with an intricate plot stretching from 1919 to 1947. George Bailey has spent what he regards as an unfulfilled life in the town of Bedford Falls running a "Building & Loan" association founded by his late father. A good man, he is less interested in profits than in helping people buy decent housing. He makes loans on the basis of character rather than demonstrated creditworthiness, with no indication given of the default rate.

Bailey is hated by Henry Potter, an angry cripple who "owns half the town," one of whose ventures is renting badly maintained tenements to the poor. To Potter, Bailey is "not a businessman" because he has "high ideals, so-called" and he contemptuously asks Bailey if he is "running a business or a charity ward."

What is not explained—what is never explained about the vindictive tycoons of fiction—is where Potter gets his money. (In the depths of the Depression, he is waited on by liveried servants.) He can't have made a fortune renting a few hovels, and none of the properties he owns will bring in a penny unless they offer something people want. So, although he is shown doing nothing but pushing other people around, Potter must be providing a valuable service or selling something in great demand.

Potter gets his first chance to break Bailey during the 1933 run on the banks, when Bailey's panicky stockholders want their investments back. Potter has already saved (and acquired) the remaining independent banks of Bedford Falls by guaranteeing their loans in exchange for control, and he tempts Bailey's stockholders by offering to guarantee the loans owed to the association if they sell him their shares at half price. But Bailey foils Potter's plan to capture his company by tiding his stockholders over with small loans from his own pocket until the banks re-open.

Let's stop the music here to ask why Potter would tender his offer. Presumably, Potter was willing to take over the banks because he believed there was money to be made from owning them. If he wants Bailey's B&L, he must likewise believe it is profitable, and that the loans outstanding will be repaid. But why would he think this if, as he says, "Bailey has never made a dime?" Why would he buy something worthless for any fraction of its original price, or guarantee loans he thinks he will end up paying?

It is suggested that Potter is driven by pure spite, but if so, if he is willing to take a loss just to hurt Bailey, he is acting directly contrary to profit-maximization. Perhaps Potter hopes that buying out Bailey will give him a housing monopoly, allowing him to raise rents as much as he pleases. But he must also realize that he is powerless to prevent other upstart lenders from invading his market by offering comparable services at lower costs.

Closely related issues are raised by Bailey's most idealistic venture, a development of attractive private homes meant for the likes of Potter's tenants. Bailey shows his essential goodness by personally helping the humble Mr. Martini, his umpteen children, and even his goat move in. Potter, of course, is further infuriated—when he should be asking how Mr. Martini can afford his new digs, or, equivalently, how Bailey could afford to build them.

However carefully Bailey controls costs (no more carefully than Potter, one assumes), his nice houses must be more expensive to construct than tenements. If the interest on the Martini mortgage comes to no more than the rent for a Potter-built hovel, Bailey will lose money or make very little, his stockholders will pull out, and Bailey will be left bankrupt. If on the other hand Bailey does charge more than Potter but Martini can and is willing to pay it, why did Martini live in squalor for so long when he could have moved elsewhere or, indeed, taken out a mortgage on a new house? In other words, if Potter's slums are overpriced, Bailey has filled a market niche attractive to any entrepreneur, occupation of which does not require moralistic huffing and puffing.

Potter finally gets his chance to ruin Bailey when Bailey's drunken uncle, loyally retained as financial officer (don't Bailey's stockholders care about personnel policy?), unwittingly leaves $8,000 of the firm's money on Potter's wheelchair. Potter of course keeps it, and, with the money missing, Bailey faces imprisonment. He is about to kill himself when an "angel, 2nd class" intervenes, showing Bailey that his life has been well-spent because of the good he has done. Bailey embraces life anew, and, in the final scene, everyone he has helped over the years chips in to lend him the missing money. There is not a dry eye in the house.

It seems to have eluded the creators of Life that two key elements of this denouement work against the profit-is-dubious, altruism-is-good message. First Potter's knowingly keeping the $8,000 is not a market transaction, since the money is someone else's property not acquired in a voluntary exchange. Potter's malefaction is just the sort of behavior the market forbids, and if discovered would lead to criminal penalties.

Second is the matter of the angel, Clarence, commissioned by Higher Powers to save Bailey from suicide. Now, Clarence is a bit of a bumbler who has spent several centuries in Heaven without getting his wings, and he is told at the outset that he will get his wings if he saves Bailey.

Of course, Clarence does not undertake the mission for the purely self-interested purpose of advancing himself. He is as kind as angels should be, and really wants to help. But the fact is that he does not save Bailey as an act of pure goodness, and the audience is expected to rejoice when, as a result of his efforts, he rises in the celestial hierarchy. Even in Heaven it is recognized that useful services should be rewarded.

The President as Social Engineer